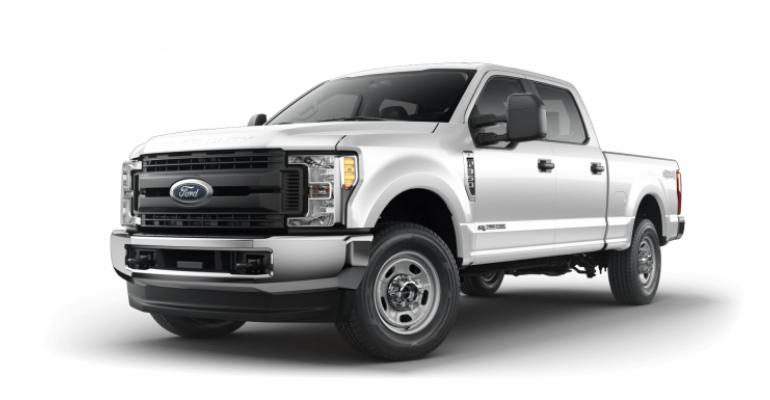 Ford won&rsquo;t make a big new-product splash until 2018 and beyond, but with a handful of key updated models, service initiatives such as Quick Lane and a still strong retail environment, officials express confidence as they head into the new year.&nbsp;

NEW ORLEANS – A predicted easing of new-vehicle demand in the U.S., rising price pressures and a short-term lull in new-model introductions appears to have Ford officials undeterred heading into 2017.

Speaking with reporters following its annual franchise meeting with retailers at the NADA Convention and Exposition here, top executives and the brand’s dealer-council head say Ford remains well-positioned in the face of what many see as only light headwinds in the marketplace this year.

“I think it’s yet to be determined if we’re heading into a plateau,” says Stephen Odell, executive vice president-global marketing, sales and service. “There’s a growing consensus the industry could run at (2016’s record level of 17.5 million units) or maybe even go above.

“For us, it’s a matter of continuing to do what we do. We’ve got a very constructive relationship with the dealers, and (that) means we ask each other for things, we discuss them and then we work out how we go forward.”

“We spend very little time on our (dealer) council talking about keeping (retailers) price-competitive,” he says. “We spend more time on how we can take advantage of technology, the customer experience (and) service initiatives.

“Last year, industry incentive spending was up, but transaction prices were up (too),” he adds. “We’re benefitting greatly from the shift into utilities and trucks. And dealers for the most part have been satisfied with our level of competitiveness in how we go to market. We’re working (more) on how we take advantage of technology to really provide a great customer experience.”

Ford’s big product bang won’t come until introduction of a new midsize Ranger pickup and EcoSport small CUV in 2018 and Ranger-based Bronco SUV that returns to the lineup in 2020.

But Odell is confident a handful of refreshed models due later this year or launched in 2016 will keep customers coming to the showroom in 2017. The list includes a revamped Expedition SUV due in 2017, recently launched F-Series Super Duty models, upcoming facelifted Mustang and a restyled Escape CUV that rolled out last year.

“People gain awareness of products over time, so we’re very comfortable with our products,” he says. “We’re just in the throes of (the Super Duty launch). I think there’s a hell of a lot of opportunity out there.”

William Jarrett, a Florida retailer who chairs the Ford dealer council, echoes Odell, saying there should be enough to work with in 2017, though he admits to some uneasiness over the weakness in the sedan market.

“We’re actually pleased with the lineup that’s come out from Ford,” he says. “We think we cover all the bases quite well. (There’s) the excitement of the Expedition coming (and) our SUV lineup is solid.

“We have some concerns with car models – as the whole industry does – as to what does the public want the future to look like with the 4-door sedan,” he adds. “We’re trying to listen and learn.”

Longer-term, Jarrett says he’s particularly encouraged by Ford’s plans to invest $4.5 billion in 13 new electrified vehicles by 2020. The list includes a 300-mile-range (480-km) battery-electric CUV, a hybrid-electric Mustang and a hybrid F-Series for 2020, plus an electric autonomous vehicle for 2021.

“We’re extremely excited with the new announcements on electrification as we think ahead five, 10, 15 years out,” the Ford dealer says.

“We’re quite comfortable with the relationship and our ability to take on the possible together,” he adds. “There’s never been more line of sight – the art of the possible – between the manufacturer and dealer. And the communication couldn’t be stronger.”

One Ford push that appears to be working is the Quick Lane program that has dealers building satellite repair and service centers that Jarrett says are drawing new customers to the brand. Ford recently announced it would provide service parts for non-Ford brands through the Quick Lane operations.

Last year marked the fastest growth pace ever for new Quick Lane service points, LaNeve says, adding most of the new facilities were built by dealers away from their showrooms.

“They started with onsite (facilities), maybe a separate building, and now they’re putting them offsite within their assigned (market) area,” he says. “(Customers) want to save time, save money (and for service to be) convenient. That’s the world we live in. And it’s been a great asset to the business.”

Jarrett says the concept is hitting its target.

“It provides a tremendous avenue into other OEMs and the owners of other OEMs’ products,” he says of the satellite service operations. “Probably 30%-35% of what comes into the shops are non-Ford and Lincoln products. It’s a very valuable asset.”

Ford execs also echo a theme hit hard by CEO Mark Fields in his keynote speech here on Friday, saying dealers will pay a critical role as the automaker moves into the mobility sector with car-sharing, ride sharing and, ultimately, automated vehicles.

“We’ve gone at length to say the future, as it evolves involves dealers,” Odell says. “We see dealers as a key attribute. We live in a physical world. And there’s no doubt we see having 10,000 local people in local businesses (worldwide) where connectivity solutions will come into play is actually a physical advantage for us.”

Ford says it won’t follow FCA US in adding dealers. Automotive News reported Friday that FCA was looking at 400 new showrooms as a way to help build market share in the U.S.

“We’re very comfortable with the number of dealers we have,” says LaNeve, who notes Ford’s dealer count dropped by 700-800 during the 2008 recession. “We’ve (now) got about 1,200 in the major markets and another 1,800 in smaller single-dealer markets. We will be adding a dealer in the Dallas market, but those instances are few and far between. We’re very comfortable with the throughput we’re getting now and the existing makeup of our dealer body.”