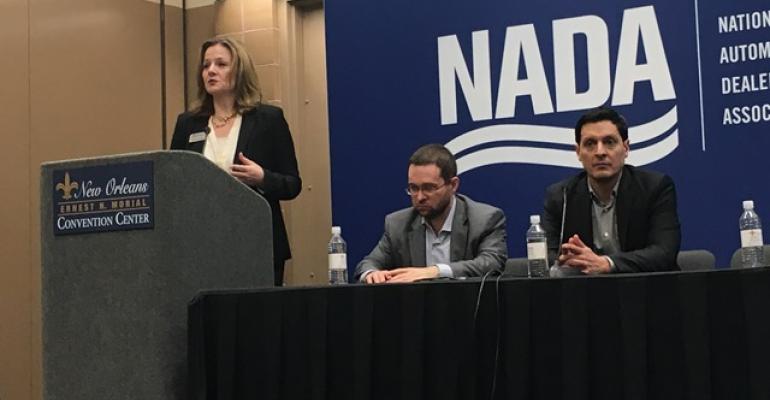 Slowing new-vehicle demand and falling used-car values threaten to set off a pricing spiral in the U.S. market.

NEW ORLEANS – The economy looks solid, but auto industry economists and analysts are concerned a softening used-vehicle market and rising incentives on new cars and trucks could send the industry into an unwanted spiral.

Steven Szakaly, chief economist for the National Automobile Dealers Assn., which is holding its annual convention and exposition here, says although he’d like to see a somewhat healthier housing market, there are no red flags where the economy is concerned.

In fact, if President Trump follows through on promises of major infrastructure investment and tax cuts, even more upside is possible.

“A lot has changed, particularly in Washington,” Szakaly says. “Let’s say that Trump passes all of his tax cuts and all of his infrastructure spending. That is going to be a big boost to economic growth and economic activity.”

That said, Szakaly is forecasting a decline in light-vehicle sales this year to 17.1 million units, a drop from 17.5 million in 2016 and continued slide to 16.7 million vehicles in 2020. That contrasts with a J.D. Power forecast issued yesterday that calls for sales this year to slightly top 2016’s record volume.

But of greater concern than the slow reduction in new-vehicle demand over the next couple years may be what’s happening on the pricing side, Szakaly and other analysts here say.

“Supply is now recovering to trend,” he notes. “We’re moving back into a normal state.”

But Banks worries the slowly shrinking new-vehicle market will encourage automakers to offer even higher sales incentives already averaging a record $4,000 per unit. That in turn is lowering values on used cars and trucks, and Banks fears the industry could be headed down a dangerous path.

“(Incentives) will put more downward pressure on used (cars),” he says. That in turn will make used-vehicle prices more attractive to consumers and further shift the market away from new. “Then OEs will further lower new-vehicle prices. It could be a vicious cycle. Incentives are what everyone needs to watch.” The secondhand market, already flooded of late with attractive, 3-year-old off-lease vehicles, already is beginning to draw more prime-rated customers away from new cars and trucks, Melinda Zabritski, senior director-automotive finance for credit-tracker Experian, points out.

“The used-car market (now) is very prime,” she says. “Prime buyers (those with credit scores of 661 or above) are very attracted by off-lease vehicles.”

That could start to pressure automakers, Banks says. “If you’re losing buyers to used, when do you cut your production? You have to sell your production. If incentives increase, we could run into a serious problem.”

“Hopefully not,” Zabritski says when asked if the industry is headed toward another leasing residual bubble that severely pressured profitability at some captive finance arms in the 1990s. A more likely outcome, she says, is that consumers with expiring contracts may not afford their next lease as easily.

“Consumers no longer have their (next) down payment right in their driveway,” Banks says.

Vehicle buyers already are taking on more debt, Zabritski notes. Long-term loans of up to 72 months now are the norm as buyers look to cope with higher prices and the shift they’re making from sedans to more expensive trucks and utility vehicles, Zabritski says.