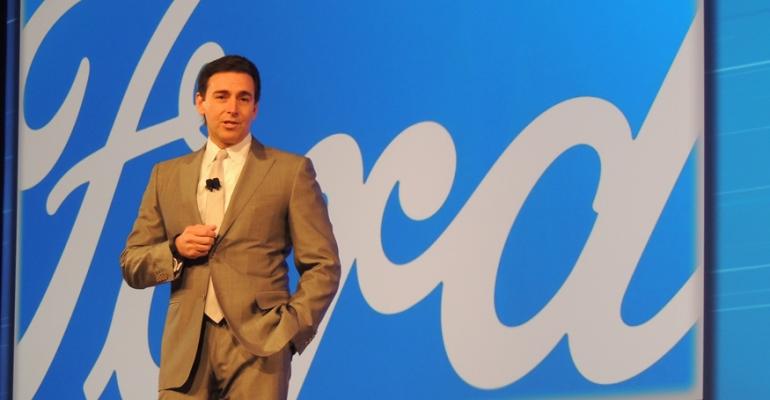 Detroit automakers lobbied for a single fuel-economy standard nationwide that would eliminate requirements such as separate electric-vehicle sales bogeys in California and 11 other states.

NEW ORLEANS – Detroit automakers made the case for a single, nationwide fuel-economy standard that would take into account market factors in their meeting with President Trump earlier this week, Ford CEO Mark Fields says.

A single standard would mean the elimination of separate rules under the California Air Resources Board, which currently requires automakers to sell certain numbers of zero-emission – or battery-electric – vehicles. The California rules are followed in 11 other states and the District of Columbia.

Fields met with Trump twice this week, first as part of a group of manufacturing executives and the following day as a representative of the auto industry, when he was joined by General Motors CEO Mary Barra and Fiat Chrysler Automobiles CEO Sergio Marchionne.

Speaking to U.S. dealers at the National Automobile Dealers Assn. Convention and Exposition here, Fields says Trump asked manufacturing executives to list four or five regulations controlling their industries that they believe are good and another four or five others they think impede their ability to do business. He then promised to reconvene with the group in a month to discuss the issues.

In the meeting with the Detroit 3, Trump again asked for the automakers’ wish list on regulations.

“We talked about a reasonable fuel-economy, one national standard implementation that would be aligned with market realities, affordability and jobs,” Fields says in a discussion on stage with outgoing NADA Chairman Jeff Carlson. “We talked about trade pacts, tax policy. He was very conversant in these areas. And I think he’s going to be very good for our industry.”

That drew applause from the dealer audience.

Fields did not elaborate on the trade discussion or how that might impact the ability for automakers to source vehicles from outside the U.S., particularly Mexico, where Trump has threatened to apply a 20% tax on imported goods.

Fields emphasizes that the three automakers did not advocate getting rid of current mileage and related carbon-dioxide emissions standards.

“We think having one national standard for fuel economy is really important,” he says. “We said according to studies up to 1 million jobs could be at risk if we’re not given some level of flexibility in aligning with market realities.”

The meeting with manufacturing executives was wrapped up inside the Oval Office, where Trump was eager to get some feedback on his recent redecorating.

“We go in there, he’s showing us around (and) he says, ‛Do you like my new curtains? How do you like the carpeting? I picked this one, what do you guys think?’” Fields says.

The Ford CEO also assured dealers here they would play a vital role in the automaker’s move into the mobility sector with its car-sharing, ride-sharing, connectivity and autonomous-vehicle initiatives.

“We strongly believe the dealer is going to play a very important role going forward,” he says. “Ten or 12 years ago, we didn’t have a very good relationship with our dealer network. It just wasn’t healthy.

“We looked at ourselves during the downturn and said, when we say ‛profitable growth for all,’ we mean it.”