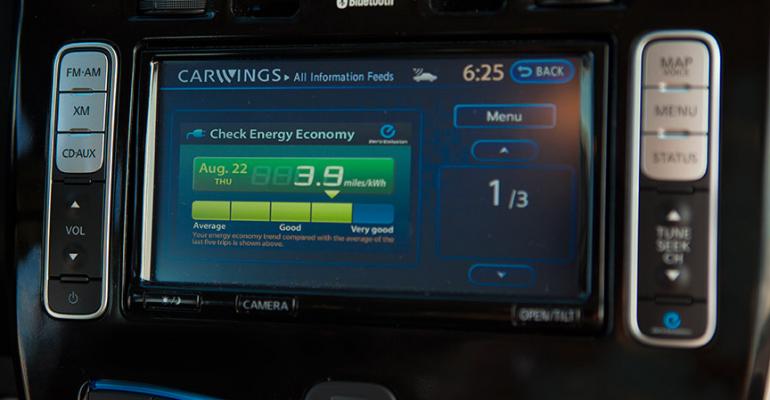 If the Leaf EV&rsquo;s app were able to gauge the health of the car&rsquo;s battery pack, Nissan could avoid incidents like those in Arizona two years ago.

NOVI, MI – Nissan wants to be able to collect and analyze battery health data with the next generation of its Carwings app for its Leaf electric vehicle.

The automaker was caught by surprise two years ago when Leaf owners in hot-weather states, including Arizona, began experiencing what they said was premature degradation of their cars’ air-cooled lithium-ion battery packs. It evolved into a major drama in the EV world, as Leaf owners thought Nissan should have been more proactive to their initial complaints.

After executives met with affected Leaf owners in Arizona Nissan bought back some of the EVs and enhanced the car’s warranty to repair or replace a Li-ion battery pack that loses more than three of its 12 bars, or roughly 30% of its capacity, in five years or 60,000 miles (96,561 km).

If Carwings were able to gauge the health of the Leaf’s Li-ion pack, the automaker could head off such a problem in the future, Robyn Williams, senior marketing manager-vehicle connected services for Nissan North America, tells WardsAuto here at a recent telematics conference.

“Perhaps in the future we’ll be able to give much more specific information back to the customer about the degradation of the battery and about the battery life, and even make recommendations on their driving or charging styles to help elongate their battery life,” she says.

Right now Carwings can tell users, and Nissan, fairly typical EV metrics such as battery state-of-charge and where the nearest charging station is located, as well as allow a user to begin battery charging remotely.

With data collected by a future version of Carwings, Nissan could detect “certain signals within the battery to predict what the battery life is going to be,” Williams adds.

Despite its current, relatively limited, capabilities, Nissan has found Carwings invaluable nonetheless, Williams says, noting in a panel discussion here that it was intimidating for the automaker to launch a mass-production EV in late 2010. But being able to see how Leaf owners are using their cars via the app has allowed Nissan to “make improvements to quality and all aspects of ownership, not just while the customer is driving the vehicle,” she says.

As for other information that the automaker could collect on Leaf drivers or those behind the wheel of the brand’s other models, Williams says Nissan is not opposed to the burgeoning field of “insurance telematics,” that is collecting driver behavior data for the purposes of possibly lowering his or her insurance costs.

Nissan likes to seek out exciting innovations, but also is aware many of its owners are “pragmatic,” she tells panel attendees.

Citing data revealed at the conference here showing 61% of customers are very concerned about providing personal data in exchange for services, Williams says that indicates 39% of the population believe “there’s a huge opportunity to exchange their data in return for additional services, like insurance telematics.”

However, Nissan would want to make such a feature “not intrusive” and “completely optional.”

Others on the panel debate the future willingness of consumers to have their driving, or other behavior behind the wheel, tracked and disseminated.

Oracle’s Pradeep Suchdeo, a solutions specialist, says there must be a clear return for consumers.

“‘Is there something I’m getting in return for the information I’m providing?’” he asks. Suchdeo believes the younger generation, which already has “documented their life on Facebook,” may be more open to giving up information than older drivers.