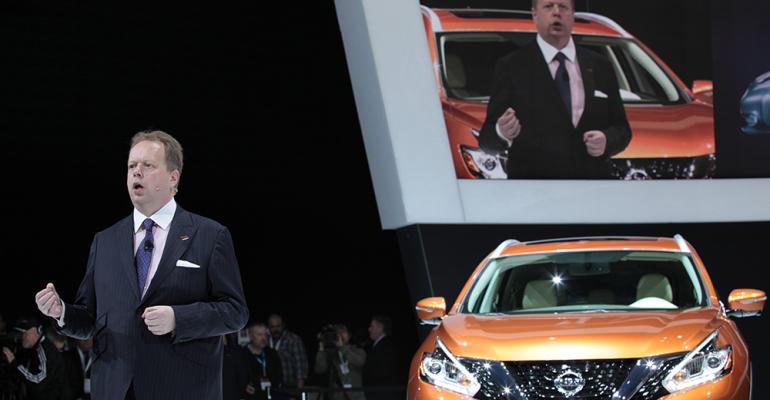 The executive also promises the slow-selling Cube will live on in a future iteration, but not as the curvy MPV it is today, and pledges the next Titan large pickup will be an &ldquo;all-American&rdquo; truck.

NEW YORK – Nissan Executive Vice President Andy Palmer says if an incentive war erupts in the coming months in the U.S., as automakers seek to maintain market share in a growing sales environment, his company will not fire the first shot.

Palmer also promises the slow-selling Cube will live on in a future iteration, but not as the polarizing CUV it is today, and pledges the next Titan large pickup will be an “all-American” truck.

“We certainly wouldn’t trigger (an incentive) war; it’s not in our interest,” says Palmer, who additionally serves as chief planning officer for the Japanese automaker in North America.

Palmer points to the cutthroat midsize-car segment, where spiffs can drive sales leadership month-to-month. The Nissan Altima and Toyota Camry alternated segment leadership in January and February, and Palmer says its rival reclaimed the crown in March because he refused to match discounts.

“We let that go. We’re not chasing the No.1 spot,” he tells WardsAuto during in an interview here. “We’re going to stay disciplined on incentives.”

However, it might be difficult for the industry to hold back. The seasonally adjusted annual rate of sales in March reached 16.3 million units, the industry’s best performance since February 2007, according to WardsAuto data. Incentives, as well as a number of sales carried over from January and February when poor weather delayed purchases, helped fuel the big gain.

WardsAuto sources suggest the incentive play has continued and perhaps escalated in April, as automakers battle to maintain market share in the expanding sales environment and maintain the big year-over-year sales increases witnessed in 2013 and 2012.

Inventories also remain somewhat elevated, closing March at 3.67 million units, 13.3% above year-ago and equal to a 62 days’ supply, which could lead OEMs to spur a sell-down rather than trim production.

Nissan inventories were at a 52 day’s supply at the end of March, compared with 50 in March 2013.

“It’s probably one of the biggest conversations I have with my North American colleagues,” Palmer says of monthly marketing spends, which incentive-estimator TrueCar pegged last month at an average of $2,773, up 7.9%, or $203, vs. like-2012. Chrysler was the biggest spender and Nissan was sixth.

“In general, growth should be natural,” Palmer says. “When you lose the incentives it snaps back like an elastic band.”

Palmer expects the funky Cube small CUV to snap back, too, a car expected to see its first redesign for the U.S. in 2015 as a ’16 model. It launched here in 2008 as an ’09 model after several years of sales success in Japan, and the segment in the U.S. is just catching fire.

Palmer says U.S. buyers likely will embrace the new Titan large pickup, coming next year in a more competitive iteration than any of its past 12 lackluster years in the market, and news Toyota would match Nissan with a  5.0L Cummins V-8 turbodiesel engine in its next-generation Tundra due in 2016 doesn’t surprise the executive. 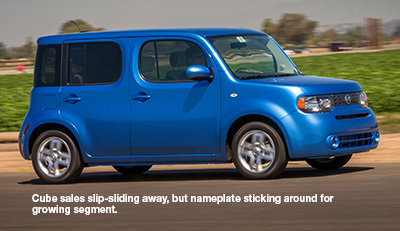 “We didn’t do any exclusive deal with Cummins,” Palmer says. “Cummins is able to sell to whoever they would like. They make a great engine, that’s why we chose them.”

Palmer instead finds it ironic that Toyota will follow Nissan with a Cummins diesel for its trucks, according to a WardsAuto forecast, shortly after the rival announced a new alternative-powertrain play on the heels of the groundbreaking Nissan Leaf.

“I’m pleased to do their product planning for them,” he says with a laugh.

Palmer promises the next Titan will be the most appealing yet after being developed entirely in the backyard of truck sales leaders General Motors, Ford and Chrysler. The Titan was engineered in Farmington Hills, MI, designed in California and will be built in Canton, MS. Its diesel comes out of Columbus, IN.

“The next fullsize pickup is genuinely an all-American product,” he says. “It doesn’t get any more American than the product we’re developing.”

In fact, Palmer suggests, the Titan must be better than any large pickup on the market to make a dent in Detroit Three’s dominance of the segment.

“We’ve got everything to prove,” he says.

Nissan’s Munoz Counting on Another Record Year for Leaf
Jan 15, 2014