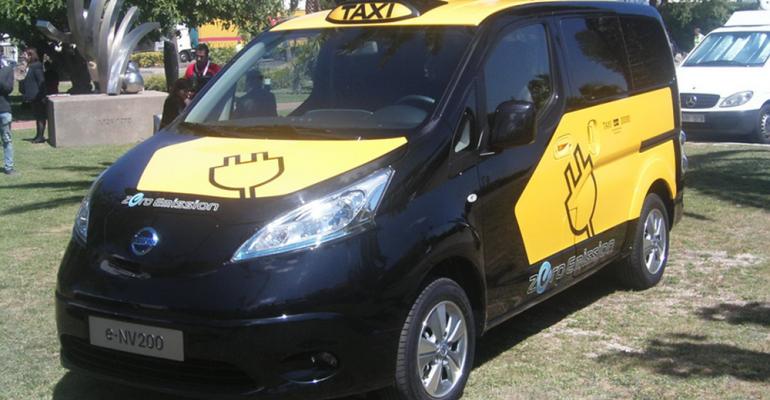 <p><strong>City of Barcelona to promote use of Nissan EV in taxi fleet.</strong></p>
Industry News

Nissan targets annual production of 20,000 units of its second electric vehicle for export to 20 global markets, including Japan.

The all-electric e-NV200 is derived both from Nissan’s NV200 light-commercial vehicle powered by an internal-combustion engine and from the Japanese automaker’s first EV, the Leaf.

Nissan has invested €100 million ($136.7 million) in the Barcelona plant to produce the eNV200 cargo van and two passenger versions of the EV, the Combi and the better-equipped Evalia. The automaker is targeting 20,000 annual e-NV200 assemblies for export to 20 global markets, starting with Japan in June.

The location of the battery pack between the two axles and under the cargo floor lowers the vehicle’s center of gravity while increasing the torsion stiffness of the assembly 20% and the lateral stiffness, 30%.

Although the e-NV200’s batteries have 48 lithium-ion cells, the same number used in the Leaf, they are configured differently to fit the available space. These modules are shipped to Spain from Nissan’s manufacturing facility in Sunderland, U.K.

The batteries are designed to be fully recharged by plugging the vehicle into a single-phase 16-amp, 3,300-watt household outlet for 10 hours. With an electrical installation of 6,600 watts and 32 amps, charging time is reduced to four hours.

A 50,000-watt CHAdeMO DC quick charger can recharge the battery to 80% in just 30 minutes, but Nissan engineers do not specify the range provided by this fast recharge, probably far less than 80% of the 106 miles (170 km) expected with a full recharge according to NEDC standards.

The e-NV200 borrows many elements of the ICE-powered NV200, including most of the body.

From the Leaf, the e-NV200 inherits a MacPherson-type front suspension and the propulsion system, including the recent second generation of asynchronous AC electric motor making 109 hp. This engine is completely integrated with the battery charger and inverter, and has been adapted to the specific constraints of an LCV.

Also migrating from the Leaf to the e-NV200 is a brake system with greater regenerative capacity to take advantage of the frequent starts and stops typical of delivery activity and recover energy, especially during deceleration, to recharge the batteries.

Externally, the most obvious difference between the e-NV200 and its ICE counterpart is the EV’s adoption of frontal Leaf elements, such as the central flap under which the socket for battery-recharging is located and headlights with blue LEDs.

Inside the e-NV200 stands out the instrument panel with digital reading and the shift lever, now similar to the one of an automatic or robotized gearbox.

The e-NV200 has a 5-year warranty, including batteries.

The City of Barcelona plans to promote use of the e-NV200 as its emblematic taxicab. Officials do not say whether subsidies will be provided, but the city appears committed to installing EV-recharging infrastructure.

Nissan Executive Vice President Andy Palmer, who was present for the official e-NV200 production launch, stressed that government financial support is crucial in the first phase of EV implementation in a market.

Asked by WardsAuto about the status of a lawsuit over New York City’s plan to exclusively use Nissan NV200s as taxis, Palmer says the pending litigation is against the city, not Nissan.

“We are watching the evolution of the litigation, but meanwhile we have already signed two agreements with different U.S. taxi companies in order to provide them our NV200 taxi cab,” he says.

Palmer says Nissan currently is not considering introducing Barcelona-built e-NV200s in the U.S. retail market through the Nissan sales network, the Chevrolet sales network or both, but the idea has not been discarded, either.

“In the case of a move to market the e-NV200 in North America, we will probably assemble the vehicle there as, for safety regulations, the NV-200 sold in the U.S. is longer than the NV200 marketed in other countries,” he says. “Of course, it should be possible to ship some components and elements from Barcelona or Sunderland to the U.S.”

“Of course, if Chevrolet wants to market an electric version of its Chevy City Express – our NV200 – we will be very happy to supply them as many units of their e-City Express as they need.”

Asked about the profitability of the Nissan EV, Palmer says Nissan does not make vehicles to lose money.

“This is the EV’s time,” the executive says. “We have invested about €4 billion ($5.5 billion) in zero-emissions vehicles and our Leaf is the (EV) model most sold in the world. In this moment we do not lose money with the Leaf, and we are preparing an Infiniti EV.

“Due to the increasing sales of the Leaf, we got in 2013 a lot of money selling emissions credits to other car makers, as we enjoy three different emissions credits in the U.S,” Palmer says. “Delivery vans and taxicabs are the main pollutant sources in the urban areas, and with our Leaf and e-NV200 we contribute to remove the pollution from cities.”