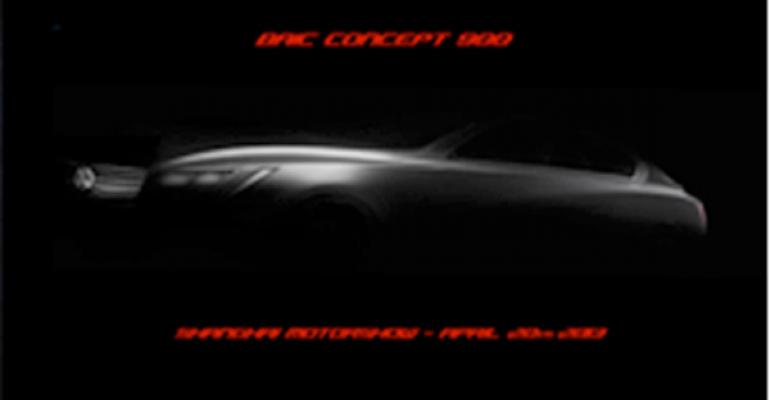 The concept is a 4-seat limousine of about 16 ft. in length. It is built on the Mercedes E-Class platform, which the German luxury maker is considering offering to its Chinese JV partner for use in future cars.

TURIN, Italy – A team of designers working here and in China under the leadership of Leonardo Fioravanti, chairman of the Italian Coachbuilder Assn.,will stop attendees in their tracks at the Shanghai auto show, opening April 21, with BAIC’s Concept 900 car.

The state-owned auto maker’s new “Chinese Dream Car,” built in Italy, is a description of what BAIC is promising to buyers of large and medium-size cars of tomorrow, with proprietary design and body engineering.

Few details have been released ahead of a press conference scheduled for April 20. However, sources say the concept is a 4-seat limousine of about 16 ft. (5 m) in length.

It is built on the Mercedes-Benz E-Class platform, which the German luxury maker is considering offering to its Chinese joint-venture partner for use in future cars. As such, the flagship car from BAIC might well come with a Mercedes 6-cyl. engine and, perhaps, a new brand name.

Offering BAIC an entire vehicle platforms from which to build cars is a highly unusual move and underlines the difficulty both partners are facing in China, Reuters reports. The Mercedes brand is lagging BMW and Audi in sales, and part of its strategy to close the gap includes buying a 12% stake in BAIC for €640 million ($822.3 million). 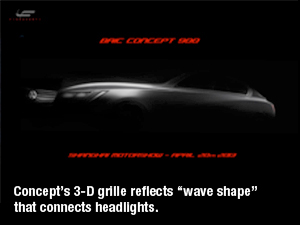 However, no final decision has been made as to whether components and platforms can be used by BAIC in the future, and if so which ones, Mercedes finance chief Bodo Uebber tells the news service.

The first aim of the show car is to create a new brand identity for BAIC’s coming range of “prestige” models, the Chinese auto maker says. The concept’s front end carries a distinctive 3-D grille, reflecting a trendy “wave shape” that connects the two headlights at each side.

The BAIC Concept 900 “reveals in advance and summarizes the styling guidelines, the DNA of the next premium vehicles of the BAIC product portfolio,” Fioravanti says in a statement.

The most outstanding feature of the show car is the large carbon-fiber gullwing doors. They will not make it to production but have been built to allow a better view of the simple, yet sophisticated interior.

“(The car) has been designed pursuing the philosophy ‘more with less,’” Fioravanti says. For example, the dashboard utilizes touchscreen technology instead of traditional knobs and switches.

Two wide monitors, one for the front passenger and the other in the rear compartment, fulfill most of the functions assigned to the traditional buttons.

“The show car has been built in record time by Italian craftsmen and technology,” Fioravanti says. “This reflects the unique potential of our area (Turin) as the world capital of design and development of new cars bodies. The concept was actually built in only 9½ weeks.”