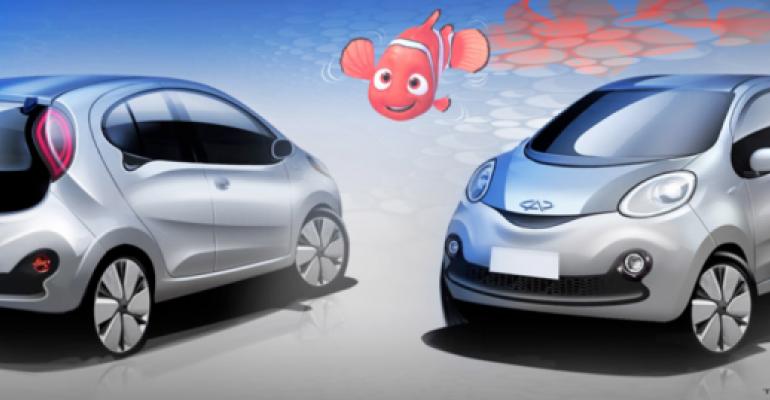 The studio took its inspiration from cartoon characters, creating a smiling front end surrounded by smooth and rounded features for the second-generation car.

TURIN, Italy – The new Chery QQ is just one of many production and show cars designed and/or engineered in Italy that will be unveiled at the Shanghai auto show later this week.

Whereas the first-generation Chery QQ was a clone of the Korean-designed Chevrolet Spark, the new generation reflects proprietary styling commissioned to Italian specialist Torino Design.

In its directive to Torino Design, Chery asked for a cute, trendy and agile city car that would combine fashion with functionality, the type of vehicle that has found widespread appeal among first-car buyers in China.

The studio took its inspiration from cartoon characters, creating a smiling front end surrounded by smooth and rounded features. The QQ’s guiding concept was to offer a vehicle that is fun to drive on city streets.

Chery says “happiness brings happiness to the driver and to other drivers. The more QQs driving around, the happier the whole city will appear.”

The auto maker describes the new model’s exterior as soft and fluid, like a water drop. Roundish elements and smooth lines connect the side with the rear end. The Day Light Opening (side windows) represents the letter Q, with the rear door handle providing the Q’s curl.

The air intake and front fog lamps, like butterfly wings, are reproduced in the rear bumper, creating a smile for the back of the car, as well.

Large glass surfaces enlighten the cabin so that it appears bigger and brighter. The interior, also inspired by cartoon characters, is characterized by round and colorful elements, including in the center console and door trim. The letter Q is designed in at the top of the instrument panel.