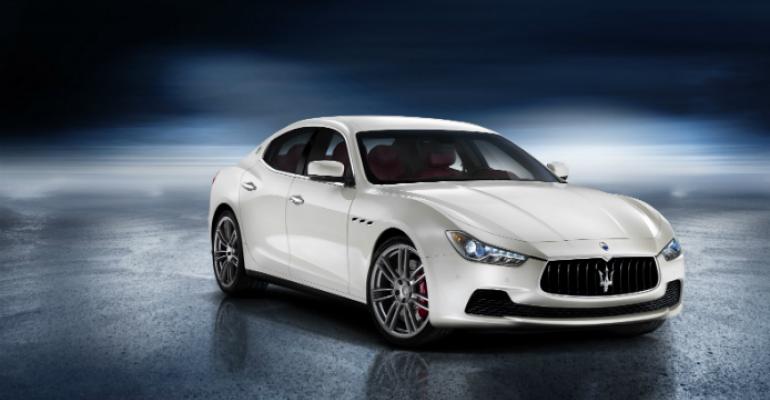 The new addition to the Maserati range has been developed in cooperation with Chrysler engineering. The platform also will serve as the starting point for a new Alfa Romeo flagship.

TURIN – Maserati will unveil its new Ghibli sport sedan at the Shanghai auto show this month, with sales to follow soon after, the auto maker says.

The "small Quattroporte" is in the early stages of production at Maserati’s factory in nearby Grugliasco.

This marks the third time the name Ghibli is being given to a high-performance Maserati. The first, designed for Maserati by a young Giorgetto Giugiaro at Ghia, was a stunning success when unveiled at the 1966 Turin auto show. A direct rival of the Lamborghini Miura and Ferrari Daytona, it was built between 1967 and 1973.

The name made a comeback in 1992 with a derivative design of a 2-door sport sedan styled by Marcello Gandini.

The new addition to the Maserati range has been developed in cooperation with Chrysler engineering. The platform also will serve as the starting point for a new Alfa Romeo flagship.

The Ghibli is meant to be the volume model in Maserati’s lineup, joining with the soon-to-be-launched Kubang SUV to take brand sales to a targeted 50,000 units annually within the next three years.

Maserati also plans to add a new 240-hp 3.0L V-6 diesel to its lineup as part of its growth strategy. Supplied by VM Motori, it is a derivative of the engine available in the bigger Quattroporte.

In Shanghai, Maserati also will launch its Quattroporte V-6 specifically tuned for the Chinese market, with output cut to 330 hp from the current 410 hp.