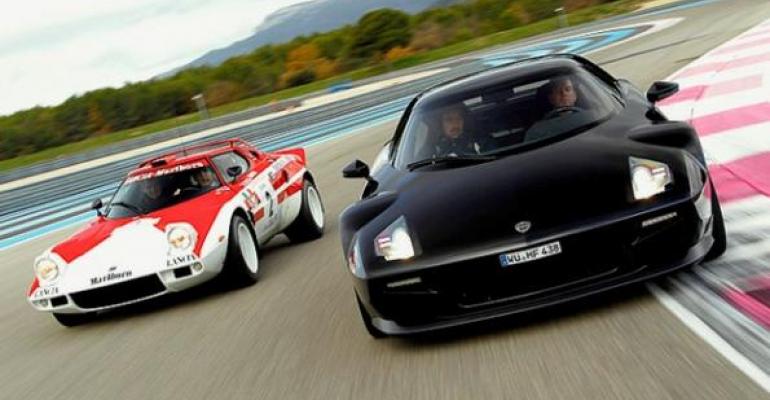 <p><strong>Manifattura Automobili Torino founder and owner Paolo Garella says he has received four firm orders for the New Stratos so far and is confident the portfolio soon will reach the 25-unit limit he has set for the lot.</strong></p>

A new automobile brand debuting at the 2018 Geneva auto show will be unveiled to the world press March 6. The company is called Manifattura Automobili Torino, and its first limited production offering is the New Stratos.

The founder and sole owner of the company is Paolo Garella, a familiar face in high-performance automotive circles.

The first unit of the New Stratos was commissioned by billionaire Michael Stoschek, whose Brose group of German companies supplies components to the auto industry.

The car was designed, engineered and built in 2010 by Pininfarina under the direction of Garella. Stoschek is the owner of all rights to the project, including the Stratos brand name now licensed to MAT on a royalty basis.

Garella formerly led Pininfarina’s one-off and limited-production shops and set up his own company to work as a consultant. He says he has received four firm orders for the New Stratos so far and is confident the portfolio soon will reach the 25-unit limit he has set for the lot.

The New Stratos is a radical modification of the Ferrari F430 Scuderia, and each unit will be tuned for power, gear ratios and settings to the customer’s specification. The turbocharged V-8 from Maranello can generate up to 600 hp and will lose the Ferrari logo.

In Geneva, MAT will privately show three specific set-ups: rally-safari for gravel, GT racer for the track and GT for the road.

It has been a long way for the Stoschek project to reach the production stage, with the branding of the product perhaps being the main hurdle to clear. What used to be the Lancia Stratos powered by the Ferrari Dino V-6 of the 1970s is not an up-to-date machine for rally fans and collectors.

The original Lancia Stratos was designed by Marcello Gandini for Bertone, the design studio that produced the 500-unit lot that competed for the world-rally championship title in 1974, 1975 and 1976.