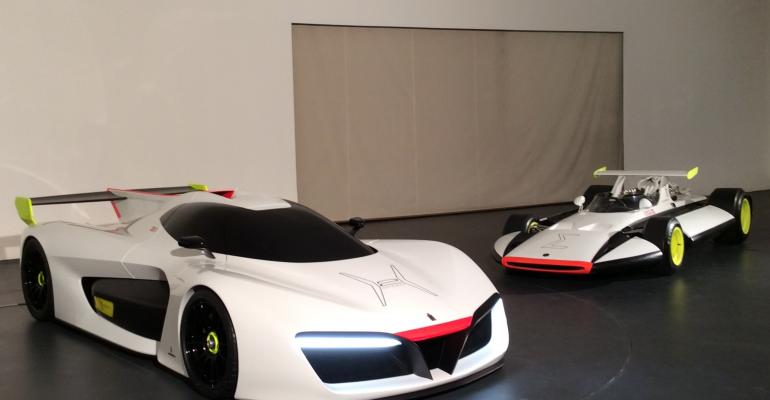 Pininfarina introduces the hydrogen-fuel-cell-powered H2 SPEED Concept, a high-performance GT vehicle designed and engineered for &ldquo;fun on the track.ˮ It&rsquo;s a sports car for buyers for whom environmental awareness and social acceptance is an issue. &nbsp;

GENEVA – The Geneva auto show is the stage for Pininfarinaʼs first press conference after the controlling stake of the Italian design and engineering company is transferred to information-technology giant TechMahindra.

TechMahindra will provide the financial resources and open markets reached by parent Mahindra & Mahindra, the huge Indian conglomerate that is active in numerous industries and commerce. Many companies linked to Mahindra & Mahindra now may benefit from having direct access to Pininfarinaʼs design and engineering capabilities as well as its world-renowned brand name.

To mark the occasion, Pininfarina introduces at the Geneva show the hydrogen-fuel-cell-powered H2 SPEED Concept, a high-performance, 2-seat GT designed and engineered for “fun on the track.“ It’s a sports car for collectors and wealthy enthusiasts for which money is not an issue but environmental awareness and social acceptance certainly is.

Paolo Pininfarina, chairman of the company established by his grandfather in 1930, says the H2 SPEED is not a dream car but a realistic concept of a vehicle the studio wants to make, although in  limited numbers and on individual commissions.

It is similar to the Pininfarina Sergio project launched in 2013 and completed in 2014 upon delivery of the sixth and final unit that was built.

CEO Silvio Angori, accompanying Pininfarina at the press briefing, stresses the concept car symbolizes the speed of change of the automobile as a product and an industry, as well as the speed of change at Pininfarina, which is transitioning from the defensive tactics of recent years to expansive strategies for future development.

The H2 SPEED concept unveiled at Geneva is a fully electric sports car powered by fuel cells that marry the best of todayʼs green technology from Green GT, a designer and producer of clean propulsion systems based in Lausanne, Switzerland, with the carbon-fiber and chassis features of an LMP2 racer. It is driven by two 400V electric motors each delivering 185 kW (250 hp) of power and 442 lb.-ft. (600 Nm) of torque to the rear wheels.

Prototypes tested on main European circuits including Le Castellet in France have reached speeds in excess of 186 mph (300 km/h). Three fuel tanks carrying 2.7 lbs. (6.1 kg) of compressed hydrogen take only three minutes to fill and provide an average 50 minutesʼ worth of energy – enough to complete any GT championship race, says Jean-Francois Weber, managing director and head of R&D at GreenGT.

The concept car’s look is fresh, pure and simple in the best tradition of Pininfarina design. It combines style with premium aerodynamic efficiency and functionality, even though the passenger cabin (not yet revealed publicly) is a nominal 2-seater but is intended for the driver only, as in traditional prototype racers.

Design is credited to the team led by Fabrizio Valentini under the direction of Pininfarina design chief Fabio Filippini.

Pininfarinaʼs designers reference (including Italian and Swiss flags on the car) the studio’s tradition by associating design cues in the H2 SPEED concept to those of the Pininfarina Sigma, the stunning design study that took the 1969 Geneva auto show by storm.

If demand meets with Pininfarinaʼs expectations, 10 units initially would be built with first deliveries taking place in second-half of 2017.  More could be built if FIA promoted a Gran Turismo world championship for EVs.

The Pininfarina H2 SPEED is not expected to go through the standard-type approval process. The studio sees the sports car as a GT for the track, but it will support individual patrons wishing to make it street-legal in their own country. As a zero-emissions vehicle, the task and process might be easier and less expensive than usual.