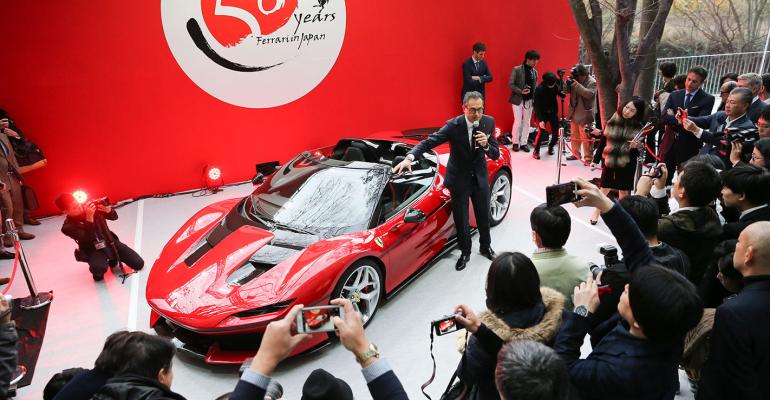 The Italian automaker is building only 10 units of the 2-seat, 690-hp roadster. All have been sold for an estimated $2.5 million and $3 million, with deliveries beginning later this year.

Ferrari celebrates 50 years of success in Japan with the world premiere of the Special Project Ferrari J50 at an event at the New National Art Museum in Tokyo.

The ʼ17 Ferrari J50 is a pure 2-seat roadster designed and type-approved for Japan only.

Its name says it all: “J” means the car it is for Japan only and 50 stands for the number of years since Ferrari entered the Japanese market.

The Italian automaker is building only 10 units of the J50. All have been sold and deliveries are to begin later this year.

The price of each handcrafted unit varies according to its owner’s specifications and commissions, but Ferrari executives estimate the cost of each unit at between $2.5 million and $3 million.

Ferrari says the J50 is its first custom-built model developed specifically for Japan, although Leonardo Fioravanti designed a one-off called SP 1 at the request of Japanese Ferrari collector Junichiro Hiramatsu-san. That car was delivered in 2008.

The J50 roadster differs in many ways from the Ferrari 488 Spider from which it was developed. Each body panel is entirely new and its turbocharged 3.9L V-8 is capable of developing 690 hp.

The J50 roadster is the work of a young generation of designers and it introduces new design elements, such as the distinctive “bridge” linking the rear fenders. Its design language is both avant-garde and reminiscent of the minimalist and nimble simplicity of the early light Ferraris.

“The design approach was led by the desire to create a very low-slung roadster, encapsulating intrinsic Ferrari values of nimbleness and agility,” says Flavio Manzoni, director of Ferrari’s Design Organization.

The J50 roadster also banks on strong dynamics underlined by the raked black line that rises from the low-set nose through intakes behind the doors and the wedged side windows. It also features a low beltline and the air intakes for the rear-mounted engine are gentler and elegantly integrated into the overall sculpture.

The tail section is dominated by the sophisticated interplay of graphic design themes and 3-dimensional elements. The engine is framed by an transparent intricately shaped transparent polycarbonate cover.