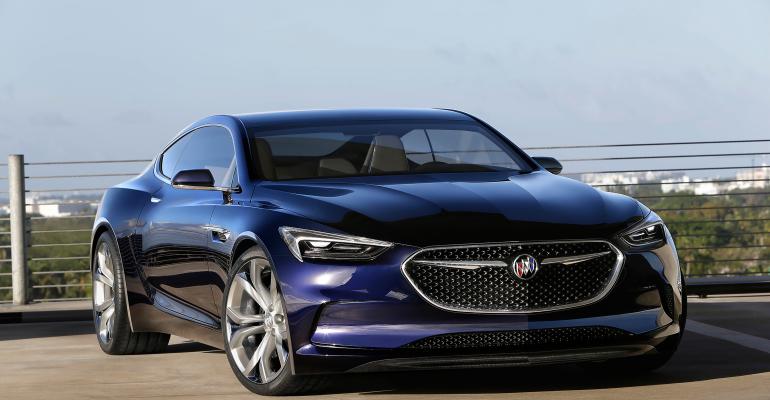 Chief marketer Tony DiSalle dismisses speculation the Avista concept will be converted from a coupe and replace the Regal sedan in the Buick lineup. He says public reception to the Avista wasn&rsquo;t quite enthusiastic enough to earn a production thumbs-up. &nbsp;

OAK BROOK, IL – Consumer reaction to the concept Buick Avista that was displayed at both the Detroit and Chicago auto shows has chief marketer Tony DiSalle tossing out superlatives such as “outstanding,” “phenomenal” and “unreal.”

“The energy around that car and the interest in it at the shows was amazing,” DiSalle, vice president-sales and marketing for Buick, enthuses during a ride-and-drive session for Midwest Automotive Media Assn. members using another vehicle at both shows, the Buick Cascada convertible.

But public reception to the Avista wasn’t enthusiastic enough to prompt Buick brass to give it a production thumbs-up. “It was purely a concept and meant to generate some buzz,” DiSalle says. “No other plans for now.”

There has been speculation the Avista concept would be converted from a coupe to a sedan and possibly replace the Regal sedan in the Buick lineup since the Regal reportedly is in line for a 2017 remake for the ʼ18 model year.

DiSalle defends the Regal as vital to the Buick brand: “Regal is the athlete in our lineup, and in fact Regal owners are our lowest-age buyers at 47 years old. Regal is a premium sedan in the midsize-car segment, and while the growth now is in crossovers, Regal is still very important because the midsize segment is huge and we need a volume car in that segment.

“Speculation about Regal is just that, speculation.”

DiSalle adds the Avista isn’t a styling exercise to show the design theme in Buick’s future, saying that role belonged to the Avinir concept that appeared a year before the Avista.

“Avinir shows the new front-end styling at Buick (that) first shows up in the ʼ17 LaCrosse and will be on all our vehicles over the next two years.”

Asked how Buick, which is strong in sedans, will handle growth in the CUV market, DiSalle explains the brand basically offered a 3-vehicle lineup until a few years ago: the Regal and LaCrosse cars and the Enclave CUV. It now offers three cars (Regal, Lacrosse and Verano), three CUVs (Encore, Envision and Enclave) and a convertible (Cascada), “so we now have seven vehicles in our stable.”

With seven vehicles in the lineup, he says, there are no current plans to add any.

After Cascada, the newest addition to the Buick lineup will be the compact Envision CUV that was on this year’s auto-show circuit and arrives in showrooms this summer. DiSalle says the Envision will be 18 ins. (457 mm) longer than a subcompact Encore and 18 ins. shorter than a midsize Enclave.

While Encore and Enclave offer a choice of front- or all-wheel drive, the Envision initially will be offered only with all-wheel drive. “We’ll talk about a front-wheel-drive version later,” DiSalle says, adding he expects conquests from other brands to account for most Envision sales.

“More than 50% of Encore buyers are new to GM. You can make your own judgement on what that means for Envision,” he says, suggesting it might achieve the same percentage if not higher.

Buick’s small-CUV lineup will get another momentum booster with a refreshed subcompact Encore this fall following its unveiling at the New York auto show that opens next week.

On another topic, DiSalle says Buick’s new ad campaign has been highly effective.

“We now can move on from, ‘Is that a Buick?’ to explain what Buick vehicles have to offer. And new ads are coming. We’ll be in the March Madness basketball tournament to debut some new ads.”

DiSalle says CUVs have been so successful Buick constantly is looking at ways to boost production, noting Encore sales two years ago totaled 30,000 units but more than doubled to 67,000 last year. He declines to say how many Envisions Buick expects to produce.

Thanks to CUVs, the average Buick buyer’s age has fallen to 58 years from 65 only six years ago. “The word at Buick today is momentum, and our momentum is unprecedented right now.”