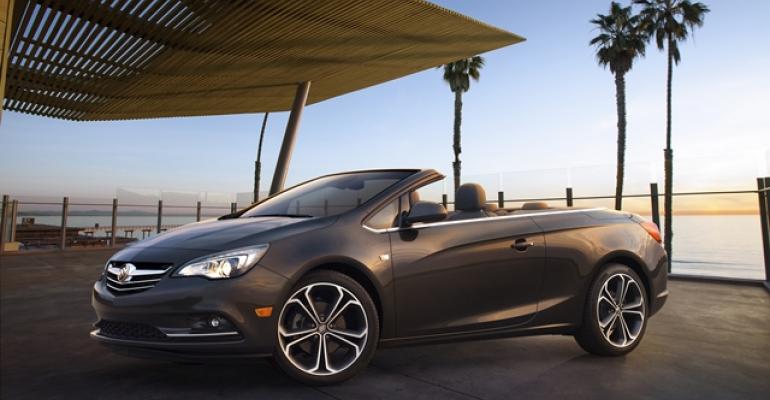 Buick brings back a convertible for the first time in 25 years and it&rsquo;s a good one, based on the Opel Cascada engineered in Europe and powered by a punchy 1.6L turbo I-4.

KEY WEST, FL – For the brand formerly known as “the doctor’s car,” the Buick Cascada may be just what the doctor ordered.

General Motors’ premium marque, once the preferred transportation of the house-calling doctor a half-century ago, hopes to bring fresh air and sunshine to the market with the launch of the ’16 Cascada. The stylish and sporty 4-seat convertible is Buick’s first drop-top since the ’91 Reatta.

Buick topped 1 million sales in China in 2015, but the brand is still a work-in-progress in the U.S., where it battles a gray-haired image to gain relevance with a younger and more diverse buying public.

“This gives us a halo car that will draw attention and draw new people into the brand,” Duncan Aldred, vice president-Buick-GMC, says at the launch of the new model in south Florida. “It epitomizes what we’re after with Buick and acts as a beacon for what the brand represents: sculptural beauty and spirited, efficient performance.”

“We expect Cascada to have a big impact on the brand.”

Based on the Opel Cascada sold since 2013 in Europe, the U.S. version underwent 18 months of development involving some 600 revised parts to become the Buick Cascada. While sheet metal remains largely unchanged, front and rear fascias, including U.S.-spec headlights and taillights and Buick badging, are the most visible changes.

Inside, the car gets knee-bolster airbags, a Buick-badged steering wheel, a revised center console to allow for U.S.-sized cupholders, and cushier seats with a lower hip point to comply with U.S. airbag regulations.

One of the niftiest interior features, developed for the Buick but adopted by the Opel model, is a seatback proximity sensor that limits seat travel to prevent the power front bucket seats from encroaching on the rear occupants’ knees and leg room.

Brought over from the Opel model is a heat-reflective leather material Buick says cuts seat temperature by as much as 30° F when the car sits in hot sun. Spring and pyrotechnically deployed roll bars behind the rear seats provide rollover protection.

Cargo room always is cramped in convertibles, especially with the multi-layered top tucked beneath a clean tonneau cover as in the Cascada, leaving just 9.8 cu.-ft. (277 L) of space. There’s 13.4 cu.-ft. (379 L) with the top up. But the Buick makes up for this shortcoming with both a trunk pass-through for long items and a 50-50 split-folding rear seatback to allow for more gear when extra passengers aren’t along for the ride.

The best news is under the hood, where Buick opted for the most-potent powerplant in the Opel Cascada portfolio for its U.S. model, the 1.6L turbocharged I-4 that features direct-injection and variable valve timing.

The same 200-hp and 207-lb.-ft. (280-Nm) engine powers the hot Opel Astra GTC hatch and the Opel Zafira Tourer MPV in Europe. At more than 100 hp/L, Buick says it is one of the most power-dense in the small-car segment. The engine includes an overboost function that punches torque to 221 lb.-ft. (300 Nm) for short bursts.

This is our first exposure to GM’s 1.6L turbo – the Cascada leads the engine’s U.S. deployment – and we’re happy to report it stacks up well against other small-displacement 4-cyl. turbos in terms of refinement and responsiveness.

Quietness, a hallmark of Buick nowadays, can be hard to come by in a drop-top, but the car’s thermally and acoustically baffled fabric roof keeps engine, road and wind noise to a pleasantly low level.

Top down, wind buffeting is minimal and allows for easy conversation with a passenger even at speed. Raise the four windows and the passenger compartment becomes an open-air cocoon.

When recalibrating a European-developed model for the U.S. market, engineers typically do a lot of suspension softening and powertrain de-tuning intended to make the car more palatable to America’s boulevard and freeway tastes. Not so with the Cascada, says Michael O’Leary, lead development engineer.

Front suspension is Opel’s patented HiPer Strut while the rear is Watts Z-link, used to save space and weight compared with an independent rear setup.

Chassis tuning initially revolved around setting up the car for its standard 20-in. all-season tires. Springs, shocks, steering and electronics adjustments make the car more compliant over rough roads, but also reduces pitch over bumps and roll in corners, O’Leary says.

We have to take O’Leary’s word for it – long causeways and straight-line roads en route from Key West, FL, to Miami, don’t lend themselves to dynamic chassis evaluation. The rack-mounted electric power steering does feel quite centered, with very little need for correction and near-zero space off-center before direction changes.

Buick is painting in a very small white space with the Cascada. The 4-seat convertible segment was recently vacated by two competitors, the Volkswagen Eos and the Lexus IS250C. Convertibles in total, including 2-seat roadsters, make up just 2.1% of the U.S. market, or 161,000 cars out of 7.6 million cars sold in 2015, WardsAuto data shows.

At about 10,000 sales per year, the Cascada is a low-volume car. Aldred says its larger calling is to create a halo until other new models such as the flagship LaCrosse and the compact CUV Envision arrive later this year.