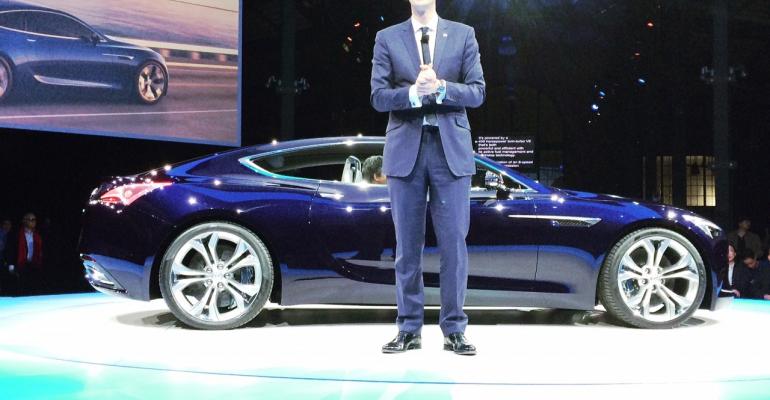 &ldquo;The brand is in a position now where it can afford this kind of really strong statement from a design and styling perspective,&rdquo; GM President Dan Ammann says.

DETROIT – General Motors and its Buick brand get the 2016 North American International Auto Show off to a rousing start, surprising the industry for the second consecutive year with a head-turning concept car.

The automaker shows here the Avista, a low-slung, show-stopper of a coupe its executives stop short of committing to building but say it reflects the renewed strength of the Buick brand in the U.S. Last year on the eve of the Detroit show, Buick surprised with the Avenir large car that saw cues go into production on the soon-to-be-launched ’17 Buick LaCrosse.

“The brand is in a position now where it can afford this kind of really strong statement from a design and styling perspective about where we see the future of the brand going,” GM President Dan Ammann says of the Avista, which followed the introduction of the Envision small CUV on stage.

Buick nearly saw the chopping block six years ago as GM shed brands as part of its U.S. bankruptcy. But Buick stood out for its strength in China and the popularity of its Enclave large CUV in America. Now riding three straight years of record global sales, the brand is adding products to its lineup in both countries including in the U.S. the redesigned LaCrosse, Cascada convertible and Envision.

“We couldn’t be happier with the progress the Buick team has made over the last few years, repositioning the brand and growing it in both China and here North America,” Ammann says. “It’s the right time to explore this.

“It’s a big deal,” he adds. “And to be in a position, not just from a volume point of view but also brand momentum and brand statistics going in the right direction and overtaking competitors, it’s a great time to do this (concept).”

The 4-seat Avista boasts a 400-hp , twin-turbo V-6, rear-wheel-drive and a driver-centric cockpit. Muscular haunches swell over the rear wheels and the absence of a B-pillar give the car a flowing profile.

Ammann does not hint about the future of the Avista as a production model, reminding journalists, “It is a concept car at this stage.” But he says on top of the Envision it illustrates GM’s plan to put a Buick vehicles in a variety of segments.

The Envision has been on sale in China for more than a year, drawing 140,000 buyers in 2015. It will be built there, too, making it one of the first Chinese-built cars sold in the U.S. when it arrives at dealers later this year. The Volvo S60 Inscription is on sale now.

Ammann has no reservations about how U.S. buyers might perceive the car.

“It’s going to be very successful here,” he says. “We’ve got a lot of customers we’re sure will be lining up when it’s available.”