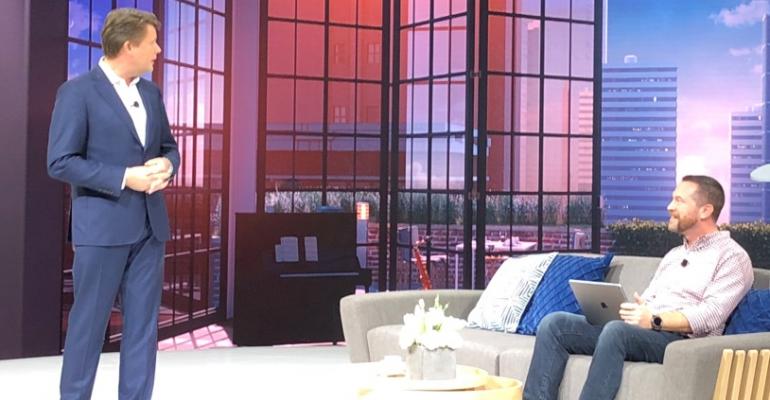 For a flat monthly fee, consumers can get a Volvo XC40 for two years and coverage for insurance, maintenance, potential repairs and wear and tear. A concierge service is thrown in.

Until Volvo Cars executives Haken Samuelsson and Anders Gustafsson come out one after the other, the only person onstage is a casually dressed guy on a couch in a living-room setting. He’s holding an iPad and looking out of place at the Los Angeles auto show.

Then to get things started, Volvo Cars President and CEO Samuelsson enters stage right and talks about the Swedish automaker’s investment in the U.S., from a design center in California to an assembly plant in South Carolina.

“It’s fair for us to call the U.S. an additional home market,” he says.

He also talks about the upcoming XC40, Volvo’s first-ever premium compact SUV that hits the market in March. But Samuelsson makes no mention of the quiet guy on the couch next to him.

It isn’t until Gustafsson, senior vice president-Americas, comes out that the mystery man is identified. He is Volvo customer Heith Rogers of Los Angeles, who during previous online shopping (offstage) has decided the XC40 is for him.

At the press conference, Rogers proceeds to use his computer tablet to become the first person to order the vehicle through the automaker’s new subscription program, Care by Volvo.

Under the unique program, a consumer can acquire an XC40 for two years by paying a monthly flat fee. That also covers insurance (through Liberty Mutual), all maintenance, potential repairs and wear and tear. A concierge service is thrown in.

“And there’s no down payment,” Gustafsson notes. “The only thing that’s not covered is gas.”

Other automakers have their own versions of subscription services. For example, Lincoln announced at the LA auto show it is piloting a program that lets consumers swap out different cars on a monthly basis.

But Gustafsson says Care by Volvo is different, in part because “it is not a test program and it is offered across the nation.”

The length of the Care by Volvo subscription encourages customers to get new Volvos regularly. “After the 24 months is up, they hopefully order a new one,” Gustafsson says.

He touts the flat-fee part of it, but some skeptics say that seems to defy the fact that insurance rates and claims typically differ by region and by driver in the U.S.

Carroll Lachnit, Edmunds senior consumer advice editor, says Volvo’s and Lincoln’s new subscription-service offerings “will likely be enticing for shoppers, but it’s a good idea to do some research before you sign up.”

Lachnit calls it “a different experience from leasing or buying” and “from a cost perspective, consumers may find themselves paying a premium for convenience.”

Attending the Volvo press conference is Victor Doolan, who once ran Volvo’s U.S. unit when Ford owned the brand.

He likes the idea of Care by Volvo and predicts it will serve Volvo well. “But you will still find people who want their own insurance,” he tells WardsAuto. “That’s life.”

On the sidelines, Samuelsson says Volvo eventually may extend the subscription service beyond the XC40 to other vehicles in the lineup.

Volvo displays an XC40 model at the L.A. show, although it never takes the stage. It occupies a raised display-case box nearby.