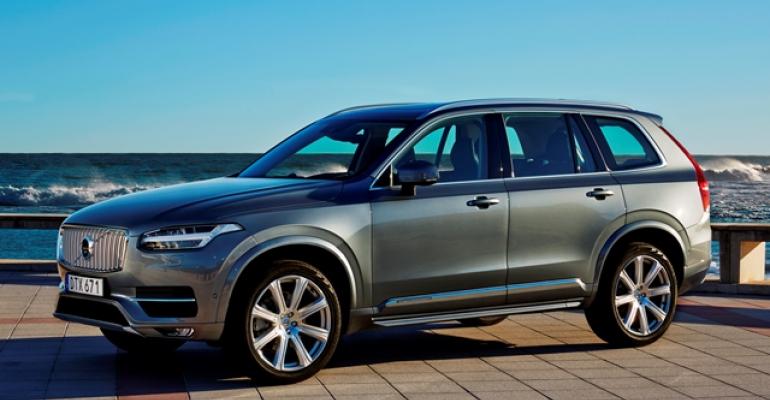 BARCELONA – It’s been more than four years since Volvo launched an all-new vehicle, the second-generation S60 sedan. Certain models have gotten facelifts since then. For instance, the XC60 CUV, introduced in 2008, was refreshed two years ago. Powertrains have been upgraded, too.

But it’s fair to say much of the Swedish-born portfolio had languished in the latter years of Ford ownership and as the sale to China’s Geely Automobile was completed in 2010.

The dust has settled, and Volvo, under Geely ownership, is launching a serious product assault that begins with the second-generation XC90 CUV, a sizable ute that has not been “all-new” since the first generation launched in 2002.

In its best year, 2004, the XC90 trailed only the Lexus RX in WardsAuto’s Middle Luxury CUV segment, achieving 39,183 deliveries. Since then, luxury rivals have pummeled Volvo in this lucrative high-growth segment. Last year, Volvo sold a mere 3,952 XC90s.

That’s about to change as the new model, although long overdue, arrives with a brilliantly designed interior, two efficient powertrains, an intuitive human-machine interface and enough exterior styling tweaks to attract luxury-leaning shoppers.

There are many aspects of the ’16 XC90 to admire but none like the cabin, which pays homage to Swedish culture with clean Scandinavian design bolstered by the notion of understated confidence and active lifestyles rooted in a love of the outdoors.

This connection to nature is evident in the rich metallic trim, deep-grained wood and the crafting of the gear shifter out of Swedish Orrefors crystal, which is optional.

Behind the steering wheel, the driver feels at peace as the interior delivers the proper balance of soft armrests and trim while adjoining surfaces are metallic or wood. Hard plastics are used sparingly and to good effect.

Immediately noticed is the uncluttered layout of the instrument panel, which consists of a reconfigurable digital gauge cluster and a center stack dominated by a vertically oriented 9-in. (23-cm) touchscreen that functions like an iPad.

Be prepared to spend 20 minutes cycling through pages of vehicle data and comfort options. Want to set your XC90 to park itself? Select a display theme and color? Choose powertrain characteristics, steering feel and braking response? Set the temperature of the heated passenger seat when starting the vehicle remotely? Determine how quickly the City Safety collision-avoidance system sounds an alert? Do it all, and so much more, with swipes and clicks.

It all may feel overwhelming at first. But Volvo devoted huge resources to engineering this world-class human-machine interface, and the driver begins to understand it quickly.

Integrating most of the vehicle functions within the central display freed up designers from fussing with placement of switches and knobs. The result is a mere six buttons on the center stack for defrost (front and rear), hazard lights, glovebox release and audio track selection (forward and back).

Those switches are arrayed in one horizontal row, on either side of a large knob for controlling volume and song selection. The steering wheel has more switches on it than the instrument panel. Distractions are few.

The rest of the interior is nice, too. A massive panoramic roof lets in light, and the second-row seats are comfortable and spacious. The third row has seating for two, which is not particularly comfortable for a moderately sized adult. The sleek rearview mirror without any framing is gorgeous.

Fit-and-finish on the pre-production models evaluated here is generally good, although pieces of interior plastic trim on the D-pillar near the liftgate consistently reveal an unsightly gap.

The XC90 arrives in the U.S. with two gasoline powertrains paired with the same 8-speed automatic transmission. A 2.0L diesel will be offered in Europe.

The base “T6” is a 316-hp 2.0L 4-cyl. employing both turbocharging and supercharging. A version of this engine rated at 302 hp performed well in Ward’s 10 Best Engines testing last fall in the S60 sedan.

When Volvo boldly announced several years ago it was eliminating 6- and 8-cyl. engines from its lineup, skeptics doubted the brand’s largest vehicle, the XC90, could make do with only four cylinders of motivation.

But the critics can stand down: The T6 gets the job done, accelerating briskly from a standstill and while passing on the highway, without ever sounding or feeling overtaxed.

The “T8” powertrain is a plug-in hybrid that connects the T6 engine to a large motor in the rear and a 34 kW crankshaft-mounted starter generator that provides an additional 111 lb.-ft. (150 Nm) of torque when needed.

Volvo claims this ultra-low-emissions powertrain produces about 400 hp and 472 lb.-ft. (640 Nm) of torque while achieving an astonishing 112 mpg (2.1 L/100 km) in the European drive cycle, clearly spending most of its time in electric mode. The fuel economy according to the U.S. driving cycle is 59 mpg-equivalent (3.9 L/100 km).

Beyond 25 miles (40 km), the electric mode will be depleted, at which point the XC90 will run primarily on gasoline. Like other automakers, Volvo is convinced an electric range of 25 miles is enough for many daily commutes, drastically reducing fuel consumption.

The 9.2 kWh lithium-ion battery pack positioned in the transmission tunnel can be charged in 2.5 hours with a 220V Level II charger or about six hours with a standard 110V wall socket.

A metallic rotary scroll dial in the center console lets the driver choose from five modes: Hybrid, Pure Electric, Power, AWD and Save. If the battery is charged, this last mode allows the driver to “freeze” the battery level for later use in Pure Electric mode, perhaps when arriving in a city center that limits the use of gasoline engines.

If the battery is low, the driver can use the combustion engine to charge the battery for later use in electric mode.

Dealers will start getting retailer demos of the XC90 T6 in May. First editions will be delivered in June and vehicles will go on sale in July, offered in three trim levels: the volume-oriented Momentum (starting at $48,900), upscale Inscription ($54,500) and the sporty R-Design ($52,900), plus $995 destination charges.

But Volvo built its brand on safety, starting with the 1959 pioneering of the now-standard 3-point seatbelt, so most safety features are standard, including Volvo On-Call vehicle tracking, City Safety collision avoidance (for pedestrians and cyclists, too), run-off road protection (to prevent lower back injuries), lane-departure warning and road sign information.

The XC90 is manufactured in Gothenburg as part of Volvo’s Scalable Platform Architecture, which will spawn other new vehicles in the future, including the next-generation S80 sedan.

Sales of the previous-generation XC90 finished 2014 near the bottom of its segment, being outsold at least 10-to-1 by the Acura RDX, Audi Q5, BMW X5, Cadillac SRX, Lexus RX and Mercedes M-Class.

With Thor’s Hammer, Volvo’s new entry in this critical market has a fighting chance at meeting the ambitious goal of 28,000 deliveries annually in the U.S.