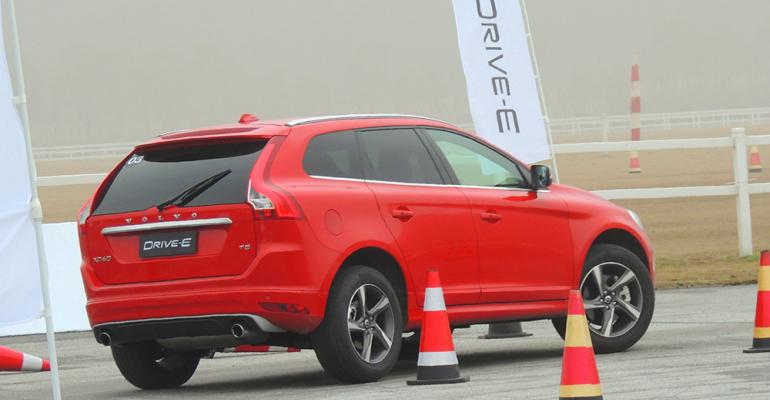 The Swedish automaker wanted to develop its own engines but had to wait until the 2010 sale to Geely was complete. Today, the Drive-E launch of two new gasoline engines for the U.S. is under way.

SHANGHAI – Volvo Car engineers began working quietly on a family of all-new engines in 2007, but a full-blown research project didn’t get under way until the Swedish automaker’s 2010 sale to China’s Geely Automobile.

While Ford was still in control prior to 2010, Volvo powertrain executives had spent several months building a case for engines unique to its brand, instead of those that had been designed and built by Ford.

“We turned that business case around and said, ‘What if we did our own engines?’ The business case was so obvious,” he says, referring also to benefits for Ford. “We also were disturbing Ford’s manufacturing processes” by demanding certain features for engines headed to Volvo.

Without knowing Ford was in advanced talks with a suitor for Volvo, Crabb and his team took the matter straight to Ford’s top decision maker.

“We actually went to (CEO) Alan Mulally eventually and said the business case shows Volvo should develop its own engines,” Crabb recalls. “At that point, he said ‘I agree, but by the way there is a sale process going on. Can you go talk to Geely?’

“That was, as you can imagine, quite an adventure going to Mulally and then the next day going to Geely.” Crabb says the internal engine program ultimately became an important element of the sale process.

Four years later, the strategy is bearing fruit as Geely investments have enabled Volvo to design a family of “Drive-E” 4-cyl. engines at its technical center in Gothenburg.

The first two 2.0L gasoline powerplants, as part of the new modular Volvo Engine Architecture, will arrive this year in the U.S. in the turbocharged 240-hp V60 T5 wagon and the 302-hp XC60 T6 CUV, which employs both turbocharging and supercharging.

Both engines, using 8-speed automatic transmissions, were part of a test drive here for 150 Chinese journalists to evaluate the new engines. Reviews were favorable.

A Drive-E diesel is available in Europe but is not planned for the U.S. at this time.

Ultimately, the VEA plan calls for four gasoline and four diesel engines that share many common components and can be manufactured on a single assembly line in Skövde, Sweden.

Volvo has used piezo-based fuel injectors in the past but switched to less-expensive solenoid units. That approach carries over to the new VEA family.

The new gasoline and diesel engines share cylinder pitch, as well as bore and stroke, and both use high-pressure die-cast aluminum crank cases and bedplates with cast-in iron liners.

The blocks would be identical except for the higher deck height and more robust liner strength for the diesel. Mazda also is in the process of launching new diesel and gasoline engines from the same assembly line in Japan.

The compression ratios are 10.3:1 for the high-output T6 engine and 10.8:1 for the T5, while the diesel comes in at 15.8:1 and will use urea-based selective catalytic reduction to treat oxides of nitrogen emissions.

Volvo classifies both the diesel and gasoline engines as residing in two clusters – one for high performance and the other for outstanding fuel economy.

Given the stringent demands of pending fuel-economy regulations around the world, Crabb says the VEA powertrain family will be extended to include a 3-cyl. engine. He sees no reason why a luxury car cannot get all the power and refinement it needs from such a small powerplant.

Displacement throughout the engine family is not expected to exceed 2.0L. “We know we can get more power out of these engines by boosting,” Crabb says. “The question is, can we go smaller? We’ve already announced we will do that, but we haven’t said when.”

Electrification of these new powertrains will come in the future, including an XC90 CUV plug-in hybrid slated for the U.S., Crabb has said.

Investments to date, including gearbox and software development, amount to about $600 million, split equally between upgrades at the Skövde engine plant, engineering the powertrains and supporting supplier engineering and tooling, Crabb says.

Integration Where It Makes Sense

In the meantime, Volvo is stepping up its presence in China. In late 2013, the automaker opened plants in Chengdu (to manufacture the long-wheelbase S60), Zhangjiakou (to build outgoing 5-cyl. and new T5 4-cyl. engines) and Daqing (to assemble the XC90 from knocked-down kits).

And Geely hopes to benefit from Volvo’s vast experience in producing luxury cars. In recent years, Geely hired about a dozen engineers from Hyundai/Kia in South Korea in an effort to adopt modern assembly techniques, Binyi says.

So far, the strategy is working. “It’s helping to transform the Geely plants in China,” he says.

However, in an effort to protect intellectual property for each, Volvo and Geely are operating as two individual companies with separate management, daily operations, processes and locations.

In China, Volvo is considered a foreign automaker based in Sweden, even though Geely owns it 100%. “Geely is letting Volvo be Volvo,” Binyi says. “Both sides are aware of the risk of combining the brands.”

As for powertrain or component sharing between the two companies, Crabb says it’s too early to discuss. “We are starting to talk with Geely about some possible sharing, but it’s still a long way away,” he says.

Crabb thinks back to the years under Ford ownership as a time when Volvo was constrained in terms of powertrain development. “Geely was anxious not to go there again,” he says.

Volvo will continue to retain much of its vehicle architecture development in Gothenburg while continuing to build engineering expertise in Shanghai, Crabb says.

“We’ve brought a lot of senior people over from Sweden and recruited heavily in China,” he says. “And we’ve brought some Chinese people back from Germany and the U.S., or wherever, to help to integrate between Swedish and Chinese natives. That team has been in place now for three years.”