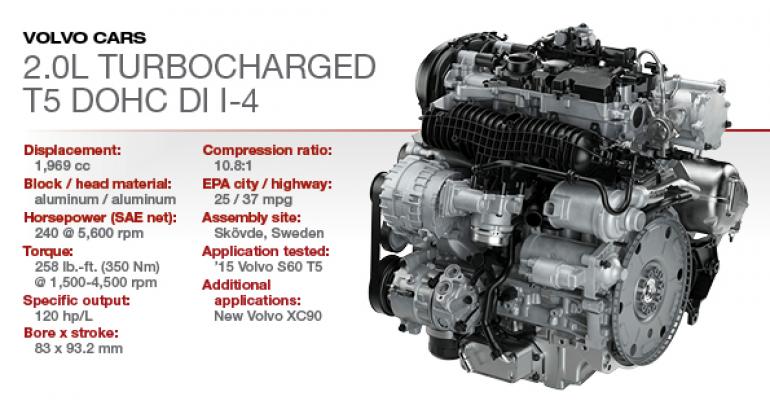 The premium market is flooded with good 4-cyl. turbocharged engines, but Volvo&rsquo;s new T5 2.0L in the S60 sets a high bar for all.

Volvo’s decision several years ago to rid its product stable of any engine with more than four combustion chambers seems a lot less risky while driving the Volvo S60 with either available all-new 2.0L 4-cyl. engine.

There’s the 302-hp “T6” engine that draws inspiration from both a turbocharger and supercharger and the 240-hp “T5” I-4 that uses only a turbocharger. Both engines are completely competent and well suited for a sporty luxury sedan.

But Ward’s 10 Best Engines judges are paying more attention to real-world fuel economy, and that’s why the T5 makes our list. Routinely topping 30 mpg (7.8 L/100 km), Volvo’s T5 gives up little to its high-output sibling by way of performance while running smoothly at just about any engine speed.

Stack the T5 against the BMW 3-Series sedan, with its benchmark 2.0L turbo-4, and the Volvo powerplant fares extremely well in all measurables. On the fuel-economy front, the EPA says the T5 tops the Bimmer in both city and highway driving, rated at 25/37 mpg (9.4-6.3 L/100 km).

For additional context, a Cadillac ATS with a 2.0L turbo-4 driven about the same time as the T5 S60 averaged a mere 22.6 mpg (10.3 L/100 km) at the end of the loan. Aiding the S60 in fuel efficiency is an 8-speed automatic transmission and stop/start system.

Volvo engineers started working on this new modular engine architecture as far back as 2007 under Ford ownership, but it wasn’t until 2010 when China’s Geely Automobile bought the brand and devoted capital and resources to a full-blown development program.

The Volvo Engine Architecture plan calls for four gasoline and four diesel engines that share many common components and can be manufactured on a single assembly line in Skövde, Sweden. No word yet on a diesel coming to the U.S.

Volvo has used piezo-based fuel injectors in the past but switched to less-expensive solenoid units. That approach carries over to the new VEA family.

Next fall, we hope to test the newly amped-up 400-hp version of the T6 2.0L in the XC90 plug-in hybrid, if it will fit under the price cap. A 3-cyl. engine also will join the family, a Volvo executive has said, but it is not clear if it will come to the U.S.

Marketed as “Drive-E,” the T5 was greeted enthusiastically by WardsAuto editors. “Packs a good punch. Loads of torque, early and often,” writes James Amend on his score sheet.

“Smooth all the way through the gears. It’s superior to the turbocharged/supercharged T6. Plenty of hp/torque, and 32 mpg is impressive,” writes Jim Irwin in assessing the engine.

With silky Swedish gems like the T5, Volvo has the potential to expand beyond its near-luxury reputation.

The premium market is flooded with good 4-cyl. turbocharged engines, but Volvo’s new T5 2.0L in the S60 sets a high bar for all.