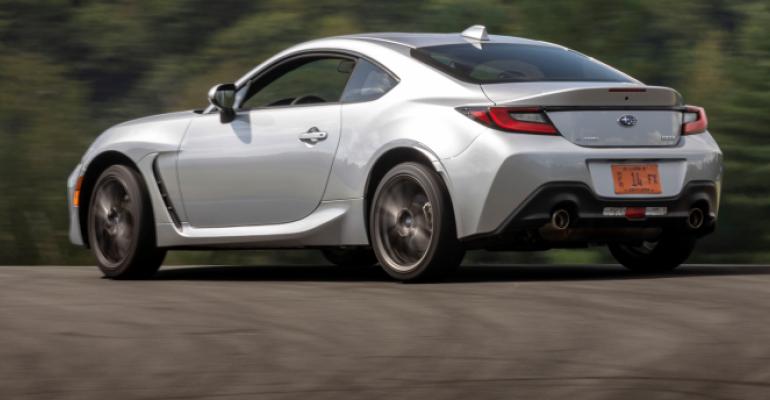 For the new-generation GR 86 and BRZ, Toyota handled the lead planning and design, while Subaru took charge of the engineering and production efforts. Styling aside, Subaru admits the differences between the two vehicles are not major, but they do exist.

Sometimes, in popular music, two artists will release their own version of the same song about the same time and the fans can pick their favorite.

This was common in pop and country circles half a century ago, but it hasn't gone away. Alicia Keys and Jay-Z both released versions of "Empire State of Mind" about a decade ago. The Highwomen and Tanya Tucker both put out "Wheels of Laredo" last year.

And Toyota and Subaru released the GR 86 and the BRZ this year.

OK, the last example isn’t about music, but it helps illustrate that it’s difficult to talk about the new Subaru BRZ without mentioning Toyota’s GR 86 as well. As with the first-gen models that launched a decade ago (as the Scion FR-S, in Toyota’s case), the two sports cars grew out of a collaboration between the automakers.

For the new generation, Toyota handled the lead planning and design, while Subaru took charge of the engineering and production efforts. Styling aside, Subaru admits the differences between the two vehicles are not major, but they do exist.

Stylistically, the 86 and BRZ both look like they spent just the right amount of time in a wind tunnel. I prefer the BRZ’s front end, especially the way the headlights and lower front side openings work together to create a forward-pointing arrow that emphasizes the grille’s elegant opening. This also gives the BRZ the look of something that wants to jump forward at any moment, a fitting design choice.

The 2+2 interior (pictured below) is simple and practical, but not cheap. The few buttons are limited to the ones a driver needs to enhance enjoyment of the ride, like selecting track mode or HVAC controls. The 7-in. (18-cm) digital dashboard can show a tachometer or a color, linear RPM graph in track mode. Apple CarPlay and Android Auto are both standard, and Subaru’s EyeSight safety system is standard with the automatic transmission.

Subaru specifically called out the work it did to make the front seats work better for a small sports car. For one thing, they have been placed 2.8 ins. (7 mm) closer together, a way to bring driver and passenger that much closer to the vehicle's center. This also allows the sides of the roof to be brought inward a smidge for improved yaw feeling. All these small changes improve the experience from behind the wheel, but you won’t be thinking much about them directly. Invisible improvements are simply good engineering. 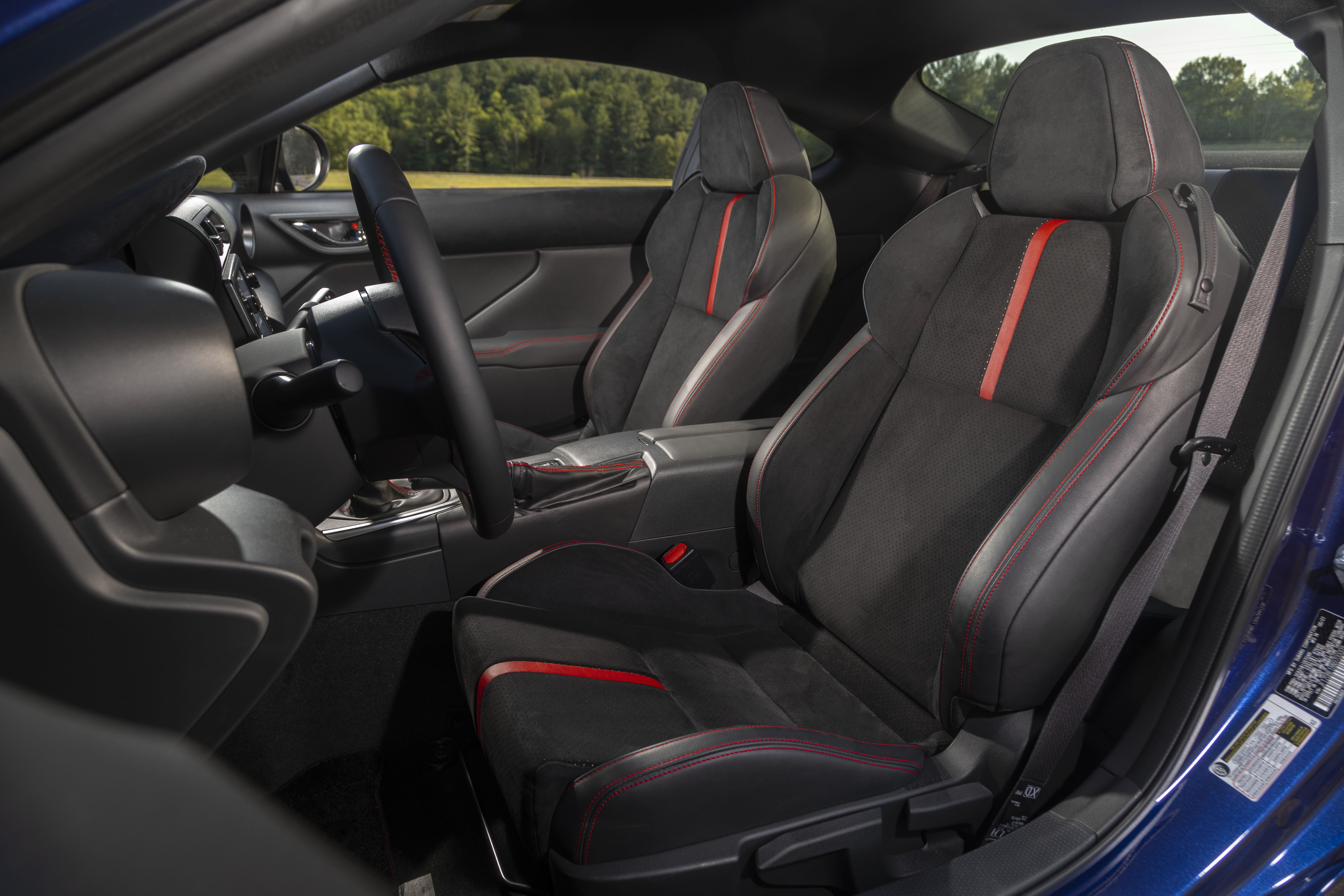 Both the 86 and the BRZ models have been tuned to take advantage of the characteristics of the new engine, a 2.4L naturally aspirated boxer that produces 228 hp and 184 lb.-ft. of torque (309 Nm), as well as front and rear damper settings and electric power steering.

After that, the two companies made their own decisions on things like the front knuckles (aluminum on the BRZ, steel on the 86) and rear stabilizer bar (1 mm shorter on the BRZ, where it is also mounted directly onto the body instead of to the subframe like on the 86).

The BRZ also has a 7% higher spring rate in front and 11% lower rear spring rate compared to the 86. As you might imagine, these changes do not add up to dramatic differences when you’re sitting behind the wheel (You can read our review of the GR 86 here).

Like the 86, the BRZ encourages you to have fun while driving. I haven’t driven the first-generation BRZ, but if the changes are in any way similar to what Toyota did between the two generations of the 86, anyone who liked the earlier BRZ will love this new one. 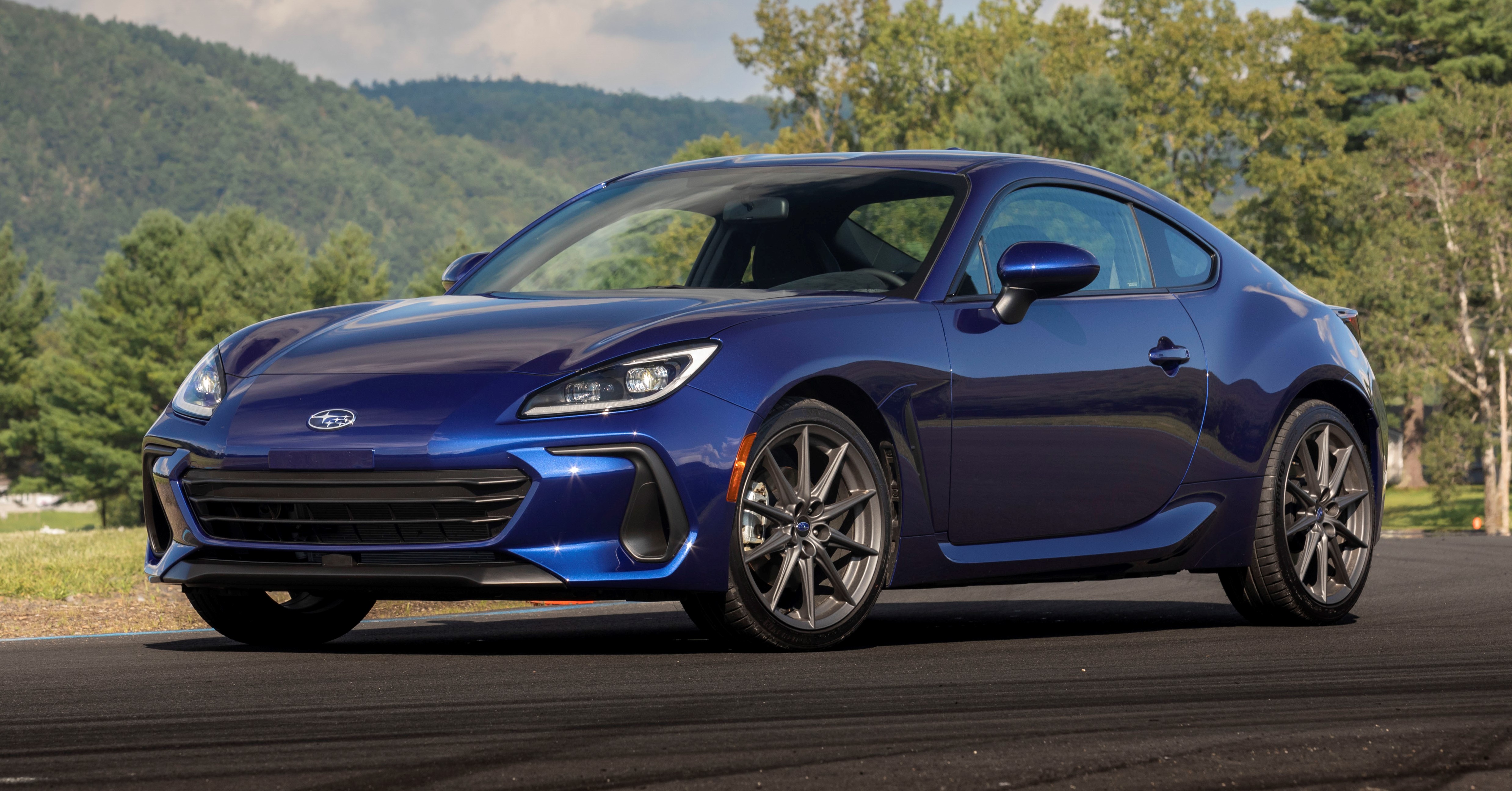 The car simply wants to be enjoyed, and the work Subaru did to increase the naturally aspirated engine’s torque at lower RPM means you can do entire autocross laps in either second or third gear if you want. You probably won’t, though, since shifting the BRZ is easy-breezy in both the 6-speed manual and optional automatic version.

I had more fun on the speed portion of the test drive than the autocross, but not everyone driving during my test day at Lime Rock in Connecticut agreed.

The good news is that in a car as fun as the BRZ, there are no wrong answers. Getting the little sportster up to 108 mph (174 km/h) on the straightaway and then flowing through the track’s excellent curves was simply a delight.

This brings up another example of Subaru’s attention to detail for this practical performance car: The Tire Pressure Monitoring System (TPMS) can save two sets of wheels, so that you can swap tires for track use without needing to change the tires on the original wheels. You could also use this when swapping out seasonal tires, of course. 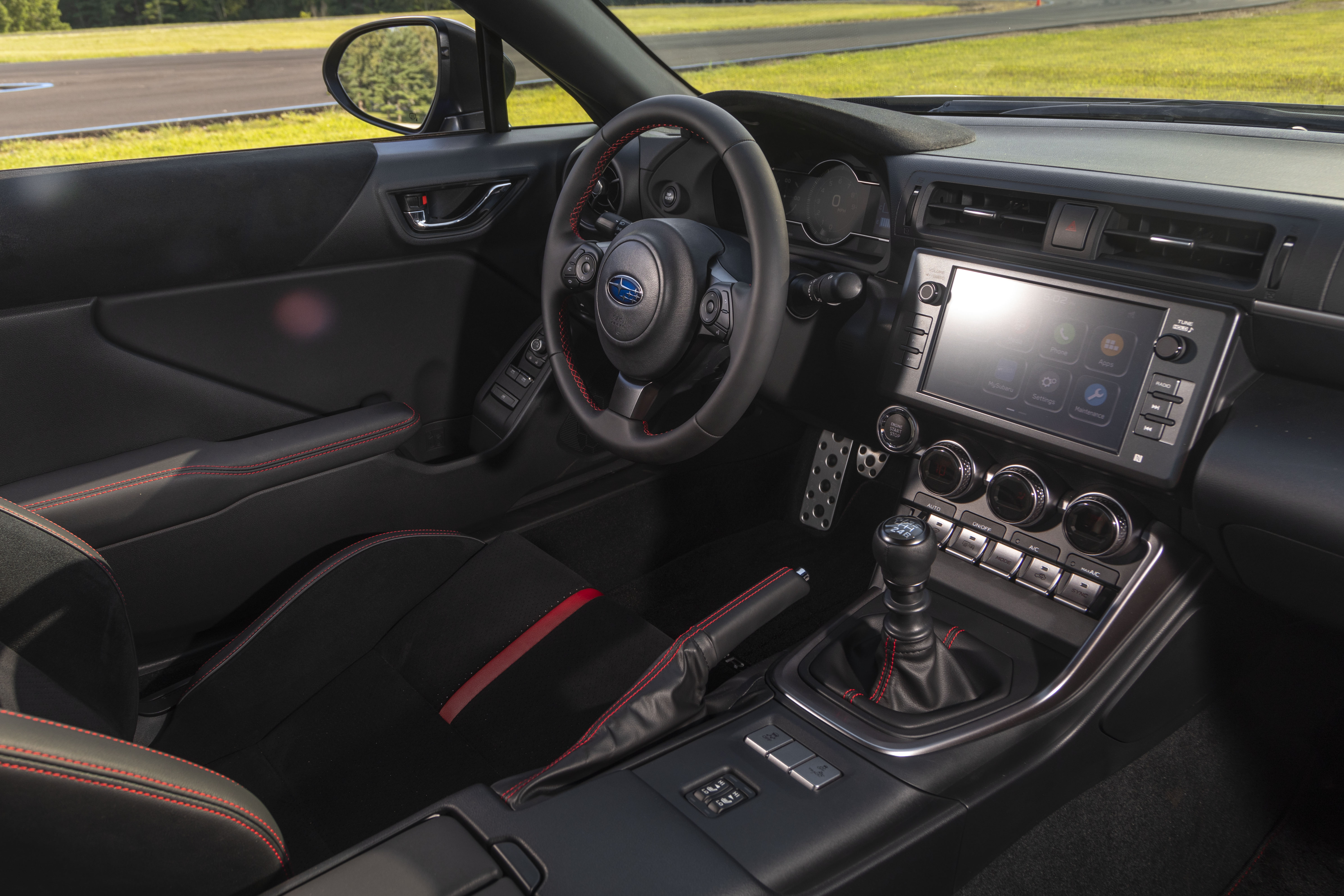 Darting through forests and small towns on public roads in upstate New York, it was possible to notice details that aren’t as important on the track. Like how the unit above the rearview mirror that contains emergency contact electronics and other components had a loud rattle.

But that didn’t take away from the fact that the BRZ remains absolutely fun even when operating at or under the speed limit. The characteristics that make it perform better on the track mean it’s more enjoyable to take on an errand, as well.

Just like making a decision on an expensive jukebox, buyers who are debating between the Toybaru twins will make the right choice, whichever they choose. 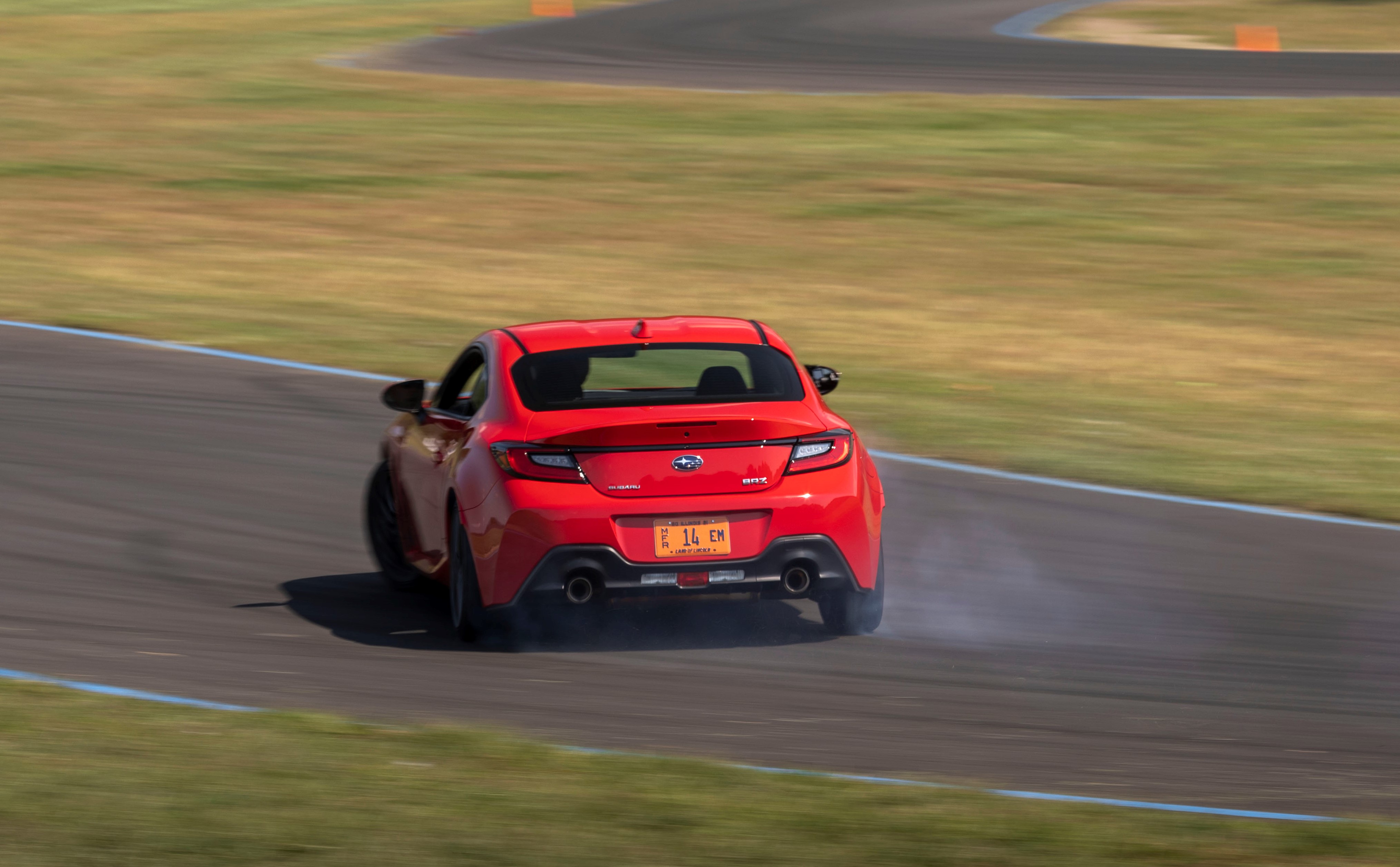 Pushing BRZ to the limit in corner.