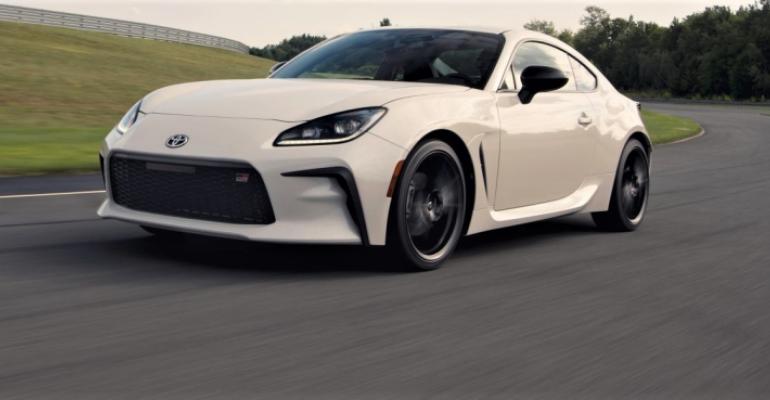 It’s safe to say the ’22 GR 86 delivers what it promised: a more fun Toyota that won’t break the bank.

Jumping from the driver’s seat in the first-generation Toyota 86 into the new, second-generation 2022 Toyota GR 86 is like getting into an entirely different car. Similar exterior styling reminds you that Toyota isn’t reinventing the racing-inspired coupe here, but when in motion, it’s tough to think of them as wearing the same nameplate.

The main reason for this difference lies in the incoming vehicle’s GR badge, which the outgoing 86 did not wear. GR, of course, stands for Gazoo Racing, and Toyota’s mission with the new GR 86 was to put some of its track-tested racing knowledge into a rear-wheel-drive 2+2-seater that will start under $30,000.

Buyers are about to have choices in this general segment. Toyota had help on the GR 86 from Subaru, which is about to release a new BRZ that is mechanically similar to the GR 86, and Nissan just unveiled a new Z that will launch in the spring of 2022 for about $40,000.

With a stiffer chassis, the new GR 86 is unquestionably more refined than the current 86, with less noise and vibration infiltrating the cabin from the road, which means you’re more able to sense what the car is asking for in terms of speed and steering.

This is one example of the solid communication between car and driver, and while the GR 86 asks you to have fun on the track, it is not all that demanding. In fact, the word that comes to mind when driving the GR 86 is forgiving.

You can be in the less-than-ideal gear and still have the power to get through a curve, for example. You can also leave the new model in third gear longer, which makes going about 30-50 mph (48-81 km) on the track that much easier. Having driven both of the new GR 86 trims for track purposes, you will certainly want the Premium trim, with its Michelin Pilot Sport 4 215/40R18 tires, or supply your own.

The GR 86 also patiently teaches you when to shift the 6-speed manual transmission (a 6-speed automatic version with paddle shifters is also available).

When you have the right setting turned on, a small white arrow appears at the top of the driver display when you’re at the upper end of the band for a particular gear, telling you to shift. You can also set your own RPM limits to have the car alert you with an orange light and a beep to remind you to shift.

The GR 86 offers Normal, Sport and Track driving modes to easily adjust how the car behaves depending on the situation. 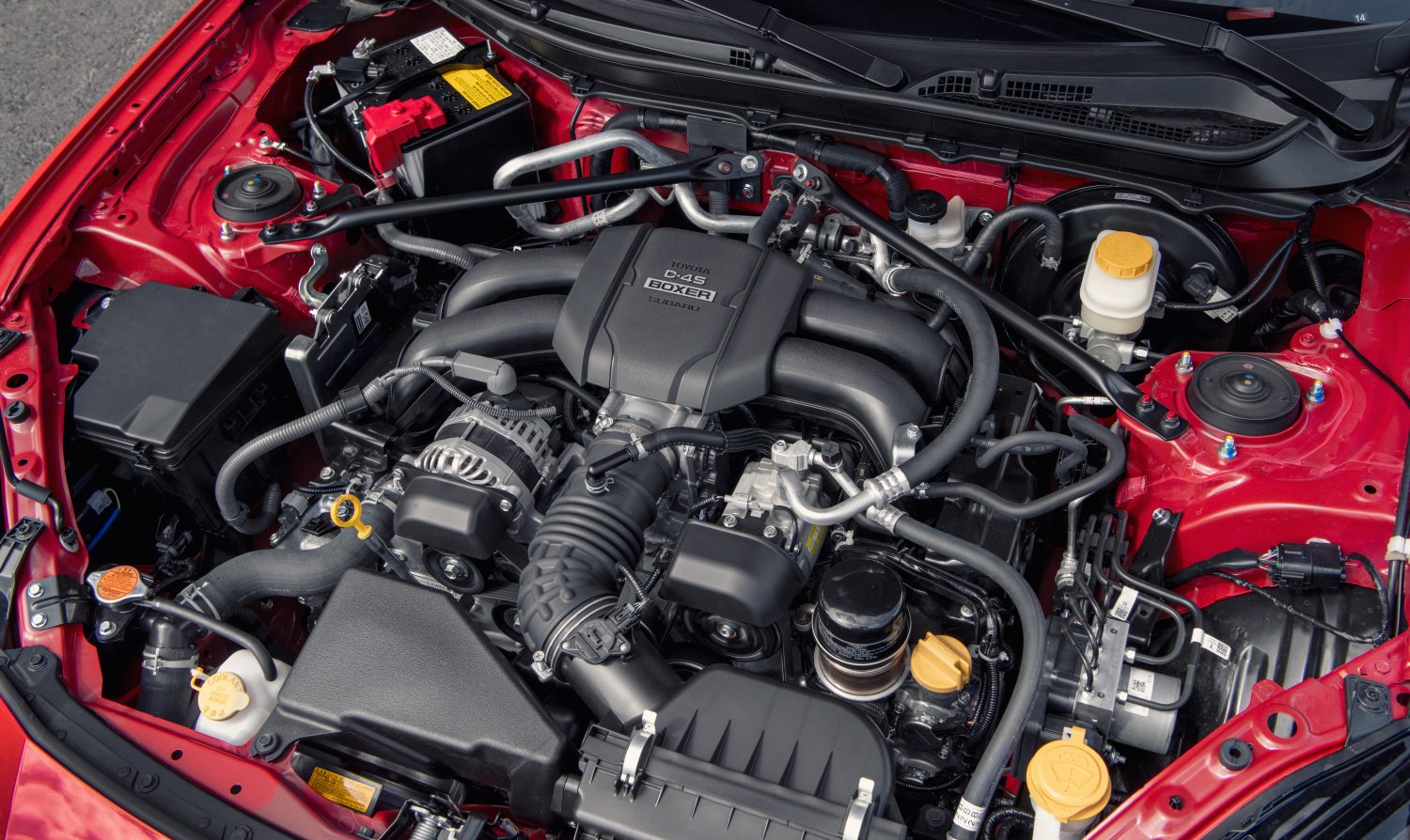 Initial acceleration is improved, with the new model going 0-60 in 6.1 seconds (0.1 seconds faster than the outgoing 86) with the manual and 6.6 seconds with the automatic.

While the GR 86 was designed for the track, it retains some of its enjoyable characteristics on the streets. This is not a car everyone will want to commute in every day, but that’s obviously not the point.

When you do need to run some errands, you can fold down the small rear seats to fit in a few more grocery bags. Or, as Toyota makes sure to point out, four new tires to use once you arrive at the track.

Style, as always, is subjective, but the changes do work to improve the new 86 compared to the outgoing model. Other than the redesigned front fascia, the easiest place where you can spot the difference is in the rear spoiler, with the duckbill on the new model drawing the eye more than the thin, elegant spoiler of the previous model. 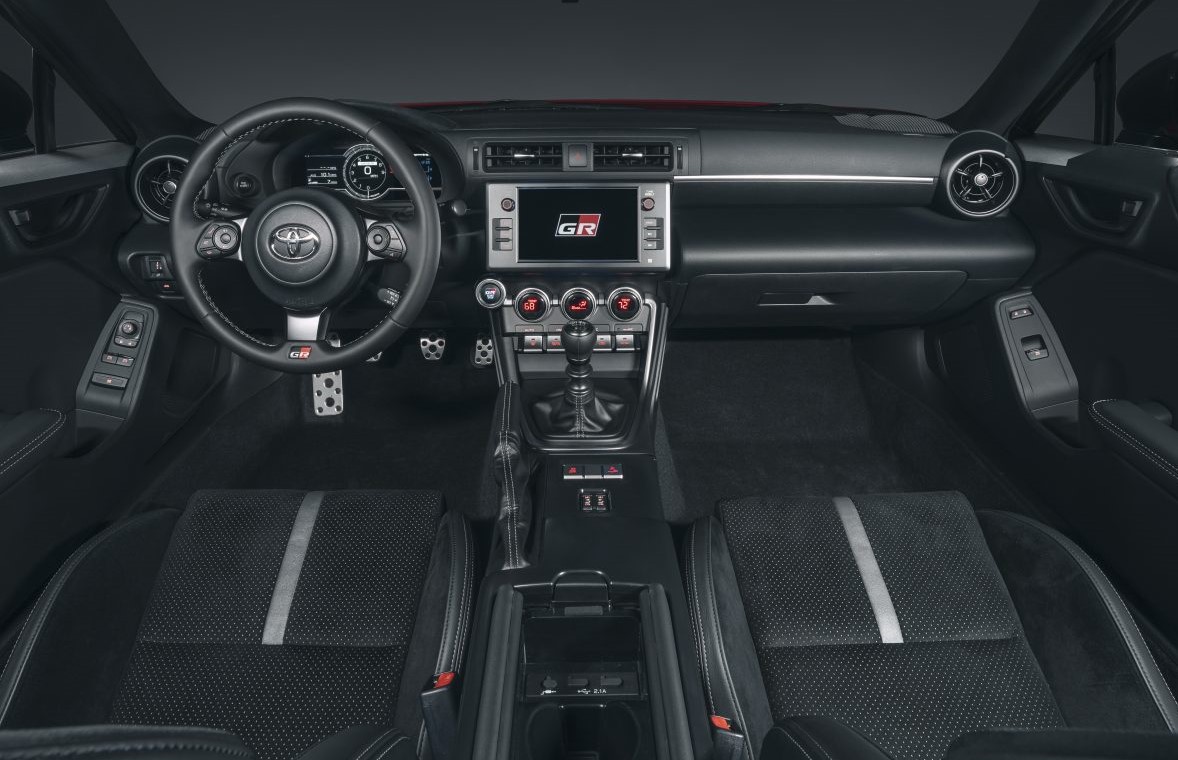 The GR 86’s interior (pictured above) has also been updated, but it still retains the relatively basic, speed-focused interior of the first-gen. The pedals and footrest are made of aluminum (on the Premium trim) and the 7-in. (18-cm) instrument panel won’t win awards for ease of use, but it does keep the information a driver needs to know easily available.

Whether the ’22 GR 86 engages more young people to check out the Toyota brand – something the company admits it is hoping for – will be interesting to watch in the coming years. For now, it’s safe to say the 86 delivers what it promised: a more fun Toyota that won’t break the bank.

I’m not usually a #SaveTheManuals freedom fighter, but on the track, rowing through the gears is unquestionably fun. The automatic is more than serviceable, but if you're getting a car to, you know, drive, you should connect to the vehicle in a way that’s measurable.

If you’re ready for an affordable Toyota performance vehicle, the GR 86 will be ready for you in November. 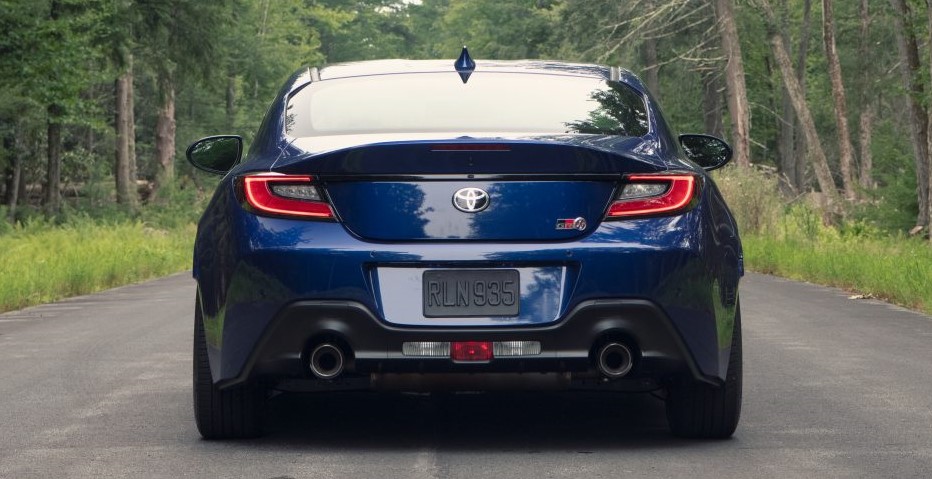