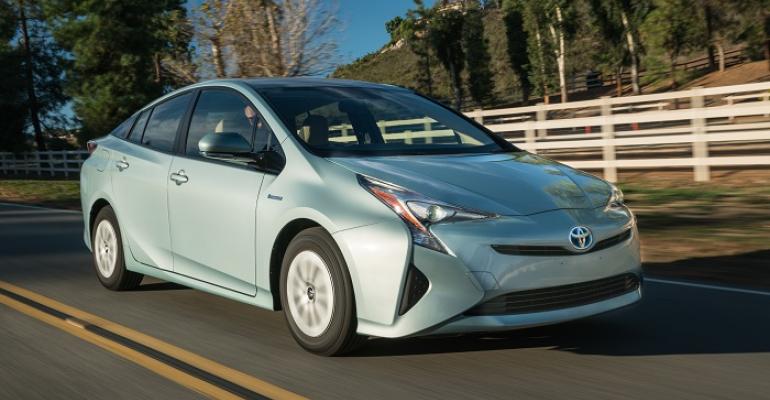 DANA POINT, CA – Six-and-a-half years ago when we reviewed the third-generation Toyota Prius upon its debut we dubbed it “tough to beat.”

We hate to gloat but, at least from a sales perspective, we were right.

Despite deliveries falling 8.8% this year as the car aged and gas prices plunged, Toyota still has sold more than 100,000 Priuses through November. The next best-selling hybrid, Toyota’s compact Prius C, has tallied 35,623 units in the same period.

Even the much ballyhooed all-electric Tesla Model S has racked up only 20,418 deliveries this year.

Yes, for most Americans when they think green they still think Prius.

With this in mind, Toyota felt confident enough to mess with the formula that made the world’s best-selling hybrid such a success.

The car still offers the most fuel-efficiency bang-for-the-buck, but it also has sportier, more confident handling, the lack of which was an oft-heard complaint of current-gen Prius owners.

A switch is made from a semi-independent torsion-beam rear suspension to a fully independent double-wishbone design. Toyota touts a one-third-less perceived road shock in tests vs. the old suspension due to tunings on the arm bushings.

The outgoing Prius’s MacPherson-strut front suspension carries over but is retuned for better responsiveness.

We weren’t so sure about this new fun-to-drive Prius, but driving is believing. After getting behind the wheel of third-gen and fourth-gen models back to back on a zig-zagging handling course, we come away believers. The outgoing Prius is floaty with its rear-end seemingly having a mind of its own; the new Prius is much more composed, with both ends of the car in unison.

Another reason for the improved responsiveness is a higher-strength body structure. There is 19% high-tensile-strength steel in the new Prius’s body vs. 3% in the outgoing model.

An aluminum hood and rear door frames help lower the car’s center of gravity 1 in. (25 mm), improving its toss-ability.

Not Lying About Li-ion

Scads of improvements predictably are made to the car’s propulsion system.

The 1.8L Atkinson-cycle 4-cyl. now is smaller and lighter than the outgoing 1.8L, with a new exhaust-gas-recirculation system that speeds up the process of warming the engine coolant, a resin cylinder head and, for noise reduction, a thinner main muffler on the exhaust system and a noise-canceling structure in the inlet duct on the intake side.

Friction of the rotating assembly of the pistons has been reduced, limiting heat loss, leading Toyota to claim the 1.8L has the best thermal efficiency of any engine in the auto industry at 40%.

A smaller transaxle and inverter allow for the car’s 12V auxiliary battery to move from the back of the vehicle to under the hood.

Parasitic power-control-unit losses are cut 20% thanks to a higher speed range and a reduction gear mounted on a parallel shaft.

The size and weight of the car’s inverter is down 33% and 11%, respectively, helping improve the fourth-gen Prius’s fuel economy over the outgoing model.

The base Prius Two model still has a nickel-metal-hydride battery, with a nominal voltage of 201.6, but it is 13% smaller and 2.5% lighter than the third-gen Prius’s NiMH.

The switch to an Li-ion, known for compactness and energy density, is a great move considering the Prius’s is 38% smaller than the old NiMH while being 40% lighter.

High fuel economy is the calling card of the Prius and the new model doesn’t disappoint, except maybe for those people who were hoping for a much-rumored 60 mpg (3.9 L/100 km) from the Eco grade.

Our worst real-world number is in the high-end Prius Four Touring grade, an uncharacteristically bad 36.5 mpg (6.4 L/100 km). But to be transparent that’s after flogging it on the expressway. We later tack on 3 mpg (1.3 km/L) coasting down a long, steep freeway exit and another couple mpg in stop-and-go traffic on Pacific Coast Highway.

The car still boasts three drive modes, EV, Eco and Power, with the latter seemingly packing more punch than before. EV mode still is only for low-speed driving. Efforts to keep it on above 20 mph (32 km/h) were futile.

Sheetmetal Pretty Out There

The powertrain revisions are to be expected.

The drastic changes to the car’s appearance are not, and are at odds with General Motors’ move to make the Chevy Volt’s appearance less oddball for wider acceptance by non-green, non-tech types.

While design is subjective, the fourth-generation Prius’s sheetmetal is pretty out there, full of weird squiggles and swoops and a big departure from the sharp creases and limited character lines seen on the outgoing model.

The bulky and cluttered rear end makes a mockery of the notion proportion is key to good design.

And like most of the latest Toyota exteriors, the Prius has a menacing face, reminiscent of the villain in a Disney cartoon.

There’s been strong negative reaction online to the Prius’s new look, but most of the blowback appears to be from non-Prius owners. At this point Toyota probably could reuse the Aztek’s body and still sell a boatload of Prii to the car’s loyal fan base, who care about fuel economy, quality and reliability above all else.

The typical midsize-sedan buyers Toyota would like to woo to increase Prius sales 30% next year may have a bigger issue with the aggressive styling.

They also could be less willing to buy a fuel-sipper now.

As of this writing, the national average for a gallon of regular unleaded is $2.05 per AAA. To green-car aficionados gas-price fluctuations are irrelevant, but they may matter to the mainstream midsize-sedan buyer Toyota plans to court.

Shines Bright, Except When Dusty

The car’s interior also undergoes a metamorphosis. We’re not crazy about every element, but there are a few noteworthy items.

The geometric-patterned seat fabric is attractive, especially with the turquoise stitching seen in a Prius Two Eco.

A glossy white center console is available in Priuses with the Qi wireless recharging pad for smartphones. It isn’t as well done as the first-generation Volt’s white center stack, which had a sparkly finish, but kudos to Toyota for trying to inject personality.

Rear seats fold down and up with great ease, while the hatch area is nicely finished, with a high-quality look and feel thanks to a thick carpeted mat.

In the not-crazy-about-it category, the black and glossy center stack, with a large touchscreen, is a magnet for dust, as seen here in several test vehicles.

A shiny finish is an easy way to add luster to what otherwise would be an economy-car interior, but owners will need to keep a microfiber cloth handy.

Cleaning of the layered IP also will be a chore, given its nooks and crannies.

Soft-touch skins are used on the instrument panel and in some grades on the upper door panels, but padding is so thin it might as well be nonexistent. It’s OK in the cheaper Prius Two, but with the upper grades buyers may want something more luxurious.

Ergonomics generally are good, although volume and tune knobs are notably small and shallow, while the center-console bin lid is hinged piano-style on the passenger side, making it difficult for a passenger to access the storage space.

Driver-seat comfort is high during our roughly 80 cumulative miles (129 km) behind the wheel of the new Prius. The front-passenger and rear-outboard seats feel good, too, although the middle seat seems to have squishier foam and definitely has limited head space for taller adults.

While Toyota claims it has greatly improved noise, vibration and harshness through more seals and insulation, we think, especially after driving the Two Eco locally in Metro Detroit on a windy day, road and wind noise still is too prevalent.

But, at a base price of $24,700, we can live with the racket in the Two Eco. Drivers of the pricier grades, including the $30,000 Prius Four Touring may not be so forgiving.

Relative affordability compared to other green cars continues to be one of the Prius’s biggest selling points.

Lots of safety and technology options are available on the Prius, with one of the most noteworthy a new automatic parking feature.

The car still can parallel-park itself, demonstrated successfully here, but Toyota also says it can pull into a perpendicular space. That wasn’t successfully demonstrated, however, probably due to the ultrasonic wave sensors being stymied by the bright sun. Rain and snow also can render sensors useless, so please find a cloudy day with no precipitation to try this out.

We kid. We still like you, Prius. And even with record low fuel prices and your crazy new look, you’re still a wise choice for people looking for comfort, fuel economy and yes, performance, in a sub-$25,000 vehicle.