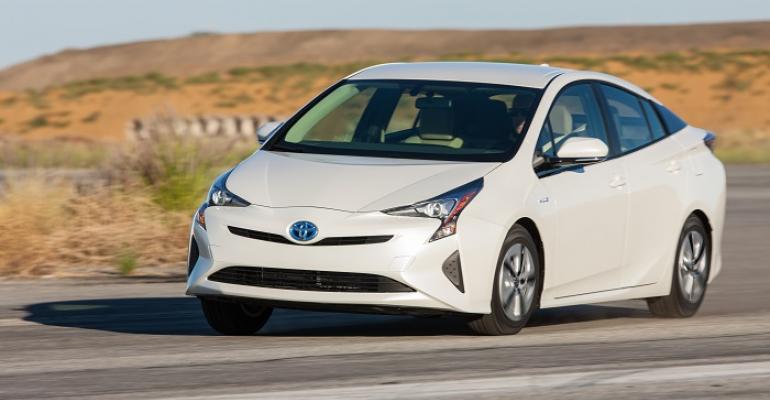 Average midsize-sedan buyers could be wooed by the latest generation of Toyota&rsquo;s dedicated hybrid, which uses a lithium-ion battery in five of its six grades.

DANA POINT, CA – Toyota hopes to see a 30% increase in Prius liftback sales in the U.S. next year as it readies the fourth generation of the hybrid for launch in January.

“We’re very optimistic this car will do much better in the marketplace (and) appeal to a much broader range of consumers,” Bill Fay, Toyota Div. group vice president, tells media here during a ’16 Prius preview.

He sees mainstream midsize-sedan owners as a possible new audience for the revamped Prius, which Toyota says has better ride and handling that should broaden its appeal beyond green-car intenders.

Fay pegs next year’s sales of the Prius liftback, the car’s original body style and the only body style fully redesigned for ’16, at roughly 140,000 units.

Toyota is on track in 2015 to sell that many liftback and Prius V wagons combined.

Through October, Toyota sold 124,121 liftbacks and wagons, down 14.0% from the same period year-ago, WardsAuto data shows.

After trickling out information on the model throughout 2015, the No.1 Japanese automaker divulges full details of the new Prius here, including its grade strategy and more specific fuel-economy estimates.

The hybrid will be offered in six grades, with the base Prius Two the only one to use a nickel-metal-hydride battery.

The Prius Two Eco model, as expected, gets a lithium-ion battery, as do all remaining grades of the car: Prius Three, Prius Three Touring, Prius Four and Prius Four Touring.

Because of the lightness of the Li-ion and a relative lack of creature features, the Prius Two Eco is projected to get the best fuel economy.

Heather Willis, a member of the Prius sales and engagement team, says the 207.2V Li-ion battery is 40% lighter than the NiMH battery in the outgoing third-gen Prius, while also being 38.5% smaller.

The officials say the automaker is offering both battery types because it wants to be cautious about introducing Li-ions, which have been problematic for some automakers due to their faster rate of degradation. Willis says the global nature of the Prius also dictated the battery strategy, and she notes there are fewer recycling opportunities in some countries for Li-ions compared with NiMHs.

We test four of the six grades here, as well as get behind the wheel of an outgoing model, and find the ’16 Prius handles better than the car it replaces, as Toyota claims.

A big reason for the improved handling, seen first-hand on a driving course here, is the switch from a semi-independent torsion-beam rear suspension to a fully independent double-wishbone design. Willis says Toyota tests show the new rear suspension has one-third-less perceived road shock than the old suspension due to tunings on the arm bushings.

The third-gen’s MacPherson-strut front suspension carries over but is retuned for better responsiveness. The car also has a 1-in. (25-mm) lower center of gravity than the model it replaces.

Forcing the car into EV mode is something we achieve only rarely, as our battery state-of-charge proves insufficient.

And EV mode still is elusive for mid- and higher-speed driving. In one instance when our SOC is sufficient, pulling away from a light at a suburban intersection, EV mode shuts down at 18 mph (29 km/h) due to “excessive accelerator,” our car tells us.

If the car’s net horsepower is greatly lower it is hard to tell, as both ’15 and ’16 models have similar acceleration characteristics.

However, Willis says 0-30 mph (48 km/h) acceleration should feel faster to most drivers due to better throttle mapping in the lower-range area. Acceleration time from 0-60 mph (97 km/h) is unchanged at 9.8 seconds.

The car’s interior is more colorful and eye-catching than before, with a glossy white lower center stack and a glossy white center console in models equipped with a Qi wireless phone-charging pad. 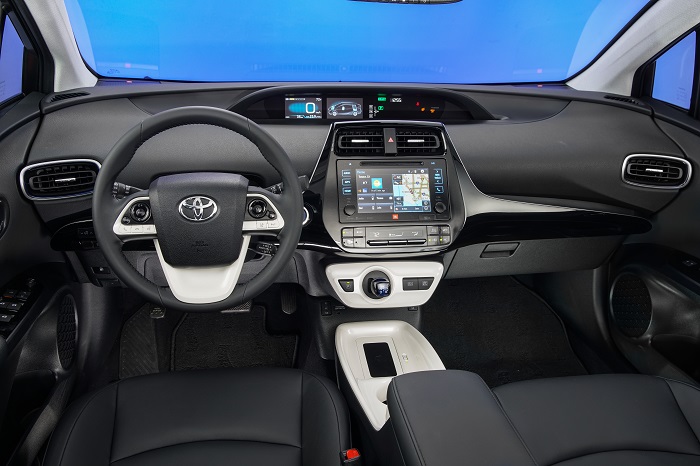 Turquoise blue or royal blue stitching is used to dress up seats to good effect.

Toyota continues to take steps toward bolder interiors, as the cloth seats in an Eco model use two different patterned fabrics, and one fabric is applied in two different shades of gray.

Likely to be a headache for owners will be keeping the glossy black upper-center stack free of dust. Models here all had varying levels of dust, which in certain lights lent an unintended sparkle to the finish.

Look for a full review of the ’16 Prius next month on WardsAuto.com.