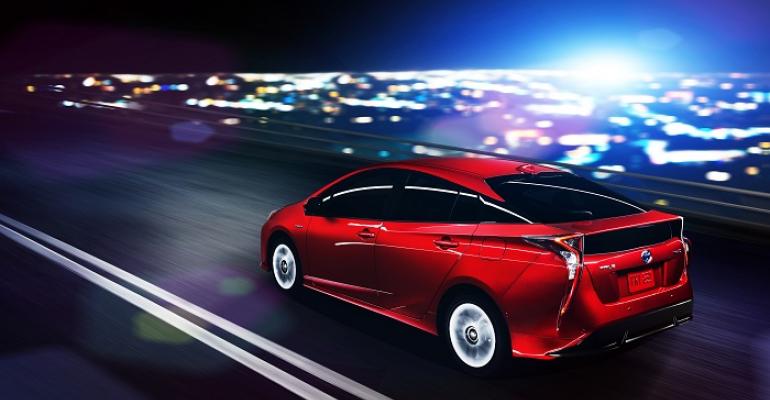 LAS VEGAS – With the fourth-generation Prius coming next year, Toyota executives are hoping to grow sales and maybe attract a different type of buyer to the hybrid.

An increase in Prius volume in 2016 “would be our expectation,” Bill Fay, senior vice president-Toyota Div. in the U.S., tells media here Wednesday night at the car’s global unveiling.

Fay is tightlipped on exactly how many Priuses Toyota can sell in the U.S. next year. Sales of the car have been trending down in recent years, as the current third-gen model has gotten older and gasoline prices have fallen.

Toyota’s best Prius volume was 181,221 in 2007, but since the recession and the introduction of the V wagon variant, annual U.S. sales of the original liftback body style are believed to have stayed below that mark.

Prius liftback and V deliveries through August of this year were down 19.0% at 99,548, WardsAuto data shows.

Toyota executives are mum on the next V and Prius C subcompact, introduced in 2012, but in a hopeful sign for fans of the cars Bob Carter, Toyota’s senior vice president-automotive operations in the U.S., says he wants to see the Prius family continue. WardsAuto forecasts it will as well, with new versions of the wagon and subcompact due next year in the U.S.

Meanwhile, Toyota officials hope by sharpening driving dynamics and upgrading the car’s interior, the forthcoming ’16 Prius can attract a new type of owner.

“We’re very optimistic in the market we’re in that we (will) broaden out our appeal with this car,” Fay says.

But Toyota hasn’t forgotten the green, tech-y types who made Prius a success.

Carter says the hybrid’s loyalists are the reason a new Eco model was created.

“For those that are very efficiency-focused, and the driving dynamics and the other attributes of this car isn’t necessarily why they have bought (three) Priuses in a row, that’s who that Eco model is designed for,” he says.

Carter won’t confirm reports the Eco will use a lithium-ion battery pack in lieu of the Prius’ standard nickel-metal-hydride pack.

Most technical details of the ’16 Prius will be announced next month at the Tokyo auto show, including battery specifications.

Carter says “to stay tuned” on the possibility of another Prius plug-in hybrid, noting the Prius’ new Toyota New Global Architecture platform can accommodate batteries for such a vehicle.

However, Fay says the Volt and other electrified models haven’t been hurting the Prius too much.

One of the car’s buyers look at most before they buy a Prius still is the Honda Civic.