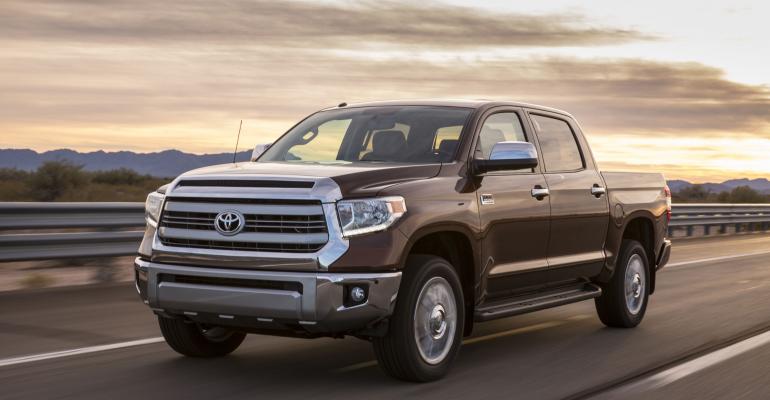 Toyota&rsquo;s fullsize pickup will get a version of the 5.0L turbodiesel V-8 coming in competitor Nissan&rsquo;s Titan truck.

According to a WardsAuto forecast, the Tundra will get a 5.0L turbodiesel V-8 from engine-maker Cummins, likely when the next-generation Tundra debuts in 2016.

This is a version of the same engine competitor Nissan will use in its next-generation Titan fullsize truck, set to debut next year in the U.S.

How different the engine will be from the Titan Cummins diesel is unclear. That mill is expected to produce more than 300 hp and more than 500 lb.-ft. (678 Nm) of torque in the Nissan truck.

A source tells WardsAuto the Cummins diesel possibly is a placeholder for Toyota, as the automaker had been working on an in-house Tundra diesel engine in 2007 and 2008.

However, the global economic downturn shelved the project, believed to be the result of a collaboration with Toyota’s Hino heavy-truck subsidiary. An in-house diesel likely would have relatively low sales numbers compared with less-expensive gasoline engines, but high development and certification costs.

However, with future, more-stringent CAFE regulations in the U.S., calling for all automakers to meet a fleet target of 54.5 mpg (4.3 L/100 km) in 2025, a diesel now is seen as a necessity for the Tundra.

If the Cummins diesel sees a lot of takers, it could prompt Toyota to reinstate its own diesel project, the source says.

The Tundra and Titan won’t be the only light-duty diesel pickups in the U.S. when they debut.

Chrysler has begun retailing its own light-duty diesel, a V-6 unit in the Ram 1500.

General Motors also has diesels in its medium-duty trucks, but recently indicated it may dust off its long-shelved 4.5L turbodiesel V-8 for light-duty applications.

And Feb. 6 at the Chicago Auto Show, Nissan showed off a 2.8L 4-cyl., 200-hp turbodiesel from Cummins in its Frontier midsize pickup, which it says may reach production if feedback to the concept is favorable.