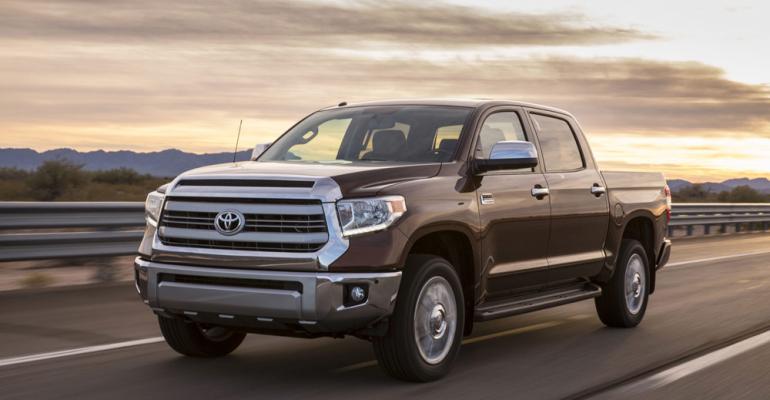 The Japanese auto maker is considering expanding truck capacity in North America as its large pickup returns to a healthier volume and sales of its smaller, 8-year-old Tacoma climb 20.9% in the year&rsquo;s first half.

“We like what we see for the fullsize-pickup market,” Bill Fay, group vice president-Toyota Div., tells media at a ’14 Tundra preview here. Exceeding the 137,000-unit target for 2014 also is possible, he says, as Toyota sees the segment returning to 2 million deliveries by 2015.

The auto maker opened a dedicated assembly plant in San Antonio exclusively to build the ’07 Tundra. But with sales on the decline, output of the smaller Tacoma compact pickup was added to soak up excess capacity at the Texas factory.

Now, with the Tundra returning to a healthier volume and the 8-year-old Tacoma’s sales up 20.9% through June, Toyota is pondering expanding truck capacity in North America, Fay says.

San Antonio’s potential 300,000-unit annual capacity, as well as the Tacoma’s second production site in Tijuana, Baja California, Mexico, may not be enough to meet demand in the mid- and long-term, he says. “We’re starting to reach our capacity, relative to our manufacturing footprint, between what we can build in San Antonio and Baja.

Fay estimates Toyota will be tapped out on truck capacity around 2020, which WardsAuto capacity-utilization data generally supports. With straight-time output of 250,000 units (200,000 in San Antonio, 50,000 in Baja), the auto maker would exceed its 100% utilization rate as early as 2015. By adding a third shift or overtime at either plant, the 100% rate would be pushed closer to 2020.

While company officials admit to some uncertainty about fullsize-pickup sales after 2025, when corporate average fuel economy of 54.5 mpg (4.3 L/100 km) is set to take effect in the U.S., Toyota believes trucks are as critical a component of the brand’s lineup, as the Camry, Corolla and Prius cars, Fay says.

With the goal of challenging the domestic pickups in mind, the ’14 Tundra receives its most extensive freshening since the truck’s debut, including a heavily updated interior and a more chiseled exterior design.

Tundra Chief Engineer Mike Sweers says criticism of the ’07-’13 Tundra’s interior as looking “too cheap” stung, as he led the interior design prior to becoming chief engineer for the ’14 model.

For the ’14 Tundra, some grades have leather seats identical to those found in Lexus models, Sweers says, and there’s more attention to detail, with some instrument panels, such as those in the new 1794 Edition, receiving hand-stitched leather inserts.

Responding to some owners’ complaints that the outgoing Tundra was “too round and bubbly,” designers worked to sharpen the truck’s lines and corners, he says. Toyota pushed its engineering capabilities to do the type of deep-draw stampings required to achieve the new model’s chiseled look.

The auto maker sees the higher grades, the 1794 Edition and Platinum, accounting for 10%-12% of total ’14 Tundra sales, based on the market’s increasing demand for more-luxurious pickups.

“We probably missed some business (with the outgoing truck) because we didn’t have enough of a variety of (premium models) to compete with some of the other trucks in the market,” Fay says. “So I think this puts us in a much better position, albeit probably a smaller part of the market, but an important part.”

The refreshed ’14 Toyota Tundra goes on sale in August at U.S. Toyota dealers.