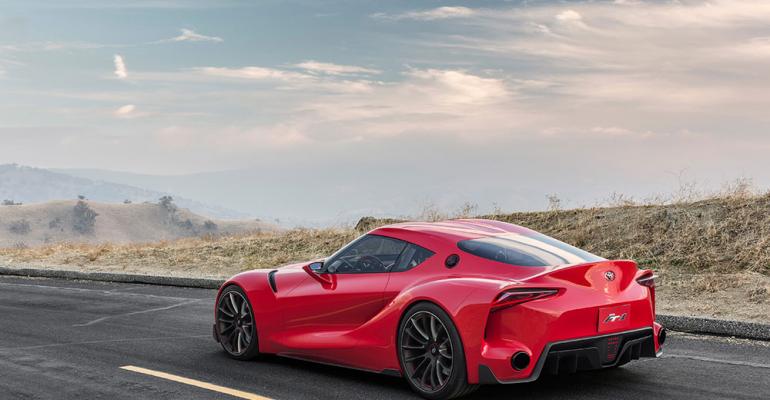 <p><strong>Sports car can be taken for spin, but only in video game.</strong></p>
Vehicles

DETROIT – The Toyota FT-1 concept is a “spiritual pace car” for the spirit of design, not a sign that the automaker is preparing a new Supra, 2000GT or Celica, says Kevin Hunter, head of Calty Design Research in California.

The sports car races virtually on the Grand Turismo 6 Playstation game after Jan. 14, but not elsewhere. At the North American International Auto Show here, there are no specifications, no horsepower estimates, no top speeds. There is only a deeply sculpted red body with A-pillars pulled far back to give the imaginary driver the best view of the road, all controls on the steering wheel and all gauges on a heads-up display.

Akio Toyoda, the new CEO of the company, wants his design teams to take more risks and design “products that connect on an emotional level,” says Hunter. “In the past we relied more on consumer studies and internal consensus. ... There is less reliance on consensus now.”

The 2-year project to create a sexy halo concept car began with high-speed research to identify requirements, then moved to virtual design of a car that was presented in a video game to CEO Toyoda.

“The FT-1 project is the kind of car we dream about working on,” Hunter says, adding it represents the idea of new design freedom rather than any guideline for future designs of real cars. Toyota does not work toward a family look, because it has such a wide range of vehicles and customers, he says.