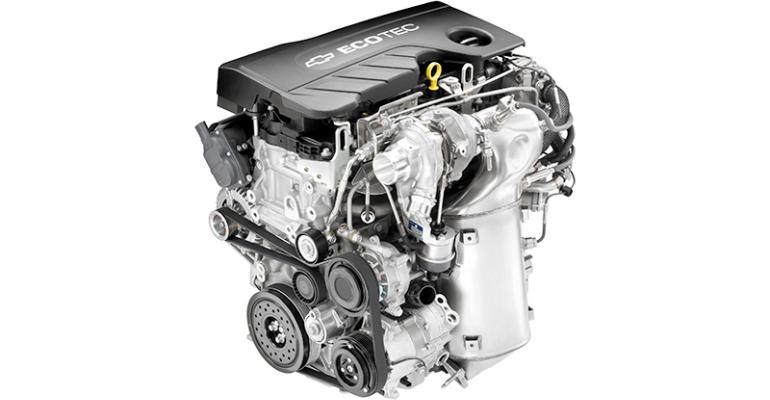 The all-new 1.6L turbodiesel earned plaudits from the European motoring press shortly after it began rolling out last year. It launches in the U.S. in 2017.

DETROIT – When the second-generation Chevrolet Cruze turbodiesel comes to market in the U.S. in 2017, the engine nicknamed “whisper diesel” will have at least one distinct advantage over its predecessor: American input.

“Our requirements here (in the U.S.) pushed it a lot,” says Mike Siegrist, assistant chief engineer, Chevy Cruze turbodiesel. “The fact that we are going to market this engine here in a Chevy Cruze helped to make it as quiet as it is.”

General Motors’ all-new 1.6L turbodiesel earned plaudits from the European motoring press shortly after it began rolling out last year in Opel products such as the Mokka small CUV. German journalists call it the “flüster diesel,” or whisper diesel, for its uncharacteristically muted noise and vibration qualities.

Europeans over the years have become accustomed to diesel clatter, mostly a result of the engine’s high-pressure fuel injectors, because that’s the region’s dominant, and cheapest, fuel. However, U.S. drivers, long bred on quiet, smooth-running gasoline V-6s and V-8s, are generally much less tolerant of diesel NVH. It’s a big reason the first diesel experiment in the U.S. in the early 1980s failed.

And while the technology has grown more civilized on both sides of the Atlantic over the years, diesel feedback remains unmistakable and coupled with a price premium of some $2,000 over a comparably equipped car with a gasoline engine, it kills the deal for most Americans.

The ’16 Cruze Clean Turbo Diesel will change that, Siegrist claims.

“This (1.6L) is much quieter,” he says, comparing it to the first-generation Cruze turbodiesel. “It will set the standard for noise and vibration in the industry when it comes to the U.S. When you drive this vehicle, it is transparent.”

That’s high praise for the newcomer, because GM’s first-gen, 2.0L turbodiesel won a 2014 Ward’s 10 Best Engines award in the Cruze. WardsAuto editors observed some NVH at low speeds, but found it quieter than its German counterparts and doted over its torquey performance and fuel economy that reached 46.7 mpg (5.0 L/100 km) during one long-distance test.

Siegrist says the low-speed NVH of the 2.0L is nowhere to be found in the 1.6L.

“You barely notice it is a diesel, even at idle,” he tells WardsAuto on the sidelines of Chevrolet technology event here. “It’s a huge step up compared to our first entry in the market.”

A tried and true application for GM in Europe, the 2.0L turbodiesel required a fair bit of homologation for the U.S., chiefly sound dampening to the engine compartment to meet customer expectations for NVH and a selective catalytic reduction system to meet U.S. emissions regulations.

But with an eye on the U.S. market from the get-go for the 1.6L turbodiesel, American engineers were brought on board shortly after the basic architecture was released from GM’s small-diesel engine center of expertise in Turin, Italy.

“It’s a totally different approach and a key reason why this will be so successful,” Siegrist says. “This was designed from the ground up to meet global requirements.”

One big change was moving the timing chain from the front of the engine to the rear, where the transmission can act as natural sound abatement. The camshaft cover is made of glass-fiber reinforced plastic instead of aluminum and isolated from the cylinder to prevent it from broadcasting unwanted noise. Sound-absorption material is added to the fuel rail and injectors, as well, along with “all sorts of other little details” Siegrist says he’ll keep to himself until it launches.

​Siegrist did not have to worry about integrating SCR this around since it now is necessary in Europe, but his team continues the laborious job of tuning the emissions system for the U.S.

“Probably the hardest thing is the diagnostics for the emissions system,” he admits. “It is much more difficult here, and then there are the environmental conditions – it’s a lot hotter, it’s a lot colder and you can drive to much higher altitudes.”

The 1.6L also gets a lighter aluminum block, whereas the 2.0L used cast iron. The displacement shrinks and power density rises, although GM has not released horsepower or torque figures. Fuel economy, another figure GM plans to keep a lid on until launch, also improves.

The global approach to the 1.6L gives Siegrist confidence the second-gen Cruze turbodiesel will be more competitive against its chief rival, the Volkswagen Jetta turbodiesel.

Last year, the Cruze turbodiesel accounted for about 3.0% of the car’s 273,060 sales, compared with an estimated take-rate of 25% of the Jetta turbodiesel’s 160,873 deliveries, according to WardsAuto engine installation data.

Siegrist says those results met GM’s expectations. The bar will be much higher this time around.

“We’re going directly at our pals, the German manufacturers, and we plan to be the leader in the market before it is over,” Siegrist says. “We plan to lead there, not just be part of it.”