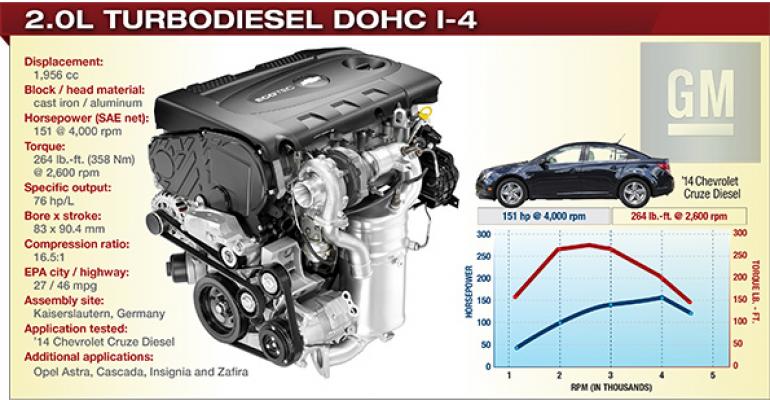 Clearly it will take time to find a following like VW has developed over decades in the U.S. But as far as the engine itself is concerned, the GM 2.0L turbodiesel is a strong start.

When a team of GM Powertrain engineers set out to modify a tried-and-true GM of Europe turbodiesel I-4 for U.S. Chevrolet Cruze compacts, it had a clear target in mind: the Volkswagen Jetta TDI 2.0L diesel.

When they were done, says assistant chief engineer Mike Siegrist, they felt they had beaten VW's excellent 4-cyl. in almost every way.

"I believe we have a superior product," he says. "It's powerful, efficient and clean, and it will change perceptions of what a diesel car can be."

It certainly made WardsAuto editors believers. The more time they spent in the car, the more they liked it.

"This is an excellent diesel engine," said one editor. "It stands toe-to-toe with the best from Germany."

WardsAuto editors praised its torquey performance, though some criticized its low-speed noise, vibration and harshness characteristics. That is, until they found it compared well to much more expensive diesel luxury vehicles.

Interestingly, this 2.0L DOHC 16-valve I-4 diesel is a derivative of one used in European Opel Astras, Insignias and Zafiras, but not the same-size engine that powers Cruze diesel cars in other parts of the world. Why? Because the Opel engine was chosen as a better candidate for adaptation to North America.

"For General Motors to introduce a diesel passenger car in the U.S. for the first time in 25 years," Siegrist says, "many engine and vehicle combinations were considered, and this one was picked as best suited for the American market. It had to make good torque, have great fuel economy and low emissions and be able to deal with U.S. OBD II diagnostics rules."

Its dual camshafts are belt driven, and its Bosch common-rail fuel system uses Piezo injectors capable of multiple injections per cycle. The engine also features aluminum pistons that are oil-jet cooled, a variable-displacement oil pump for energy efficiency and an intercooled, variable-nozzle turbocharger mounted close to the engine for fast "light off" and quick throttle response.

There were lots of challenges during development, but the two toughest were emissions and diagnostics. "We run 150,000-mile (241,000-km) vehicles to age the exhaust aftertreatment systems and establish their deterioration factors. That's a long, risky road to travel without any issues."

He explains that mandated OBD II requirements come in two categories: operational diagnostics, where the mass-airflow sensor illuminates a warning light and sends a code to the computer that is stored, and emissions-system diagnostics.

"You can imagine the complexity of that," Siegrist says. "It's a very complex monitor that works whenever the engine is running to ensure that the system is operating properly to continually meet the law."

"SCR is at the leading edge of innovation and technology," Siegrist says. It was quite a challenge, especially in the two-and-a-half-year timeframe we had."

The system has an oxidation catalyst and a particulate trap up front, close to the engine, and a DEF injector and mixer ahead of the SCR catalyst. DEF is diffused into the exhaust stream on its way to the SCR catalyst, which then reduces oxides of nitrogen emissions.

"The SCR catalyst has to reach a certain temperature to attain the efficiency we need," he says, "which needs to happen as soon as possible. So we use special strategies with the fuel injection (such as adding fuel) to get it up to temperature as quickly as possible while minimizing the impact on fuel economy."

Siegrist says the Cruze diesel team used some of the same engineers and took advantage of knowledge gained from GM's application of SCR on its Duramax diesel-powered heavy-duty pickups. He says GM's next North American diesel, an option on ’16 Chevy Colorado and GMC Canyon midsize pickups, then will leverage what engineers have learned from this program.

He also credits Bosch as a key partner that supplies many essential components and helped with the calibration. The control software was developed by Bosch and GM, and the common-rail fuel injection system, fuel pump and injectors are made by Bosch.

And Siegrist emphasizes it was very much a global program. "GM's small diesel product team is in Torino, Italy, the engine is built in Kaiserslautern, Germany, the calibration was done in the U.S., and the car is assembled in Lordstown, OH.

"We took this engine out of Torino, made the modifications for North America, and all the new parts were designed here in Pontiac, MI. So this was a huge collaboration between Torino, Pontiac and Milford, MI, where we do our calibration."

Is there room for future improvement? "There is always room," Siegrist says. "This was our attempt to enter the North American market (with a small passenger-car diesel), and there is potential for improved products. I can't get into specifics, but we are not sitting still."

But the new Jetta TDI also will use an SCR system. That will make it cleaner, but the considerable added expense also will lower the cost advantage it initially enjoyed over the Cruze.

Because the new 2.0L is GM’s first passenger-car diesel in 25 years, officials always have been circumspect about what sales would be. Through the first half of 2014, they have not set the world on fire, just 2,979 units through June, according to WardsAuto data.

That’s small compared with the 18,940 sales of the Jetta diesel and 17,180 deliveries for the Passat diesel, the two best sellers in the U.S., but fourth highest of the 13 diesel cars currently available in the U.S.

Clearly it will take some time to find a following like VW has developed after decades in the U.S. But as far as the engine itself is concerned, the GM 2.0L turbodiesel is a strong start.