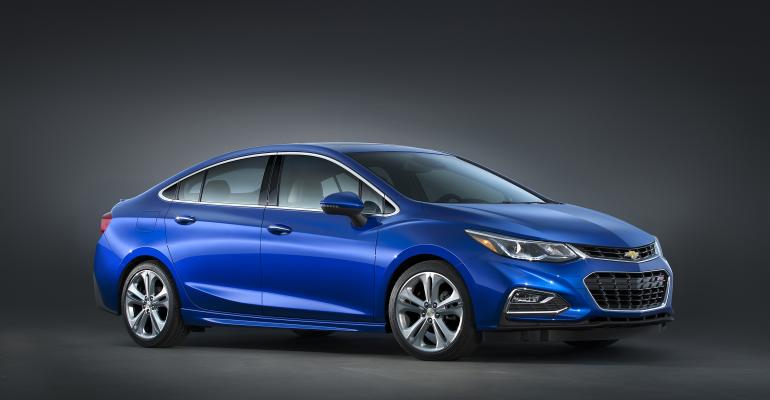 WARREN, MI – General Motors for the first time publicly shows the redesigned ’16 Chevrolet Cruze, a second-generation version of the small car expected to run rings around its predecessor in term of styling, interior technology, driving dynamics and profitability.

“We’ve optimized Chevrolet on a global scale,” GM North America President Alan Batey tells WardsAuto during a recent sneak peek at the car. “This is a demonstration of that.”

The first-generation Cruze sedan combined 15 different global compact cars into one and accounted for 3.5 million sales worldwide during its 7-year run, including 1.12 million units in the U.S. since 2010, according to WardsAuto data.

The combination gave GM’s compact-car entry economies of scale it had never witnessed before – its North American offerings were famous money-losers a decade ago – and the new Cruze is expected sell even more and reportedly will generate upwards of $2,000 of profit per vehicle over its predecessor.

Only the Chinese version of the new Cruze differs notably from the car going on sale next year in 114 other countries. Otherwise, the car leverages a global platform with slight country-specific tweaks to meet local consumer wants and regulations.

“Our competitors have a very deep centralized model – ‘You will get what we give you,’” Batey explains. “We’re using a very different model. We have to have global guidelines, global structure, global oversight, but the local insights are critical to win.

“What we’ve got is the right mixture, so if you’re sitting in Korea and you’re the marketing manager for this product, you’ve got a voice and we’re listening. That structure is working well for us.”

The new Cruze also should benefit from a larger footprint, while at the same time shedding 250 lbs. (115 kg), adding new content such as emerging smartphone technology, and featuring a redesigned, more efficient and potent powertrain.

However, Stephanie Brinley, an analyst with IHS in Southfield, MI, warns the redesigned Cruze occupies a segment under tremendous pressure from smaller cars and compact CUVs. A redesigned Honda Civic, a segment leader, also comes out later this year.

“It will be a competitive segment,” she says.

But the potential to earn more money off the Cruze exists, she adds.

“Being able to maximize the things that can be shared between regions will be helpful, but what should benefit Chevrolet is the technology they are adding and the premium materials,” Brinley says. “Consumers are willing to pay for that, which inherently improves profit margins.”

The new Cruze will be one of the first products from GM to receive Android Auto and Apple CarPlay capability, as well as wireless phone charging. Those technologies come on top of an available OnStar 4G LTE wireless Internet connection.

But the technology upgrades are not limited to smartphones. The Cruze’s all-new 1.4L turbocharged Ecotec 4-cyl. with gasoline direct injection makes 153 hp, a 12-hp bump up from the old engine. The Cruze’s torque output moves to 177 lb.-ft. (240 Nm) from 148 lb.-ft. (200 Nm). The car’s 6-speed transmission also is new, as is a standard stop/start system.

The new gasoline engine’s block shifts from cast iron to aluminum, like its cylinder head, contributing to greater efficiency and weight savings. Other engine-efficiency enhancements are achieved through low-friction piston rings and a low-friction camshaft drive and oil pump.

The reworked powertrain complements an all-new vehicle architecture underpinning the Cruze. It is 27% stiffer and 53 lbs. (24 kg) lighter than its predecessor, GM says, which results in better driving dynamics. The body structure is larger, too, providing a 1-in. (25-mm) longer wheelbase and front and rear suspensions with wider tracks.

“The Cruze’s chassis system is perhaps the most mass-efficient in the segment,” says Ron Arnesen, executive chief engineer-Cruze. “It is at the core of the car’s dynamic driving character, which is designed to deliver fun with an enhanced feeling of connectivity.”

Interior designers pushed the feeling of spaciousness further by blending the instrument panel into the doors to achieve the trademark dual-cockpit of other Chevy cars. Surfaces are layered and muscular, but also modern and passenger-focused, punctuated by a standard MyLink infotainment screen atop the center stack.

Other key interior changes include a repositioned shifter and cup holders, additional storage options, more soft-touch surfaces and animal-grained, micro-etched surfacing that GM says enhances the premium look and feel of the interior.

The exterior of the second-generation Cruze draws inspiration from the redesigned Chevy Malibu midsize car, which also comes to market later this year, and the Chevy Impala large car, which debuted last year.

John Cafaro, executive director-design at Chevrolet, says the Cruze’s expressive exterior will set it apart in the small-car segment.

“The Cruze’s approach to proportion and premium details adds to Chevrolet’s elevation of craftsmanship, content, quality, and a fresh interpretation on an identity that is unmistakably Chevrolet in every market around the world.”

Headlamps of the Cruze now sweep into the front fenders and the car receives a restyled, stacked dual-port grille design. Models with LT and Premier trim levels receive premium forward-lighting systems, which include projector-beam headlamps and LED daytime running lamps.

On the safety front, the Cruze retains the 10 airbags that helps it achieve a 5-star crashworthiness rating from NHTSA, and the new model adds available active-safety items such as side blindspot and rear cross-traffic alerts, lane-keep assist and forward-collision alert.

U.S. production of the Cruze remains at GM’s Lordstown, OH, assembly plant, which recently received a $50 million investment to retool for the car.

Reports indicate a first-ever hatchback variant could closely follow the sedan’s first-quarter 2016 launch in the U.S.