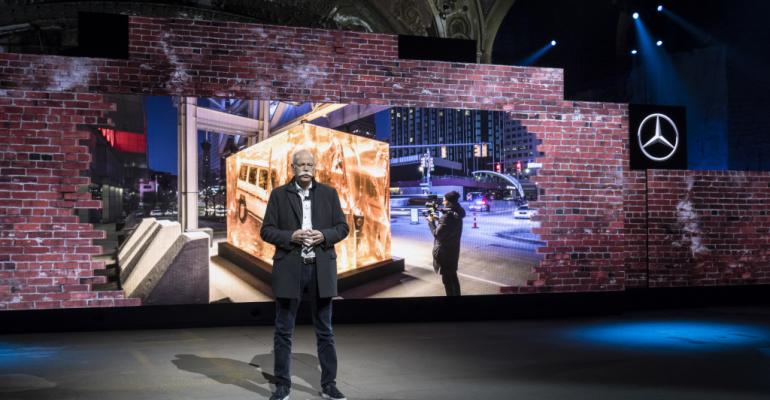 The automaker isn&rsquo;t looking to move to fully autonomous cars in a single jump, saying neither the technology nor market will be ready soon.

Although seen as one of the leaders in autonomous-vehicle development in its work with supplier Bosch, the German automaker is taking a realistic – if not cautious – view of the future amid all the hype.

“I’ve seen a lot of announcements in this industry in this area in particular, and ultimately we’ll have to judge based on facts,” Daimler CEO Dieter Zetsche says when asked who will win the race to market with driverless cars.

While Zetsche believes Daimler’s plans are ambitious, he says the technology still isn’t fully formulated, and once it is it still will need to find an audience to be viable.

“At the end of the day you need use cases,” he tells reporters during a wide-ranging discussion at the North American International Auto Show. “We are not there yet.

“I think it’s accepted by us that (Waymo) has the lead in technology,” he adds. “But we haven’t seen them in customer applications yet, (to) some extent because of a lack of a business model, which is an important ingredient.”

Zetsche describes a two-pronged strategy at Daimler, with plans for steady, step-by-step advancement in driver-assistance technology to be rolled out on its mainstream models, creating a foundational building block for autonomous vehicles even as more experimental work continues on fully driverless cars, mostly for limited fleet use.

“At the end of development, those (two strands) will merge into one thing,” he says.

Some automakers, including Ford for example, envision skipping intermediate stages and bringing to market Level 4 or 5 autonomous vehicles that do away with driver controls.

“We definitely will go to Level 3 (first) on this safety-driven development (track), and I think it would be bad if you wouldn’t,” Zetsche says. Level 3 systems will perform some self-driving such as highway piloting, but ultimately require a human to take control under certain conditions.

The Daimler CEO says there’s still plenty to sort out on the development front before autonomous cars can be expected to navigate roads as safely as those piloted by humans.

“It’s true that 90% of accidents are caused by driver (error), so intuitively you say, of course, an autonomous car is safer,” he says. But in between those accidents “the human being is doing a damn good job. To avoid these accidents…is not that difficult (for autonomous cars). But to become as good as a human being in the in-between is a damn tough task.”

A report released today by researcher Navigant rates Daimler-Bosch among the top three companies in autonomous-vehicle development, trailing only Waymo and General Motors. Navigant lauds Daimler’s Level 2 system in the ’18 S-Class, adding: “With its broad lineup of passenger and commercial vehicles from the small Smart city cars to long-haul trucks, Daimler can leverage automation and services over a broad range of market segments.”

Zetsche doesn’t comment directly on that report but says he is comfortable with the path Daimler is on.

“We are confident we will develop (the technology) according to our plans,” he says. “They are ambitious (plans), and we think we are well-positioned.”

New Mercedes G-Class Changes Mostly Everything and Almost Nothing
Jan 14, 2018