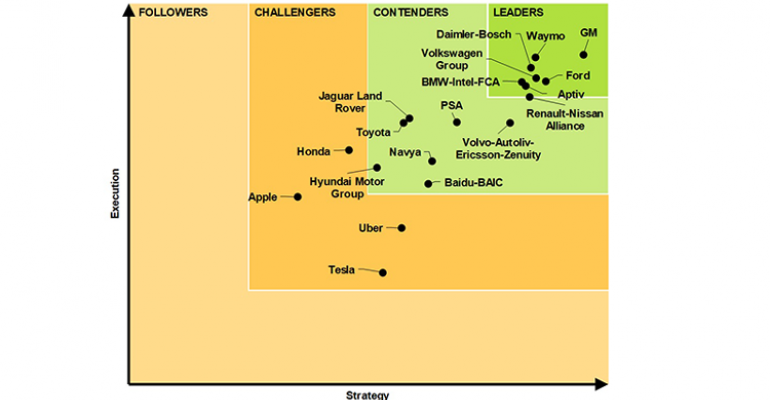 Ford drops from first to fourth in the researcher&rsquo;s rankings, as others step up the pace to bring self-driving vehicles to market.

General Motors and Waymo have leapfrogged Ford and now lead the pack in the race to market autonomous vehicles, researcher Navigant says.

In its new report card, an update of one released in April that had Ford in the pole position, Navigant says GM and Waymo “are effectively in a dead heat” at the top, with Daimler-Bosch and Volkswagen Group following closely and Ford now in the fourth spot.

This is the first redo of the Navigant ranking that is expected to continue to see shuffling as autonomous-vehicle technology begins to roll out over the next few years and become ubiquitous by the end of the next decade.

Navigant says Ford’s fall from No.1 has less to do with the automaker’s autonomous plans and early execution – seen as still solid  (or even more so) under new CEO Jim Hackett – and more to do with rapid advancement and more-intense focus at GM and others.

“This shift in the Leaderboard shows the highly dynamic nature of this market, with players able to make major moves forward with the right tie-ups and investment,” Navigant says.

The consultancy ranks autonomous-vehicle players based on their plans and track record for execution, looking at everything from vision, go-to-market strategy, partnerships and production strategy to product capability and quality, product portfolio and staying power.

Also landing in the Leaders group in the Navigant rankings are the consortium of BMW-Intel-FCA, the Renault-Nissan Alliance and Aptiv (formerly Delphi). Toyota, PSA and Volvo are among those in Navigant’s second tier with Tesla, Honda, Apple and Uber among those rated as third-tier “Challengers.”

“Notably, Tesla, perceived by many mainstream observers as a leader in automated driving, ranked last in this Leaderboard, tied with Apple in the Challengers group,” Navigant says in the new report. “While Tesla has been aggressive in promoting Autopilot, since ending its relationship with Mobileye the company has struggled to reach the same level of functionality with its in-house developed system.”

Navigant did not slot any companies into its fourth category of Followers.

The researcher says AVs that do come to market over the next several years will be a wide mix of small EVs, such as the Chevrolet Bolt that is leading GM’s efforts, to commercial vehicles and specialty vehicles such as airport shuttles.