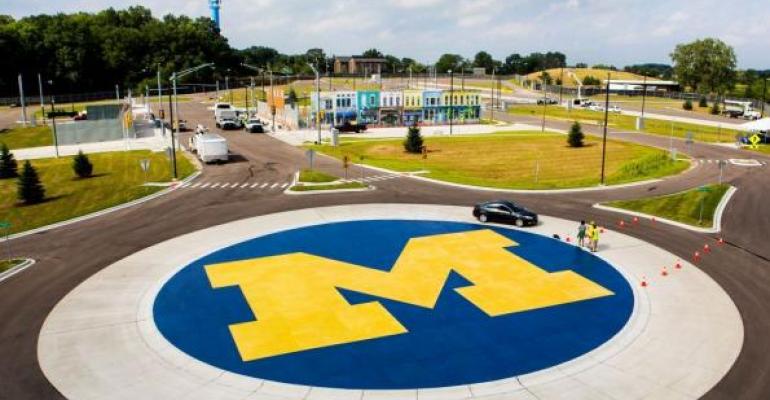 University of Michigan and Ford researchers say the added weight, electricity demand and aerodynamic drag of the sensors and computers used in autonomous vehicles contribute significantly to their lifetime energy use and greenhouse-gas emissions.

Autonomous vehicles’ lifetime savings on energy use and greenhouse-gas emissions are lower than at first glance, University of Michigan and Ford researchers conclude.

Their study finds the added weight, electricity demand and aerodynamic drag of the sensors and computers used in autonomous vehicles contribute significantly to their lifetime energy use and GHG emissions.

But the study says when the savings from the efficiencies associated with self-driving vehicles are factored into the equation, the net result still is a reduction in lifetime energy use and associated GHGs of up to 9%.

Co-author Gregory Keoleian, director of the Center for Sustainable Systems at U-M’s School for Environment and Sustainability, says the study explored the tradeoffs between the increased environmental impacts of adding autonomous-vehicle equipment with the expected gains in driving efficiency.

“Our findings highlight the need to focus on energy efficiency when designing autonomous vehicles so that the full environmental benefits of this emerging, transformative technology can be realized,” Keoleian says in a statement.

The findings are published in the journal Environmental Science & Technology.

The study, supported by grants from Ford, is a detailed assessment of the lifetime contributions of autonomous vehicles’ sensing and computing subsystems to energy use and associated GHGs.

The researchers looked at two types of connected and automated vehicles (CAVs), those powered by internal-combustion engines and battery-powered electric motors. The two vehicle types were paired with sensing and computer subsystems of three sizes – small, medium and large – to create six scenarios.

Life-cycle assessment methodology was then used to estimate lifetime energy use and GHG emissions for each scenario, from cradle to grave.

The key finding is autonomous vehicles with electric powertrains have lifetime GHG emissions 40% lower than ICE-powered vehicles. This is because of the inefficiencies involved in producing electricity from fuel combustion, as well as a sharper fuel-consumption increase when extra mass is added to an ICE vehicle.

Lead author Jim Gawron says the research shows a battery EV is a better platform for CAV components compared with the ICE-powered vehicle in terms of minimizing environmental impacts.

Gawron, a graduate student at the U-M School for Environment and Sustainability and at the Ross School of Business, worked on the study as part of his master’s thesis.

Keoleian and Gawron were joined in the study by Robert De Kleine, Timothy Wallington and Hyung Chul Kim of Ford.

Their research shows the sensing and computing subsystems in CAVs can increase a vehicle’s energy use and GHG emissions 3% to 20% due to increases in power consumption, weight and aerodynamic drag.

But the operational benefits of autonomous vehicles, which include smoother, more efficient traffic flow, are expected to outweigh those increases in most cases.

The study finds wireless data transmissions needed for onboard navigation maps significantly contribute to a CAV’s energy use and associated greenhouse-gas emissions – and the resolution of the maps makes a huge difference.

The added weight and power demand from the onboard computer also produce significant impacts.

For the medium-size sensing and computing subsystem that served as the baseline scenario in the study, the computer contributed 45% of the weight, consumed 80% of the power and was responsible for 43% of GHG emissions.

Sensing and computing components will continue to be miniaturized and packaged more compactly, but in the near term, the size and shape of exterior-mounted equipment will have substantial impacts.

The researchers say there are several caveats about their study.

Their conclusions are based on the assumption that operational efficiencies of CAVs can lead to a 14% reduction in fuel consumption over conventional vehicles, a figure drawn from an analysis of previous work by the National Renewable Energy Laboratory.

If the real-world savings from CAV efficiencies are significantly lower than 14%, the environmental benefits are diminished or vanish completely, the new study says.

Also, if the onboard computers require much more power than the 200 watts modeled in the study, the net emissions reductions are eliminated.

The vehicles used in the study are Level 4 CAV – vehicles that can operate without human input or oversight under particular conditions. Prototype Level 4 CAVs are among the vehicles being tested at U-M’s Mcity, a public-private R&D initiative working on the transformation to connected and automated mobility.