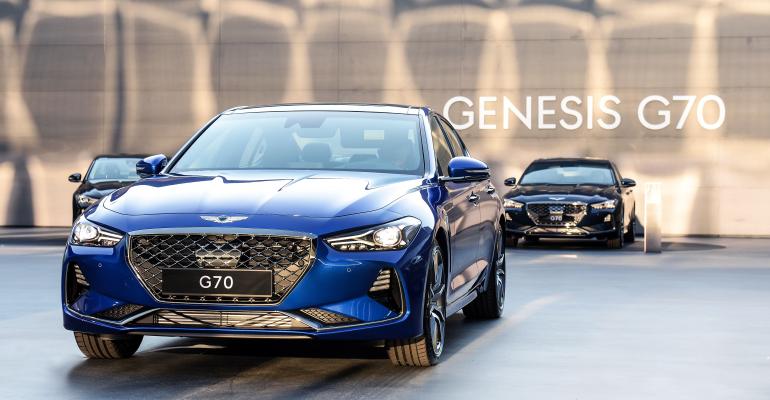 On the market in Korea since 2015, Hyundai plans to bring its Highway Driving Assist feature to the U.S. in 2019, on a refreshed G90 and the next-generation Sonata.

SUPERIOR TOWNSHIP, MI – The march toward fully autonomous vehicles is fraught with roadblocks, perhaps one of the most significant being the high electrical consumption of AVs.

For this reason, a top Hyundai AV official says self-drivers likely will be coming later than sooner, and they won’t be full battery-electric vehicles as many presume.

“We are developing the fully autonomous technology, the driverless car – (SAE) Level 4 and Level 5, but as of now the power consumption is really huge, it can go up to 1 kW or 2 kW, so it could dramatically decrease the driving range of EVs,” Woongjung Jang, director-advanced driver assist systems for Hyundai, says here at a recent Hyundai media event.

Jang tells WardsAuto that while next-generation computing chips are expected to reduce power consumption dramatically, it won’t be at the rate Hyundai wants.

Because of the power draw of AVs – a result of the vehicles’ extreme data-processing needs – a full battery-electric propulsion system likely won’t work for the early Level 4 and Level 5 AVs.

“We have no option but to either go with the plug-in hybrid, hybrid or (hydrogen-)fuel-cell EV,” he says. “So driving range is really essential, as of now…it’ll be solved, but not any time in the near future.”

Jang says using a combustion-based engine to supply the “huge amounts of power” to self-driving systems is possible, but it would require an alternator on the engine to generate the power, “which means electric power fluctuates a lot.”

Cost is another concern Hyundai has, noting the first AVs will be pricey and out of reach for most consumers.

For this reason, the Korean automaker, like many other automakers, sees AVs’ first applications occurring at the fleet level, with mobility providers. A mobility service provider will be able to offset the high cost of self-driving vehicles by eliminating the need to pay a driver’s fee, Jang says.

While a human driver can account for 70% or 80% of the cost of a fare, mobility providers with AVs in their fleet will be able to keep 100% of what customers are paying for the service, he reasons.

“I don’t think we’ll be able to achieve an affordable price level (until) 2025 so that we can bring this technology to the mass market,” Jang says.

Despite many automakers and suppliers targeting the early 2020s for introduction of full AVs, Hyundai believes that timeline is appropriate only for geo-fenced vehicles that drive on limited routes. AVs operating outside defined boundaries and controlled settings likely won’t be available for mass-market consumers until 2025, he says. For further clarification, a different Hyundai executive has been quoted as saying the automaker won’t have full AVs suitable for urban driving until 2030.

Hyundai has what it considers to be a Level 2 autonomous system, Highway Driving Assist, available on some vehicles in its home market of South Korea, including the Genesis G70, G80 and G90 sedans, as well as Hyundai-brand Azera and Sonata sedans and the Hyundai Santa Fe CUV.

On the market in Korea since 2015, Hyundai plans to bring HDA to the U.S. in 2019 on a refreshed G90 and the next-generation Sonata.

Jang says the 4-year delay between the Korean-market and U.S. introduction of HDA is due to its high demand in Korea, noting the feature has a 70%-80% take rate on the vehicles on which it is offered in the country.

He also says the sheer size of the U.S. has slowed HDA’s implementation here.

“There’s so much (ground) to cover and we need to ensure our information on our map databases are accurate on every highway, so it’s taking some time to go through and verify all those,” Jang says.

Judging by its reported descriptions, HDA is similar to Nissan’s soon-to-launch ProPilot technology, in that it blends adaptive cruise control and lane-keep assist into one feature.

Jang says HDA does not have self-steering, noting the system will warn the driver if his or her hands are removed from the wheel, making it more akin to ProPilot and Tesla’s Autopilot than Cadillac’s hands-off Super Cruise highway system, the latter considered by some to be Level 2.5 autonomous technology.

“You can take your hands off, but there’s a regulation that forces the vehicle to provide a warning,” he says, adding such warnings will become more apparent in the future per a European Union regulation for 2019 that stipulates a visual warning after 15 seconds of a driver’s hands off the wheel, and an audio-visual warning after 30 seconds.

Still up in the air is what entities will be permitted to collect and store the data generated by AVs.

“We will need to store it, because the mobility service provider has to go through us to get access to the data,” Jang says. “(But) it is yet to be determined how much data we store without compromising the privacy of the driver or also how much we’re allowed to share that data to the mobility service provider. There’s a lot of discussion and I think there’s no clear rule yet in this industry on that area.”

Jang says 10 gigabytes of data are generated in real time, every second, by Hyundai’s AVs, but it only stores what he says is “essential” data, with some stored on the vehicle and off-loaded later to a server and some uploaded to the cloud.

A Dell EMC official recently told WardsAuto all automakers likely will have to collect and store all AV data in a searchable database for R&D and legal purposes. The official said current AVs generate 30 terabytes of data per day, 3,000 times the value of the data Twitter users generate every day.