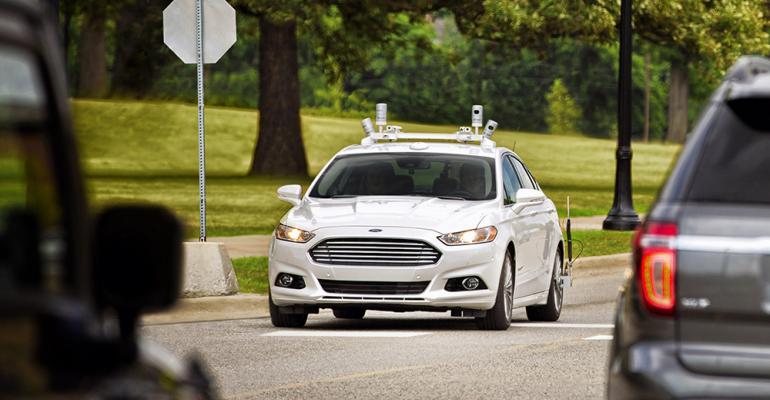 Companies with great technology but not keeping their eye on information technology risk infringing on third-party IP and being excluded from the market.&nbsp;Waiting to address IP until after development and deployment will be too late.&nbsp;&nbsp;

Autonomous vehicles are being developed at an astonishingly rapid pace. The transformative technological change is disrupting the automotive industry. Indeed, autonomous vehicles will change the entire model of transportation and the players that will drive the industry forward.

The race to develop autonomous vehicles includes many entrants, from traditional automotive companies to leading-edge technology companies and entirely new technology entrants who have little or no experience operating in the unique automotive-supply chain. Along with powerhouses like Google and Apple, other significant companies are participating. For example, Baidu, a China search-engine giant, announced committing a 100-person autonomous vehicle team in Silicon Valley.

Major chip companies are investing, too. Qualcomm very recently announced its purchase of NXP, referring in its announcement to “NXP’s leading industry sales channels and positions in automotive, security and IoT.”

Autonomous vehicles incorporate technologies not previously contemplated for conventional vehicles and such companies are playing in an arena where there are significant challenges to integrating traditional hardware (vehicles) and software. In reaction, governmental regulators are taking steps to address regulation of such vehicles.

This creates a classic situation of deep and significant IP opportunities, as well as potential IP and product-liability risks.

In its 2016 State of Self-Driving Automotive Innovation, business-information service Thompson Reuters reports that approximately 22,000 patents have issued between January 2010 and October 2015 in the self-driving space, which includes autonomous driving, driver assistance and telematics (vehicle-to-vehicle communication). The report states that autonomous driving is the clear leader, estimating about 2,200-3,750 patents per year during the study period. The filings are dominated by certain automakers such as Toyota, Honda, Nissan, Hyundai, Mitsubishi), Tier 1 suppliers including Bosch and Denso and some pure tech companies such as Google).

The study also shows a patent thicket is forming, and certain traditional automotive OEMs and some technology companies are dominating the patent landscape at this point. To be sure, the field remains open for high-tech companies, whether hardware or software-focused, to develop and obtain protection for fundamental technology that will define autonomous driving.

At the same time, companies with great technology but not keeping their eye on IP are subjecting themselves to the risk of infringing on third-party IP and being excluded from the market. (Put aside the net positive that IP brings to a company’s valuation.) Waiting to address IP until after development and deployment will simply be too late. The normal automotive platform cycle brings the issue into great clarity. Companies cannot just make changes in existing, approved automotive platforms – they need to plan for the future.

The players developing autonomous-driving technology need to navigate the growing patent thicket. Employing clearance studies during the development process represents basic blocking and tackling. Just as importantly, companies should make intentional decisions about protecting their own IP, whether by patents or another form such as copyrights or trade secrets. They also should implement company procedures using best practices for achieving maximum protection.

Strong IP brings real benefits, including using a patent portfolio, at least for defensive purposes against competitors should they try to exclude the company from the marketplace, and increasing company value for present or future investors/buyers/collaborators and going on the offensive if another party invades or misappropriates the IP.

Implications of the IP Thicket and Beyond

To be clear, autonomous vehicles present a whole new level of complication to IP and product-liability issues. The traditional automotive industry already presents a particularly complicated IP and supply-chain landscape due to the diverse horizontal and vertical chain of companies providing the many pieces to create an integrated whole. Add to it the technology to make a vehicle autonomous (and being used in a connected-car fashion), and the IP and product liability issues multiply.

First, the technology array of patents expands multifold in the case of autonomous vehicles. Patents relating to computer technology, telecommunications, robotics and displays represent just a few areas. This wide spectrum presents greater risks and rewards. Companies must consider this spectrum for defensive clearance purposes. At the same time, companies have broader ability to develop advanced technologies to differentiate themselves in the marketplace and gain patent protection to protect that differentiation.

Second, many players have a part in developing an integrated product, such as an infotainment system. They span from hardware chip makers to software suppliers to materials makers, who all have limited or no experience dealing with the historical automotive supply-chain environment. Yet, patents do not necessarily fall nicely into one precise area, creating complications for the vendor-customer relationships.

One specific issue relates to who carries the responsibility for evaluating and defending against third-party IP. In addition, entry of these non-traditional players creates business and regulatory challenges where the automotive industry already faces much uncertainty surrounding liability issues automakers seek to shift to the supplier.

For regulatory issues, the role of governments will be critical, especially for proposing and regulating liability limiting and/or sharing mechanisms and bridging the mindset of the traditional automotive OEM and the technology-focused supplier.

Third, autonomous-vehicle technology entails areas beyond traditional automotive technology, especially cybersecurity and privacy. These issues are particularly acute and are emerging as potentially even greater than the traditional patent issues arising from technology development. Companies can consider utilizing best practices from other industries where such issues have existed for many years.

Autonomous vehicles represent an incredible opportunity for companies to invest in an area that will transform transportation. Staying ahead of, or at least keeping pace with, the curve on the IP side helps protect (and maybe even accelerate) that investment.

Pavan Agarwal is a partner and intellectual-property lawyer at Foley & Lardner LLP, where he has extensive experience representing electronics and automotive manufacturing clients in several patent-heavy U.S. Federal District Courts and the International Trade Commission. He can be reached at [email protected].​

Daljit Doogal is a partner and business lawyer at Foley & Lardner LLP, where he is the managing partner of the Detroit office and chair of the firm’s Business Law Department in Detroit. He focuses his practice on corporate-, securities- and restructuring law matters within the automotive, financial and corporate transactions realms. He can be reached at [email protected].