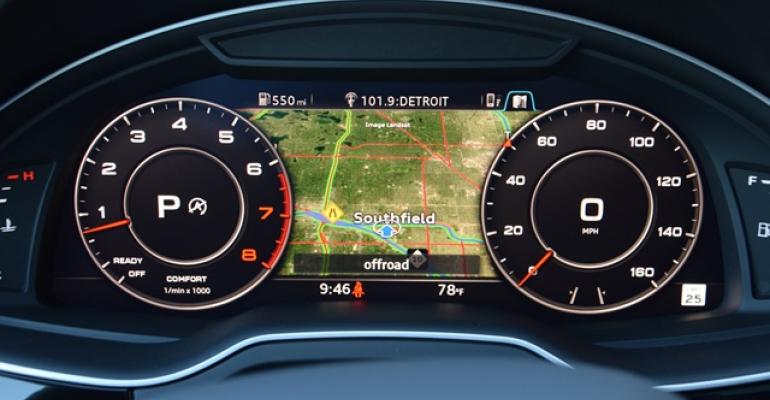 What we love about the Q7 is the ease with which its functions can be customized for every driver, including the tech lover who craves full engagement and the old-school type who wants to ignore the outside world and merely enjoy the drive.

Audi was well-positioned to impress our editorial judges as we embarked this past summer on the first-ever Wards 10 Best User Experiences competition.

This emerging sphere of vehicle development, dedicated to exploring the linkage between man and machine, had taken a sizable step forward with Audi’s Virtual Cockpit, a digital and visual wonderland that melds information, entertainment and access to mission-critical vehicle functions without exacerbating the scourge of driver distraction.

Three Audis equipped with this technology – the A4, Q7 and TTS – were evaluated last winter for Wards 10 Best Interiors, and it was a struggle deciding which one belonged on that list. We opted for the stylish and cleverly packaged TTS.

Along comes our new UX competition, which recognizes the Q7 user experience for surprising and delighting us every which way to Sunday.

The Q7 is a benchmark among user experiences, with its high-resolution and brightly colored graphics, simple phone pairing and touchpad that recognizes hand-written characters as well as its intuitive MultiMedia Interface central controller that will give you emails and text messages and easy access to multiple entertainment options.

What we love about the Q7 is the ease with which its functions can be customized for every driver, including the tech lover who craves full engagement and the old-school type who wants to ignore the outside world and merely enjoy the drive. A button on the instrument panel allows the 7-in. (18-cm) center MMI display to disappear, like an envelope into a mail slot.

Like other new vehicles on our 10 Best UX list advancing the prospect of autonomous vehicles, the Q7 can drive and steer itself in many circumstances, such as on the highway and in heavy traffic. Adaptive cruise control will bring the vehicle to a complete stop, and the “automatic go” function will have the Q7 restart on its own. The vehicle also is smart enough to route you around traffic.

Here’s a feature we haven’t seen before: ACC is tied to the navigation system, so it will try to reduce your speed in anticipation of a turn into a side street or a freeway exit ramp. But you can overrule this thoughtful driver aid.

Well equipped with features such as a stellar Bose 3D surround-sound audio system, traffic-sign recognition and power folding third-row seats, the Audi Q7 is a functional, intuitive and technologically advanced CUV that can accommodate seven, reasonably priced for under $73,000.

And it looks terrific along the way.