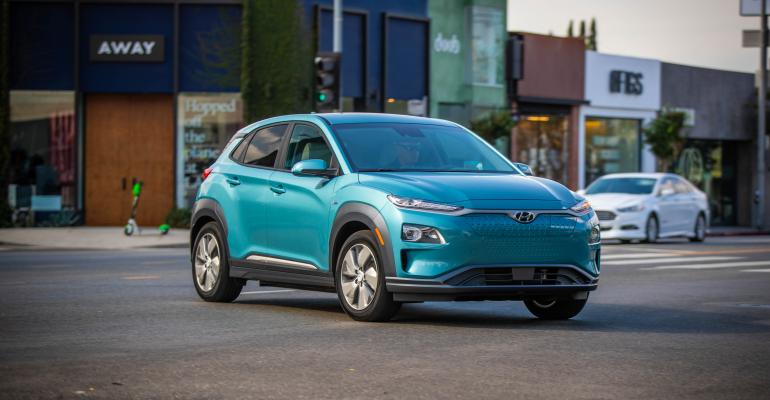 This year, for the first time in a while, all my picks were the same as most of my fellow jurors.

DETROIT – I’ve been a juror for the North American Car, Truck and Utility awards for well over a decade. Lots of times my picks have differed from those of my 50-plus fellow jury members, but I’ve never thought any of the winners were undeserving.

The finalists in each category always stand out from the pack, but because I have more of an industry point of view and I also spend the year judging the Wards 10 Best Engines, Wards 10 Best Interiors and Wards 10 Best User Experiences, sometimes I see things differently.

Many times, I’ve not given points to wonderful cars and trucks simply because I thought they were too expensive or enthusiast-oriented to be a true vehicle of the year, which I think should be mainstream and relatively affordable.

But this year, for the first time in a while, all my picks were the same as most of my fellow jurors.

The Genesis G70 won Car of the Year, the Hyundai Kona won utility of the year and Ram 1500 won truck of the year.

Unlike some past years, the choices seemed very clear this time around. For decades, one automaker after another has vowed to “out BMW, BMW,” but Genesis finally did it with the G70, delivering an incredibly responsive tight-handling sport sedan from the golden era of sport sedans, before they became soft and bloated luxury cars.

The G70 has the razor-sharp handling of the BMW 3-Series that enthusiasts wistfully remember, but still has a roomy back seat, nicely appointed interior and all the user-experience and connectivity features anyone could want, yet it still is priced thousands less than the current BMW 3-Series. The all-new 3-Series will be in next year’s competition.

Whichever engine and driveline option you choose, the G70 is delightful.

The other finalists in the category, the Honda Insight hybrid-electric sedan and the Volvo S60/V60 are both excellent cars. The Insight is a handsome step up from a Civic that gets up to 55 mpg (4.3 L/100 km) in the city. The Volvo S60/V60 models are beautifully designed and fun to drive, but do not inspire the same passion as the G70.

The 2019 utility/crossover of the year seemed equally clear cut. The Acura RDX is a great package and has a state-of-the art driver interface that some people don’t like, but if you spend 10 minutes learning the system you find it is remarkably easy and intuitive. It comes with a powerful and efficient 4-cyl. engine and an interior that is roomy, attractive and practical. And its base price of $37,400 makes it pretty affordable.

And then there is the Jaguar I-Pace. It is a beautifully styled battery-electric crossover with a 234-mile (377 km) range. It is breathtakingly Ferrari-like fast, plus it will go off-road and fiord streams like no other EV. But the dealbreaker for me, and apparently many fellow jurors, was it was just too expensive to be utility of year. It starts at $69,500 and was so expensive we could not even test it for our Wards 10 Best Engines competition because our price cap this year was $64,000.

The Hyundai Kona stood out for being stylish, practical, fun-to-drive and starting at less than $20,000. We also tested the EV version which also is very affordable, about $30,000 after incentives, and we named it a 2019 Wards 10 Best Engines winner.

It’s thrilling to drive and has impressive range of 258 miles (415 km), about the best you can get these days from an affordable EV. This duo proved to be an unbeatable combination for most us on the NACTOY jury as well.

Lastly, there is the truck category. All the pickups coming out of Detroit are good, but the Ram1500 stood out this year with design innovations from top to bottom and was a slam dunk for me.