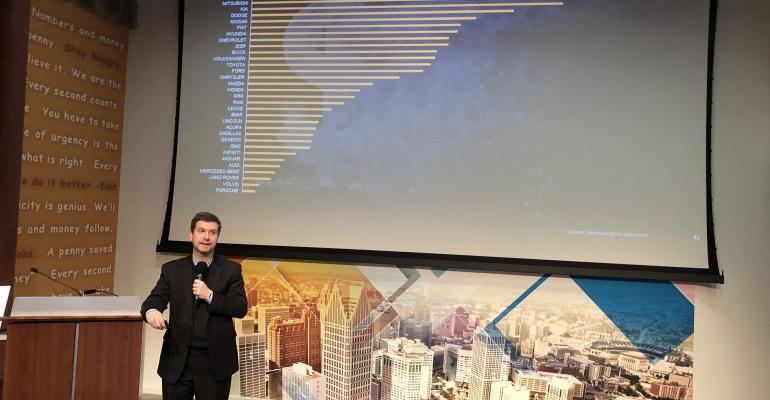 “The question you hear all the time from consumers is, ‘Who can afford these new vehicles?’” says Charlie Chesbrough, Cox Automotive’s senior economist.

DETROIT – So-called gently used vehicles are giving new ones a run for their money, an economist says here as the Motor City prepares for its big annual auto show featuring the industry’s latest offerings.

The slightly used vehicles typically have low mileage and are only a few years old. They usually are off-lease and often sold at dealerships through certified pre-owned vehicle programs.

Their growing popularity reflects a consumer reaction to the rising cost of new vehicles. The average transaction price for those now averages nearly $38,000. That’s enough to send many consumers to the used-car lot.

“The gently used vehicles are offered for a lot less money than new,” Chesbrough says during a Cox Automotive industry overview for journalists as a prelude to the North American International Auto Show. “The question you hear all the time from consumers is, ‘Who can afford these new vehicles?’”

The auto industry had a better-than-expected 2018 with sales of about 17.2 million new units. “It was a great year, but 2019 is looking a little more difficult,” says Chesbrough. Cox is predicting new-vehicle sales of about 16.8 million this year. About 40 million used vehicles were sold last year.

“Last year, the industry benefited from a strong economy and the tax reform act that gave consumers more money to spend,” he says.

But he adds tax refunds this year are not expected to be as much as they were in 2017 because tax withholding tables “were too aggressively adjusted.” The average 2018 tax refund was $2,800.

“The affordability issue is reducing the pool of people able to buy a new vehicle,” Smoke says.

For the average consumer, car-buying decisions particularly are tied to monthly payments, and those are going up, he says. “What really influences consumer behavior is the monthly payment. Astoundingly, 40% of those are $500 a month, and the share of $600 and over is increasing. The average payment reached $533 in 2018.”