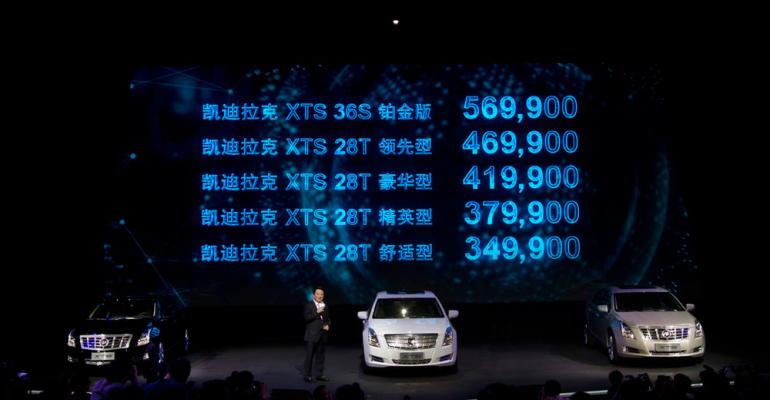 GM earlier this year launched the XTS large sedan in China, a key piece of the auto maker&rsquo;s plan to expand Cadillac sales in the country to more than 100,000 units by 2015.

NEW YORK – Cadillac global marketing chief Bob Ferguson says the General Motors luxury brand will add production of the all-new ATS compact sports sedan to its growing stable of vehicles in China as early as the end of this year and expects to follow it up with sales of the latest-generation CTS midsize sedan.

“We’re eager to get (the ATS) in the marketplace late this year, early next year,” Ferguson says after unveiling the redesigned-for-’14 CTS at the New York International Auto Show.

GM earlier this year launched the XTS large sedan in China with a ceremony in Guangzhou. The car is a key product in the auto maker’s plan to expand Cadillac sales in the country to more than 100,000 units by 2015 and improve its share of the luxury segment to 10% by 2020.

Last year, Cadillac sold about 30,000 units in China, mostly imported, for a share of less than 5%.

“The XTS is off to a great start there,” Ferguson reports. “Orders are strong.”

Shanghai GM began local production of the car in February, and in March it sold 2,006 units in the model’s first full month on the market. Cadillac sold a record 3,629 vehicles in China last month.

In addition to the XTS, Cadillac in China sells the SRX 5-passenger cross/utility vehicle, current-generation CTS and a handful of Escalade large SUVs. It recently ceased production of the SLS large sedan.

Future plans for the brand call for an independent Cadillac assembly plant in China producing one new model annually over the next five years and growing its count of storefronts within the next 12 to 18 months to upwards of 300 from 200 currently.

“We have to build the (Cadillac) portfolio, and it has to be a credible portfolio,” Bob Socia, GM’s top executive in China, recently told WardsAuto. “Then you have to have the dealers behind you. Even with the limited portfolio we have right now, the dealers are willing to make the investment because they see the potential for the brand.”

Expect the CTS to arrive in China next year, Ferguson says, although there are no plans to build the car there.

The third-generation CTS was redesigned from stem to stern for ’14, with all-new exterior and interior styling, advanced technology such as the brand’s CUE infotainment system, and the addition of the 2.0L turbo 4-cyl. engine from the ATS that skirts China’s expensive engine tax.

GM expects the Chinese market, where in the first quarter the auto maker and its joint-venture partners sold a record 816,373 units, to grow to 30 million vehicles by the end of the decade from between 20 million and 21 million units this year. Some experts forecast demand for luxury vehicles to grow to 3 million units from 1.25 million today.

Cadillac’s presence in international markets is a key element of growing its reputation as global luxury brand, Ferguson says, noting 70% of Chinese consumers consider a brand’s international reputation important, while 56% of U.S. buyers say the same. “Credibility on a global basis is important to the luxury consumer,” he tells WardsAuto.

“Cadillac’s growth is exciting and compares favorably” with the competition, he says.

Despite the addition of a 3.6L twin-turbo V-6 engine to the ’14 CTS, as well as a new V-Sport option package of performance items, Ferguson says CTS marketing in the coming months will differ from the advertising ushering in the ATS last year. ATS ads boldly emphasized the car’s performance attributes.

“Consumers tell us (CTS) performance is very important,” he says, adding, “Our marketing campaign will be markedly different than what we are doing for ATS.”

Ferguson does not see Cadillac following suit. “The ATS is drawing in a lot of introductory consumers to Cadillac, so I’m comfortable with where we are now.”