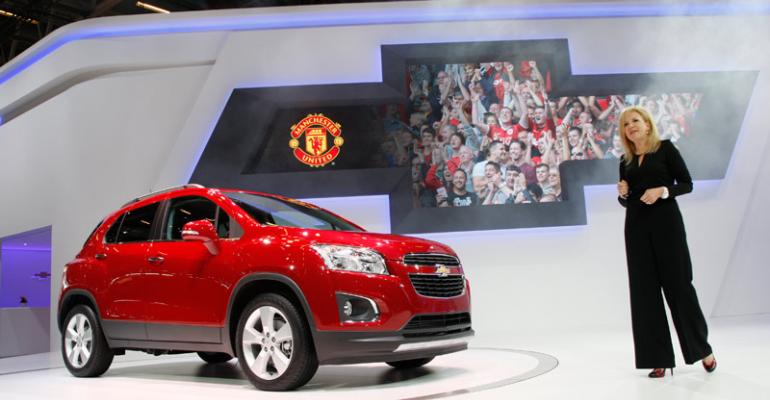 &ldquo;If a luxury brand is successful in Europe, whether (it&rsquo;s) Chanel or Prada, or Mercedes or BMW, people in parts of Asia look to see what Europeans validate as true luxury,&rdquo; GM executive Susan Docherty says.

DETROIT – Susan Docherty, president and managing director of Chevrolet and Cadillac in Europe, says the luxury brand’s global aspirations hinge on its success in Europe and claims reuniting Opel with other General Motors brands in the region will save the auto maker millions of dollars annually.

“We have to make Cadillac successful in Europe,” she tells WardsAuto in an interview here.

That’s because Chinese consumers “validate their luxury experience on what they see from European luxury brands,” says Docherty, who was dispatched to Zurich, Switzerland, from General Motors International Operations based in Shanghai where she led sales, marketing and aftersales, to oversee the launch of GM’s bookend brands in Europe last year.

GM in 2011 laid out a roadmap for its global operations with Chevrolet as its volume brand and Cadillac as the chief luxury marque. GMC and Buick would function as regional complements.

But whereas Chevrolet arguably hit the ground running after assimilating much of South Korean Daewoo’s global product and distribution footprint, a process that began in 2005, Cadillac is starting from scratch in Europe and Asia.

Limited distribution of the GM luxury brand in Europe stalled in 2009, when Kroymans, its local importer, went bankrupt. However, Cadillac’s success was in question before the collapse, because the brand lacked the diesel powertrains European car buyers demand. Authenticity of the product also was suspect.

“We’ve had a number of different strategies over the years,” Docherty admits. “We know which ones don’t work.”

The SRX now ranks as Cadillac’s most-popular vehicle in Europe, and the all-new ATS 2.0L turbo gasoline compact sports sedan joins the lineup this year. Yet, the brand still lacks the diesels it needs to fully compete.

Sales expectations, therefore, remain modest. Last year, Cadillac delivered 2,274 vehicles in Western and Central Europe, including Russia, according to WardsAuto data. GM in the near-term targets about 3,000 units annually from the brand’s 37 dealerships.

“The secret recipe for Cadillac in Europe is a diesel powertrain across the lineup, (and) vehicles that are the right size and can compete on (emissions),” Docherty says.

The European Union will move to a fleet carbon-dioxide emissions standard of 95 g/km by 2020. Vehicles not meeting their targets will continue to face steep taxation.

Docherty declines to provide a timetable on the diesel powertrains, although North America will get an oil-burner for the ATS, so it stands to reason Europe would see it first. She also admits the compact ATS narrowly misses the sweet spot for European luxury buyers, suggesting a slightly smaller sedan or compact utility/vehicle should be added.

“As we grow throughout the end of this decade, we have to be looking at products like that to be considered a serious player,” Docherty says, which then will translate to success elsewhere in the world, especially in the booming Chinese market where the growth potential for luxury appears limitless.

GM currently sells the Cadillac SLS, CTS line, SRX and Escalade Hybrid in China. Only the SLS is built locally, while the others are imported with steep taxes. Plans call for local production of the XTS sedan to begin later this year, which eventually will supplant the SLS.

GM also is eying local production of the ATS, which will be imported to China in the near term.

“If a luxury brand is successful in Europe, whether that brand is Chanel or Prada, or Mercedes or BMW, people in parts of Asia look to see what Europeans validate as true luxury,” says Docherty, who previously held chief marketing and sales positions for GM in Asia and the U.S.

“So we have to get Cadillac rocking and rolling in Europe to get it going in China.”

The trick for Chevrolet in Europe, she says, will be acquainting consumers with products beyond Corvette and Camaro. Although neither car sells in volume in the region, their global notoriety make performance a top-of-mind attribute of Chevrolet among consumers.

But most European buyers cite exterior design and value as their reason for purchasing a Chevrolet.

“What they don’t know is (the) Spark and Aveo and Cruze and Orlando, and the newest one we’re about to launch, (the) Trax,” Docherty says. “Not only are we trying to (raise) the opinion of Chevrolet and Cadillac, we’ve got to increase the overall awareness.”

The Chevy Trax CUV, which launches sales this month in South Korea where it is produced, arrives in Europe in the coming weeks to join the popular small SUV segment there, which GM forecasts will grow 15% annually through 2015. It arrives with a 1.7L diesel engine among the three powertrain choices.

“So (GM) is making the commitment to grow Chevrolet by giving us the specific powertrains we need to succeed,” Docherty says.

Chevrolet also has a new global marketing message with “Fine New Roads” and major sponsorship with the Manchester United football club. The team’s global brand is among the strongest in all of sports. The sponsorship includes the Chevrolet bow-tie emblem on the team’s jerseys next year.

Manchester United reaches more fans than any other team in any other sport. A match earlier this year with rival Liverpool netted 550 million viewers, or three times the number of American football fans who watch the Super Bowl.

In the past 18 months, GM has launched 10 new Chevrolet products in Europe, with the brand delivering 401,094 units in Western and Central Europe last year, including Russia, according to WardsAuto data. Market-leader Volkswagen, by comparison, sold 2.08 million units in 2012.

“We’re a small player in Europe but with some pretty big ambitions for growth,” Docherty says. “We want to play a key role in helping Chevrolet grow globally.”

Docherty dismisses the notion efforts to expand Chevrolet and Cadillac sales in Europe might be hindered by the weak economy. After all, she says, auto makers in the region still will deliver an estimated 14.5 million units this year.

“That’s still a hell of a big market,” she says. “I say to my team that ‘14 million people are going to be out there buying a car. We just need to get our fair share.’”

Docherty says GM continues to make progress reuniting Opel with other GM brands in Europe. The auto maker broke off Opel from its operations there when it dissolved GM Europe ahead of its U.S. bankruptcy in 2009. The plan was to sell Opel, but GM later changed course and chose to restructure the unit.

Now GM must integrate Opel with its other brands and eliminate duplicate work in areas such as back-office administrative functions. The auto maker also continues to bring its disparate information-technology platforms together, including Daewoo legacy systems dating back to earlier in the previous decade.

“It’s worth millions,” Docherty says of the potential efficiency gains.

An earlier version of this story incorrectly included front-office administrative functions among the duplicate areas GM seeks to eliminate among its European brands.