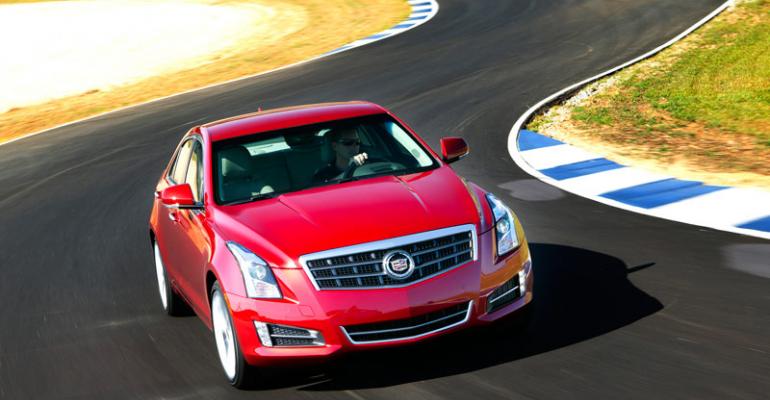 Marketing chief Don Butler says the brand continues a bullish push into China, although the pace of its return to Europe will be much more deliberate.

BIRMINGHAM, MI – Cadillac can move up from No.4 in the U.S. luxury-vehicle segment and claim the top spot within two years, marketing chief Don Butler says, citing a rebuilt reputation and product offensive that will result in as many as 10 new or significantly refreshed products in the U.S. by 2015.

Butler also says the General Motors luxury brand continues a bullish push into China, where it will start producing the XTS fullsize sedan later this year, although the pace of its return to Europe will be much more deliberate.

“We are slugging it out for No.1 in the U.S.,” he tells WardsAuto at a business update here Tuesday. “We’re not obsessed with being No.1, it will just be a result. We have reason to be confident.”

Butler notes that Cadillac held its ground last year despite its 943 U.S. dealers operating with a 3-product showroom covering only 50% of the market’s segments. The arrival of the XTS and ATS compact sports sedan will widen its coverage to 80%. A refreshed SRX midsize cross/utility vehicle comes this fall.

The near-term plan calls for the debut of a production-ready ELR extended-range electric vehicle within the next 12 months. The car, which already has been shown in concept form, is based on the Chevy Volt architecture but features more expressive styling and performance.

The ELR will be joined in that timeframe by production-intent debuts of the next-generation CTS sedan and Escalade fullsize SUV.

Butler declines to elaborate on products beyond those specific models, but admits the brand still has the remaining 20% of the market to cover in coming years.

Butler also likes the strength of Cadillac’s dealer network, which has undergone storefront and service upgrades, and says the vehicles the brand has introduced in recent years such as the CTS, SRX and Escalade all occupy the top three spots in their respective segments. “We have a track record,” he says.

Early reception to the XTS, which replaces the former DTS and STS large sedans, has been positive, Butler says, predicting volume in August will eclipse the 1,739 deliveries made in July. He thinks sales of the car should double soon, as two-thirds of the brand’s dealers have not received a vehicle and most have buyers ready.

GM chose to allocate the XTS to dealers based on past performance, says Chase Hawkins, Cadillac’s newly appointed vice president-sales. When the ATS starts hitting the market this month, all dealers will receive at least one model, he says.

Hawkins also reports the XTS assembly plant in Oshawa, ON, Canada, is running at full capacity. The ATS is being built at the auto maker’s Lansing, MI, Grand River assembly plant alongside the CTS.

In China, Cadillac’s expansion is moving full speed ahead, Butler says, confirming a goal set earlier this year by GM Chairman and CEO Dan Akerson of sales in the country surpassing the U.S. within five years.

But, as a brand, Cadillac arguably is further along than in the U.S., where GM spent much of the last decade rebuilding the marque’s stodgy image.

“As far as brand perception, it is pretty high,” Butler says, adding that Chinese consumers gravitate to its very American character.

Last year, a marketing campaign in China put a famous local actress on a road trip along the famed U.S. Route 66 to highlight Cadillac’s heritage.

“Luxury buyers there, like anywhere in the world, want to express themselves,” he says. “You have to offer a meaningful, relevant and distinct choice in the market.”

In Europe, Cadillac will make its return slowly, he says, having learned a lesson from its last crack at Europe with Kroymans Group of Belgium as its distributor. Butler says the venture ramped up too quickly and lacked the revenue to support its creditors, leading to collapse.

This time, Cadillac reached out to individual dealers and a 6-person staff runs the deployment. “We’re coming in lean and we’ll let it grow,” he says, noting Europe’s economic woes also play a role in the deliberate pace.

The ATS represents Cadillac’s key play in Europe, a right-sized vehicle for the region that it previously lacked. Diesel versions of the car are still planned for both Europe and the U.S. The car will make its debut in the region at the Paris auto show next month.