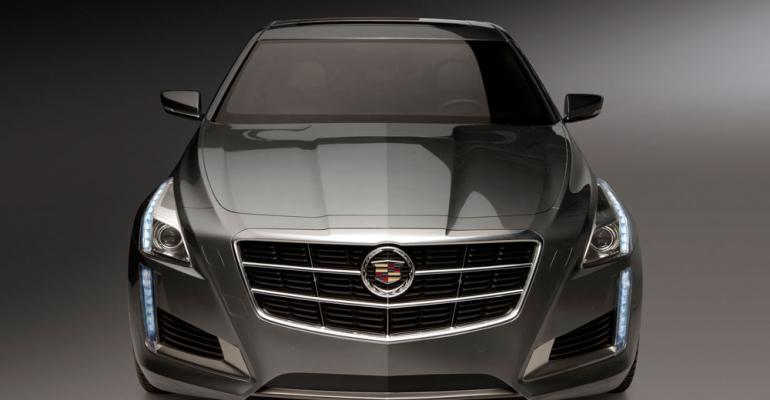 Exterior styling becomes more nuanced and the interior trappings leap ahead of the current model, which when it bowed in 2007 as an &rsquo;08 model marked a dramatic improvement over the first-generation.

NEW YORK – General Motors tonight will unveil in New York the ’14 Cadillac CTS, a third-generation redesign of brand’s core product and arguably the most narrowly targeted version of the 5-passenger sedan since it first arrived in 2002.

Due at dealers in the fall, the redone CTS most notably includes an all-new twin-turbocharged 3.6L V-6 with gasoline direct-injection technology mated to an 8-speed automatic transmission.

The powertrain, among GM’s most sophisticated and power-dense in its history, comes as part of a new “V-Sport” performance trim level meant to bridge the gap between volume CTS models and range-topping V-Series variants with 550-hp V-8 engines.

The “3.6L TT,” as GM will badge models with the twin-turbo V-6, also cements the CTS as a legitimate competitor against higher-performing models within the BMW 5-Series, Mercedes-Benz E-Class and Audi A6 lineups.

“The new CTS is more powerful, more refined and more luxurious,” Dave Leone, chief engineer-luxury and performance cars at GM, says last week during a sneak peek at the car in Detroit ahead of the New York International Auto Show, where it breaks cover to the public on Wednesday. “It will also have the most agile driving dynamics in its class.”

Sales of the Lansing Grand River, MI-built CTS could use a boost from the new model. Deliveries tumbled 14.6% last year to 46,979 units from 55,042 in 2011, according to WardsAuto data. Sales of the model, which brought Cadillac’s revolutionary Art & Science design philosophy into production in 2002, peaked in 2005 at 61,512.

So far this year, with the additions of the XTS large sedan and ATS compact sports sedan, Cadillac sales are up 32%, WardsAuto data shows. Last year at this time, volume was down 28%.

According to Leone, a key advantage for the new CTS will be its power-to-weight ratio, which at 420 hp for the twin-turbo V-6 and slightly more than 3,600 lbs. (1,620 kg) will be class-leading. The car also will include GM’s magnetorheological suspension technology, which adjusts  damping in a split second to adapt to changes in the roadway and driving aggressiveness.

The standard powertrain will be the 2.0L turbocharged 4-cyl. engine with GDI and 6-speed automatic transmission to debut last in the ATS. A 3.6L GDI V-6, updated last year, also will be available and mated to a 6-speed automatic.

Exterior styling becomes more nuanced and the interior trappings leap ahead of the current model, which when it bowed in 2007 as an ’08 model marked a dramatic improvement over the first-generation.

“This is arguably the biggest step” for CTS styling, says Mark Adams, design chief for Cadillac. “It is more sophisticated, with a bolder front end, taking the Art & Science design philosophy to a new level.”

A major addition to the exterior design is a character line stretching the length of the car, just below the greenhouse and from headlamp to taillamp emphasizing the long body, taut shape and longitudinal drivetrain.

The new CTS is 5 ins. (12.7 cm) longer than its predecessor and the wheelbase adds 1 in. (2.5 cm) for more rear-seat legroom and a smoother ride. It’s also 1 in. lower, creating a long dash-to-axle proportion that conveys an athletic appearance, GM says.

The track width adds 2 ins. (5.1 cm) to give it a planted stance and a more confident road feel.

“We wanted it the right size for its segment,” says Mark Smith, lead exterior designer on the CTS. “The car had to get a little bigger and more upscale. “We also wanted to make sure we didn’t clothe it in skin that sent the wrong message,” he adds, referring to cues highlighting its new proportions.

Inside, the new CTS becomes more luxurious with supple materials such as premium leather and suede, and trim of chrome and authentic wood is applied more generously.

“I’m particularly pleased with the interior,” Adams says. “It has a wonderful handcrafted feel. It feels like a bespoke interior.”

The car will offer eight distinctly different interior “environments,” including six different 2-tone combinations, and buyers will be able to plug-and-play other interior elements at dealerships to create a genuinely personalized purchase experience.

“Our goal was to create an optimal balance between sport and luxury,” says Keith Fisher, lead interior designer on the CTS. “We think we created a bold design statement.”

On key element is the 1-piece wrapped upper instrument panel flowing from the base of the windshield down the center stack and blending with the Cadillac CUE infotainment system’s 8-in. (20.3-cm) display and touchscreen.

Pricing will be released closer to the car’s launch, but expect its sticker to match key segment rivals. “We will price with confidence,” Leone says.

For years, the CTS undercut the pricing of similarly sized luxury cars to attract buyers. That left it straddling the line between entry-level luxury and middle luxury, where it now must play exclusively with the arrival last year of the entry-level ATS.

“We’ve asked the CTS to do a lot over the years,” says Cadillac U.S. marketing chief Don Butler. “We’ve got it properly positioned now.”