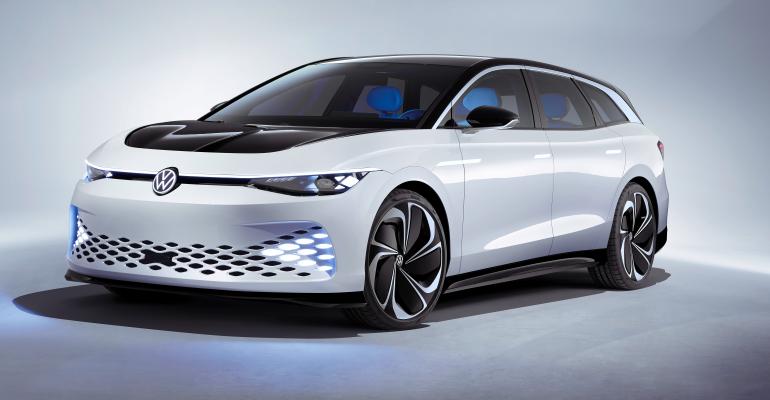 No word yet on whether German-built ID. Space Vizzion will be sold in North America.
Industry News>Auto Shows

The electric-powered concept combines crossover and wagon elements in a spacious addition to Volkswagen’s ID. lineup.

Volkswagen previews its plans for a new electric-powered crossover-style wagon with the unveiling of the ID. Space Vizzion on the eve of the 2019 Los Angeles auto show.

The luxurious new load-hauler, boasting a claimed range of up to 300 miles (483 km) on the EPA test cycle, is the eighth in a long line of ID.-branded concepts revealed by the German automaker, which has laid out plans to produce up to 1 million EVs per year by the end of 2022.

The ID. Space Vizzion will go into production alongside the ID. Vizzion sedan at VW’s Emden plant in Germany in 2021. Both models are planned to wear the ID. 5 model name, according to senior VW officials who suggest the production version will hold to the concept in terms of appearance and technical specifications.

The latest ID. concept updates the styling revealed on the earlier ID. Vizzion sedan at the 2018 Geneva auto show with various elements that help link it visually with VW’s latest Passat Estate, including the shape of its headlamps, which feature a range of intelligent functions, including “hello” and “goodbye” animation.

But while the design of the Passat is heavily dictated by the space dedicated to mounting a combustion engine within its front end, the ID. Space Vizzion reflects the inherent packaging advantages of its electric driveline with a lengthy cabin and spacious wheel wells housing 22-in., aerodynamically optimized wheels shod with 255/35 profile tires.

Despite its relatively large frontal area, the latest member of the ID. family possesses more aerodynamic properties than any existing VW model with a drag coefficient of 0.24.

The new concept boasts a clean and uncluttered interior (left) with no physical switches or buttons. All controls are concentrated within touchscreen panels or displays, including those of the steering wheel whose design is inspired by that used by past VW models.

The automaker says the ID. Space Vizzion can support either rear-wheel drive or 4Motion all-wheel drive.

Energy for the electric motors is provided by an 82-kWh lithium-ion battery mounted wholly within the floor. It can be charged to 80% of capacity within 30 minutes on a 150-kW system.

A decision on whether the production version of the ID. Space Vizzion will be sold in North America is yet to be made, according to VW.