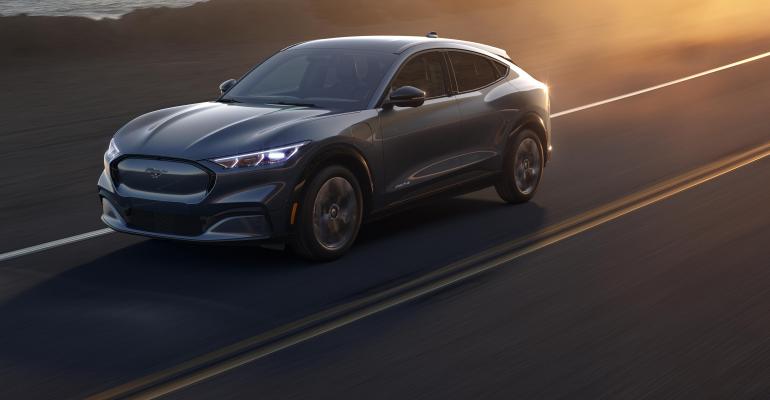 Electricity in the Air As Ford Unveils 2021 Mustang Mach-E

Ford’s electrification effort shifts into high gear with the introduction of the Mustang Mach-E, an all-new performance electric CUV that goes on sale in late 2020 with a starting price of $43,895.

LOS ANGELES – The tires chirp ever so slightly as our test driver runs through a 40-mph (64-km/h) slalom course on an airfield here near the hangar where Ford today reveals its all-new ’21 Mustang Mach-E performance electric CUV.

Despite that aggressive maneuvering, the chassis stays flat and stable through the orange cones as part of a 2.5-mile (4.0-km) test ride that includes a quick lap on city streets with the driver giving us a good sample of the car’s acceleration and regenerative-braking capabilities.

The idea that an electric car also can be a performance car is key to Ford’s introduction of the Mach-E, the much-ballyhooed “Mustang-inspired” CUV that now is a reality and will go on sale by the end of next year.

Bringing together the Dearborn automaker’s electrification expertise and the company’s most iconic global brand means the 4-door, 5-seat hatchback CUV is imbued with a handful of the pony car’s styling cues and a healthy measure of electric-only performance good for sub-4.0-second 0-60 mph (97 km/h) times and up to 300 miles (483 km) of range.

The Mach-E is the first full battery-electric vehicle in a line of 40 new BEVs and hybrids Ford plans to introduce by 2022 as part of an $11 billion investment in electrified vehicles, including all-electric F-150 and a hybrid Ranger.

The Mach-E arrives late next year in First Edition and Premium trims, the first of five versions due by spring 2021 ranging from the base Select model to the maximum-range California Route 1 to the high-performance GT.

Estimated power outputs vary from model to model, depending on whether the drivetrain configuration and battery size are optimized for range or performance. The standard motors, larger on the rear axle and smaller up front, were developed in-house by Ford engineers.

Two LG Chem-supplied lithium-ion battery packs are offered, the standard-issue 288-cell, 75.7-kWh battery, and the extended-range 376-cell, 98.8-kWh unit. Depending on configuration, range estimates vary from a low of 210 miles (338 km) for the base model with AWD to 300 miles for Mach-Es equipped with RWD and the larger battery.

An optional 240V in-home charger, the Ford Connected Charge Station, can be installed with assistance from an Amazon Home Services-vetted electrician. The 48-amp unit charges at a rate of 32 miles (51 km) per hour, Ford says.

Perhaps the clearest indication that this isn’t Lee Iacocca’s Mustang is the completely blocked front grille – Ford stylists call it a “shield” – with no need for openings other than the active shutters on the lower valance to provide cooling air for battery and motor temperature control.

The relatively short hood is made to appear longer by pushing the A pillar rearward, the wheelbase is stretched to increase front-axle-to-cowl distance, while side scallops, muscular rear haunches and triple-bar taillights give the Mach E enough “Mustang” sportiness to pass muster. The tall stance is masked by a roofline edge that is blacked-out as it rises toward the rear pillar.

The interior feels spacious, with ample leg and head room throughout, and good cargo room behind the second row. Because the battery is positioned under the floor and the motors are situated on the axles, the space under the hood is wide open for gear as well. A bonus feature of what is dubbed the “frunk” is a built-in drain plug allowing the front cargo area to be used as a tailgating cooler or as a washable space for muddy boots or gear. 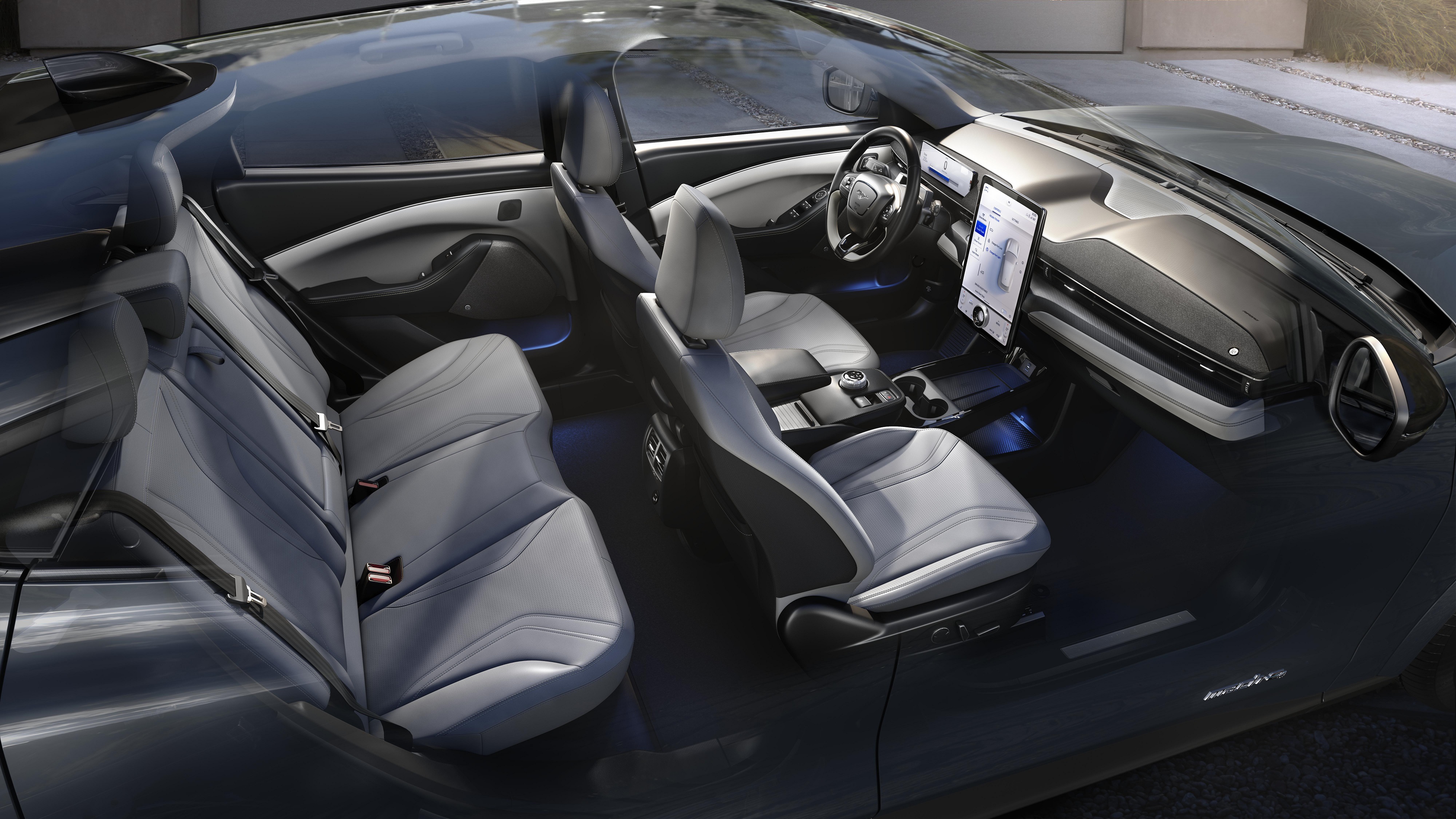 Technology is central to the Mach-E, which features a huge 15.5-in. (39.4-cm) vertical touchscreen that uses the latest SYNC operating system. The next-generation system uses machine learning, natural voice recognition and over-the-air updates to keep the interface simple and functional.

The Mach-E offers three driver-selectable modes, Whisper, Engage and Unbridled, each providing increasingly more aggressive steering, throttle and regenerative braking response, along with different instrument cluster graphics to match. Simulated propulsion sounds are piped in through the audio system, but even the Unbridled setting is fairly subdued.

In addition to one-pedal driving capability via regenerative braking, the Mach-E gets a full complement of driver-assistance aids including lane-keeping assistance and full-range adaptive cruise control. The hardware to enable hands-free highway driving will be installed in First Edition, Premium and GT models, but won’t be enabled at launch. An over-the-air update will turn on the system once final validation is completed.

As part of the global launch in Los Angeles, Ford opens the order system allowing prospective buyers to put down a $500 deposit on their choice of a Mach-E. 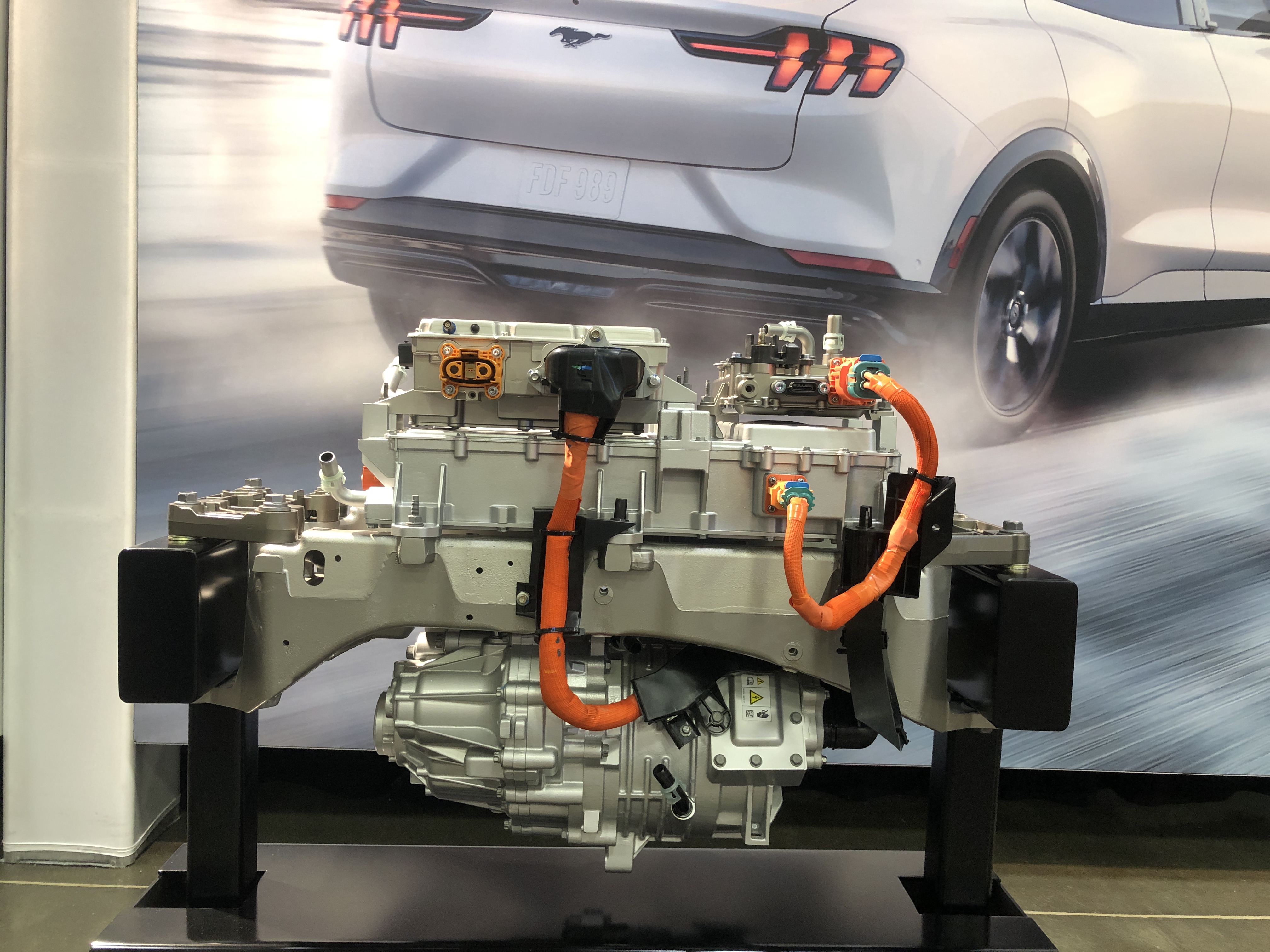