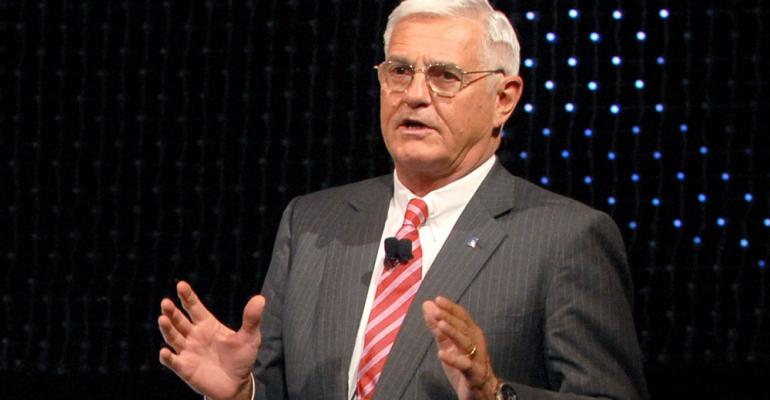 He credits them with helping to get the U.S. auto industry back on its feet. “The biggest recent development is the resurgence of domestic automakers,” Lutz says at an event held in conjunction with the National Automobile Dealers Assn. convention here.

Lutz gives kudos to Alan Mulally, who headed Boeing before becoming Ford CEO; Sergio Marchionne, an accountant who took the reins at Fiat and then Chrysler, which Fiat now owns; and Dan Akerson, a telecommunications and private-equity executive who became CEO of General Motors.

“They all are common-sense businessmen,” Lutz says. “While not auto experts, they realize the importance of superior product.”

Akerson retired this month. Mary Barra, a GM veteran and the first woman to head a major auto company, succeeded him.

“She is highly experienced, a strong leader and an engineer by training,” Lutz says of Barra. “She is not one to cheapen product to save a few pennies.”

Such ill-advised frugality became the bane of domestic automakers as they heavy-handedly squeezed costs and ended up creating inferior cars, starting in the 1980s, he tells the American Financial Services Assn.’s Vehicle Finance Conference.

“In Detroit back then, there was not a lot of logic,” says Lutz, who worked for all three domestic car companies and prided himself as a product-development overseer. He was once called “the car czar.”

That’s changed. “Great technology, great cars and great innovations are coming from the domestics,” Lutz says. “Who would have thought GM would sweep the Consumer Reports ratings and win both the North American Car and Truck of the year awards this year?

“And how about Ford taking an incredible risk to use aluminum to take 700 lbs. (317 kg) out of the new F-150 pickup? That is the sort of technology we once thought would only come from the Germans, not the Americans because they never did anything new.”

As a result of vast improvements in domestic vehicles, “it is very tough for foreign automakers to gain meaningful levels of market share,” Lutz says.

In a conference Q&A, he says the three vehicles he takes the greatest pride in developing are the Dodge Viper, because it proved in the 1980s that moribund Chrysler could make a head-turning super-sports car; the Ford Explorer, because it became a best-selling SUV; and the Chevrolet Volt, an extended-range electric vehicle. Lutz calls it “a technical masterpiece.”

An audience member, in a two-part question, asks Lutz to name vehicles he signed off on, but later regretted developing. He doesn’t answer that question.