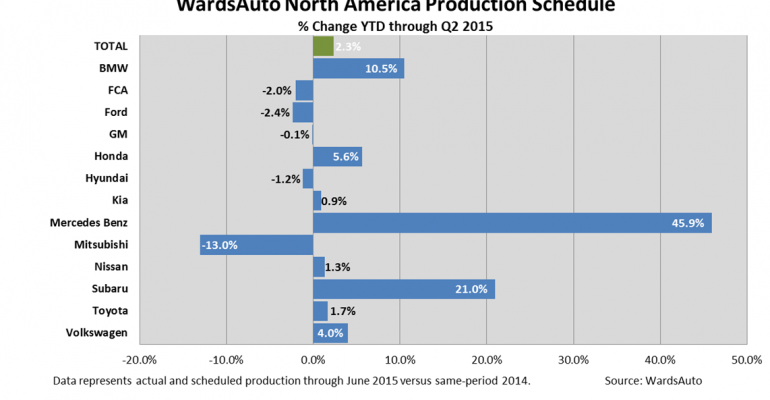 Although this year’s Q2 slate was pared by 20,000 units, the cuts focused mainly on Ford, where the automaker’s reported April-June output plan came in 22,500 units lower than what had been previously forecast.

Even then, a comparison of Ford’s Q2 plan to the prior forecast is mixed, with a 29,200-unit shortfall in trucks partially offset by an additional 6,700 car assemblies.

However, while Ford truck plans also include a downward revision of an estimated 5,000 units in April and 8,000 in May, car assemblies in April are expected to conclude at an estimated 1,200 units above forecast, with May up by 16,400

The only other significant cut came from FCA, where an 8,000-unit June cutback is partially offset by a 2,000-unit gain in April-May. Unlike Ford, most the Chrysler action is on the car side, where U.S. output has been pared back by 7,500 units, offset by a modest 500 increase in Mexico.

On the positive side, Honda is boosting output for the quarter by 4,000 cars and 2,500 trucks, while Mazda adds 1,000 units to its Mexico car production plan.

To some degree, the latest Q2 cuts reflect automakers pulling some production forward into the first quarter to boost dealer inventory. That was particularly evident in March, where final output rolled in 38,300 units above plan.

All of that gain was in trucks, where production bested plan by 46,900 units, offset to a minor degree by a 2,500-unit shortfall in cars.