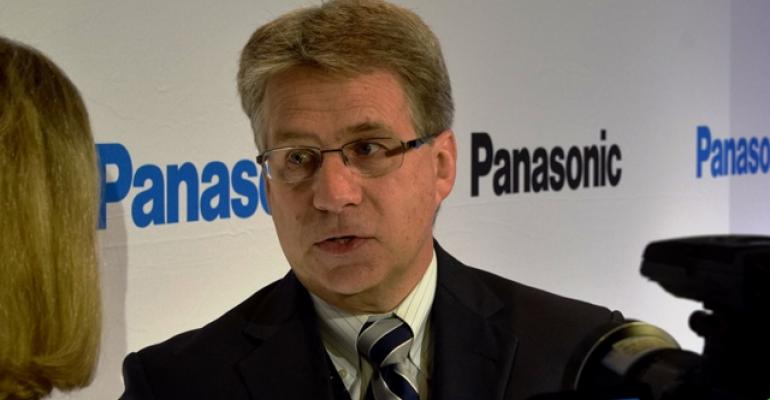 At CES, the electronics supplier is rolling out its new Aupeo customized Internet radio service and emphasizing its role in developing Ford&rsquo;s third-generation Sync telematics system.

LAS VEGAS – Panasonic, a giant in home entertainment and televisions, has many reasons to exhibit at the Consumer Electronics Show. Among them: to remind the world it makes more car stereos than any other company on the planet.

At this year’s show, the supplier is rolling out its new Aupeo customized Internet radio service and emphasizing its role in delivering Ford’s third-generation Sync telematics system.

The Panasonic booth hosts the redesigned Ford Mustang with the new third-generation Sync system as well as a Jaguar equipped with Aupeo (pronounced aw-PAY-oh).

Jaguar is the latest OEM offering the personalized radio service. Some 5 million vehicles worldwide already have Aupeo onboard. Other customers include Ford, Volkswagen, Mercedes-Benz, Audi, BMW and Toyota. Headquartered in Germany, Aupeo was formed in 2008 and is a subsidiary wholly owned by Panasonic.

Based in Japan, Panasonic abides by the principle governing many suppliers to manufacture goods close to the customer. The company produces stereo units and speakers in Mexico, and heavy demand occasionally requires plants in Malaysia, Thailand and China to supplement output for North America, Gebhardt says.

Customized streaming audio is not terribly new. Pandora has made its name in this space, allowing consumers to create radio stations based on the type of music they like. By learning preferences – and dislikes – Pandora can tailor a musical rotation just for you.

The new Aupeo is designed to be much more, Gebhardt says. “You don’t want to listen only to music in your vehicle.”

Instead, consumers want variety: specifically, entertainment, navigation, news and traffic. “They’d like social (media) if they can get it, but that’s still a bit of a stretch,” he says. “But at least those four, they want all of them.”

The new Personal Radio by Aupeo incorporates all four categories. “You want on-demand weather? Boom, go to on-demand weather rather than having to wait” for meteorology reports on terrestrial radio.

The system has templates built in, for instance, to provide weather, then news, every time the driver gets in the vehicle. Content partners include CBS Radio News, TheBlaze Radio Networks, AccuWeather, GEO Traffic and American Public Media. Panasonic expects additional content providers to join the system.

The system doesn’t have to be static, either, and it will learn the customer’s habits and weekly preferences. “You do things differently on Saturday than you do on Tuesday,” he says.

“So it will know on Saturday you may only want to hear news and music. You don’t care about traffic because you know you’re going to the store, you’re going local. It will configure to whatever your personal needs are. Then you decide, rather than having some programmer at the radio station decide.”

At next week’s North American International Auto Show in Detroit, Panasonic will unveil its eCockpit concept, which incorporates a full-color head-up display, a 12.3-in. (31-cm) reconfigurable instrument cluster and an 11.6-in. (29-cm) central display screen designed to resemble a tablet. All the components are meant to be user-friendly and intuitive.

A Panasonic prototype displayed recently in Detroit used two knobs that float directly on top of the high-definition touchscreen to control radio volume or station tuning. With the swipe of a finger, those same two knobs also can be part of the climate control to adjust the temperature for driver and passenger.

Knobs were added to the concept because consumers have said repeatedly they do not want a system that relies entirely on capacitive touch sensing. “Consumers wanted their knobs back,” Gebhardt says.

The knobs can be placed on the display screen wherever the OEM wants. The system can accommodate multiple knobs, he says.

Panasonic does not yet have a contract for the eCockpit, but Gebhardt says certain elements of the system will be appearing soon in production vehicles.

Panasonic also is proud to have won the contract to work with Ford in developing the third-generation Sync human-machine interface, which will debut on all new ’16 Ford models.

The system will replace MyFord Touch and MyLincoln Touch, which proved unpopular with consumers for their complexity.

Panasonic had little experience working with Ford but gained a small amount of business with the automaker after the purchase several years ago of Sanyo, which had been one of Ford’s preferred suppliers as part of the automaker’s Aligned Business Framework, says Scott Kirchner, Panasonic Automotive’s vice president-engineering and chief technology officer.

Ford invited Panasonic to bid on the contract in spring 2013 after several other Tier 1 suppliers had been doing the same as part of a design competition, Kirchner says.

“I got the question from my boss: ‘Can you win this?’ I said, ‘I can win any fair fight, but I’m two months behind.’” Despite bidding late, Panasonic won the business on every criterion Ford was judging, Kirchner says.

“It was one of the best moments of my career,” he says.