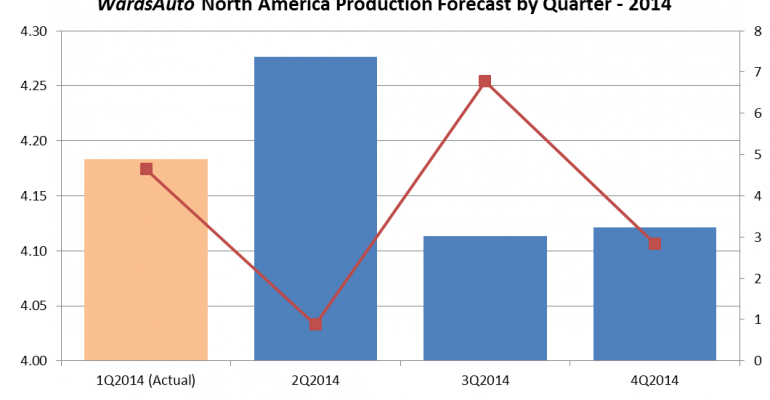 A red flag to watch for is extended shutdowns beyond traditional summer downtimes, especially at Ford, Fiat-Chrysler and General Motors. Other automakers could add downtime, but most likely would slow production.

Rising demand and new products will reignite North American production in the second half of the year, following sluggish results in the current quarter that will result in the slowest year-over-year growth since a decline was posted in Q3 2009.

Even in cases where there are heavy stockpiles on dealer lots, manufacturers generally seem more inclined to maintain strong production schedules rather than slow assembly lines, although they are doing some of that, too. WardsAuto expects the scales to continue tipping more toward price discounting in the remainder of the spring and summer to cull inventory where needed as opposed to a swath of production cutbacks.

However, if sales stall in May and June, lower Q3 production definitely looms.

A red flag to watch for is announcements of extended vacation and model changeover shutdowns beyond traditional summer downtimes, especially at Ford, Fiat Chrysler Automobiles and General Motors. Other automakers could add downtime, but most likely would fly under the radar simply by slowing production.

Ford and GM normally schedule plants for two weeks of vacation downtime in July or August, while other manufacturers slate one week or long weekends.

Conversely, some downtime will be canceled at plants building hot sellers, but not to the extent seen in recent years when automakers were scrambling to keep up with surging demand.

Production Down Year-to-Date at Ford, Honda, VW, Others

The current weakness is coming from Ford, Honda, Hyundai, Subaru and Volkswagen.

Ford already is using short-term closings at some plants for inventory control. The automaker’s year-to-date production through April was down 5.6% and is expected to stay below 2013 levels through the end of the year due to flat sales of some models and tooling-related production slowdowns for the redesigned F-150 pickup and Ford Edge CUV.

Ford already started output of two new models in Q2, the all-new Ford Transit and Lincoln MKC, and the redesigned Ford Mustang begins in July. But the automaker’s production won’t turn upward until the new F-150 and Edge are ramping up in 2015 after Q4 2014 starts.

Declining sales are the reason behind year-to-date production shortfalls at Honda, down 1.6%, and Volkswagen (19.9%). Growth for both is expected to resume in second-half 2014 after inventory is pared for most of their slow sellers, although nagging high Accord inventories give Honda the same problem as several other automakers, too much stock of midsize cars.

Subaru, down 4.3% year-to-to-date, will roar back after redesigned versions of the Legacy and Outback ramp up. Both models begin production in June. Hyundai follows the same pattern as Subaru. Sales-related production slowdowns will be offset in second-half 2014 by production of the redesigned Hyundai Sonata, which began this month.

Among the major manufacturers so far keeping 2014 production levels above last year are Fiat-Chrysler, GM and Nissan, with increases also posted by BMW, Kia, Mitsubishi and Tesla.

Toyota and Daimler are nearly flat with year-ago.

Besides stronger sales, lifting Nissan’s volume is first-time production of formerly imported vehicles. Late last year, Nissan added production of the Rogue – redesigned for the ’14 model year and flying off dealer lots, and it begins local production of the Murano in September. Also boosting its second-half outlook is the July launch of a version of its NV200 small commercial van for GM.

Other first-time local production includes the June start of the Mercedes C-Class at Daimler’s Vance, AL, plant and the Mazda2 in September in Mexico.

Fiat-Chrysler’s to-date output was up 13.8% from like-2013 led by gains from the new Jeep Cherokee and Ram ProMaster – both not yet in production a year ago – and Ram pickup and Jeep Grand Cherokee among others.

The automaker still is accelerating to full production of the redesigned Chrysler 200. Output of the car will help keep Fiat-Chrysler’s production levels well above year-ago in the third quarter, but its Q4 build is expected to decline from year-ago, in part due the Dodge Avenger having ended production and 2013 launch of Cherokee and ProMaster that make comparisons less favorable.

GM also is forecast to increase output over year-ago in Q3 and decline in Q4. The Q4 shortfall mostly is due to slowdowns for tooling changes at a couple plants, although demand for some vehicles, especially cars, is expected to flatten or turn down from year-ago totals.

North American Light Vehicle Production Down Slightly in April
May 14, 2014