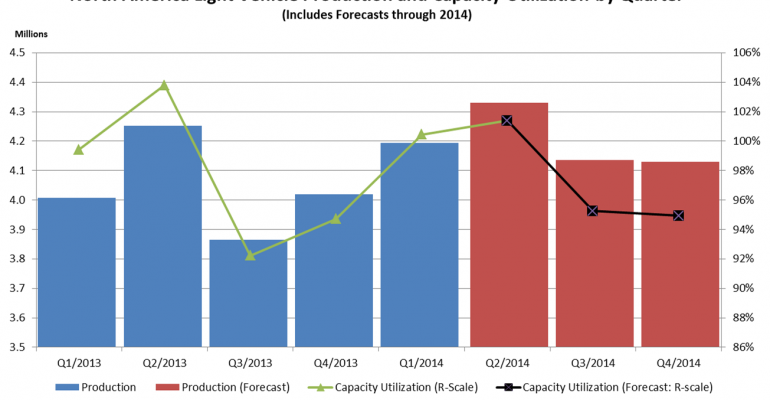 Even with inventory of domestically produced light vehicles overflowing at U.S. dealerships in some cases, North America manufacturers continue to plow ahead with hefty output, pushing many of their assembly plants to the limit.

Including April, there has been some culling of inventory this year through temporary plant shutdowns, but production continues at robust levels with several factories at Fiat-Chrysler, Ford, General Motors and Hyundai/Kia working overtime.

Year-to-date 2014 North America LV sales are up 1.3% year-over-year through March, with deliveries of domestically produced LVs up less than 1%. Growth in sales of domestic vehicles is expected to accelerate as recently added capacity gains speed and market competition in the U.S. gets more heated, likely leading to more aggressive pricing of some well-stocked models.

U.S. sales, after rebounding to a 16.3 million-unit seasonally adjusted annual rate in March from weather-dampened results in January-February, are expected to remain above a 16 million SAAR for the rest of the year, finishing 4.3% above 2013’s final tally. Sales in Canada and Mexico are forecast to end above 2013 by 1% and 2%, respectively.

First-quarter output of 4.19 million units was 4.7% above like-2013 and equaled a 100.4% capacity-utilization rate – production as a percent of straight-time capacity based on each plant’s capability if it worked two 8-hour shifts per day, five days per week. The utilization rate was the highest for the period since WardsAuto began recording the data in 2005 and slightly above like-2013’s 99.5%. With Q2 capacity utilization pegged at 101.4%, it will be the first time successive quarters top 100%.

The Q2 utilization rate is below like-2013’s 103.8%, but that’s in large part due to recently added capacity at Honda, Mazda and Nissan that is not yet up to full speed and temporarily diluting the rate.

In fact, estimated available production, which is straight-time production capability based on a plant’s actual daily and weekly schedule, totals 4.3 million units in the second quarter, 5.2% above like-2013’s 4.17 million.

For the year, available production is forecast at 17.9 million units, well above 2013’s 16.9 million, and highest on record.