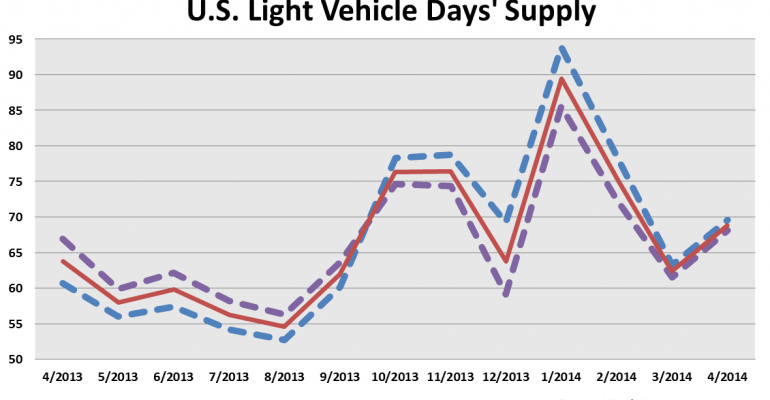 With Subaru understocked in the segment, nearly all automakers selling midsize cars, including Ford, GM, Honda, Hyundai, Kia, Mazda, Nissan and Toyota, could withstand some trimming to inventory in the segment.

U.S. inventory rode into May a little on the high side, meaning some manufacturers likely will continue with spot production slowdowns and another slight increase in month-to-month incentive activity is on tap – the same pattern as March-to-April.

On the whole, however, inventory levels are not excessive, and in some cases stocks are being built up in preparation for future production slowdowns due to retooling for major model changeovers. In fact, some vehicles are in catch-up mode to meet demand.

Conversely, production plans make it appear automakers are girding for sales to pick up strongly from the 15.7 million-unit seasonally adjusted annual rate for the U.S. market over the first four months of the year.

Even with short production stoppages in April that capped estimated North American output for the month to roughly even with like-2013, the portion built for the U.S. market still increased an estimated 4.1%.

Also, import shipments to the U.S. rose an estimated 17% in April from year-ago.

April 30 inventory of domestically made LVs totaled 2.99 million, nearly flat with the prior month, but 13.3% above year-ago. Days’ supply climbed to 71 from the prior month’s 69 and year-ago’s 65. Import inventory, at 674,000 units, also ended the month relatively even with March, and was 6.6% above April 2013. Days’ supply of 61 was significantly higher than prior-month’s 53, but little changed from year-ago’s 60.

A healthy April days’ supply for imports is in the mid-50s. However, despite rising North American production, including some new capacity replacing previously imported vehicles, import market share in April increased from the same year-ago month for the 10th consecutive time. Import penetration will decline in the latter part of the year as more new capacity comes in, but above-normal inventory gives the appearance importers want to take advantage of higher demand right now.

Light trucks, which persistently have outsold cars this year, ended April with inventory of 1.90 million units, an increase from the prior month of 1.7% and 10.6% above year-ago. April 30 days’ supply was 68, compared with 61 the prior month and 67 a year ago.

Inventory of CUVs, the fastest-growing segment group, is balanced with a 59-days’ supply, same as year-ago.

The only weak segment in the group is Large CUVs. Sales for the segment declined 10.3% year-to-date through April with the Ford Flex the only offering showing a sales increase, but its days’ supply was a sky-high 128. The Buick Enclave, Chevrolet Traverse, GMC Acadia, Mazda CX-9 and Nissan Pathfinder all have posted declines so far this year, and the segment’s April 30 days’ supply stood at a lofty 90 vs. year-ago’s 78.

Heavy inventory for Large Pickups and Large SUVs is expected to drive up volume for the rest of the year from a mix of incentive activity and demand for refreshed products in the segments.  No production slowdowns related to inventory are expected for the big trucks.

Most extra incentive activity or production slowdowns will be with cars. Car inventory ended April at 1.86 million units, a 2.3% decline from March, but 13.6% above year-ago. Days’ supply was 70, compared with 63 in March and 61 in April 2013.

The Small, Middle and Luxury Car groups all had higher-than-normal inventory for April.

Most sensitive is Middle Cars, which are dropping in sales as consumers switch to CUVs.

The only automaker legitimately understocked in the segment group is Subaru. Nearly all major automakers selling midsize cars, including Ford, General Motors, Honda, Hyundai, Kia, Mazda, Nissan and Toyota, could withstand some trimming.

The competition in Middle Car will get more intense as Fiat-Chrysler ramps up availability of its redesigned ’15 Chrysler 200 sedan, which currently has inventory equal to less than one-third of the older version a year ago.

Ford has been the most proactive in paring midsize-car inventory though production slowdowns, although GM has done the same to a lesser extent. Other automakers appear to be using incentives or simply letting stock levels ride in anticipation that demand in late-spring/early summer will be enough to cut them before resorting to summer clear-out sales or slowing third-quarter output.